Niagra to Iguazu via Gokta Falls in Peru

Almost 5 years ago we visited Niagara Falls not long after setting off from New York and a few days ago we visited Iguazu a couple of weeks before completing this incredible journey. And in the middle we visited Gocta Falls, 3rd highest, probably the remotest and least visited waterfall in the world, and by far our favourite. Iguazu is pretty amazing, but very touristy.

We saw a vast array of animals on our travels, the most recent and by far the most surprising was a rat the size of a sheep!?!?!

After holding back on the north western side of Argentina waiting for the storms in the west to clear, we caught the weather just right, have had no rain at all and it is still incredibly hot. We had been watching the weather at Iguazu for the whole trip and it continually forecast rain and thunderstorms, but all that cleared and it was blue skies and sunshine whilst we were there. The only downside was that there was so much spray coming up from the biggest falls it was hardly possible to see anything, but Iguazu is a collection of many waterfalls at different levels, with a number of different walkways at various levels so the views are spectacular.

We decided against going into Paraguay, other than being able to say we had visited another country there was nothing much that inspired us to go, there are only 2 crossings between Argentina and Paraguay and both sounded like they would be a hassle (queueing up with loads of Argentinians crossing to things that are not are either not available or a lot more expensive in Argentina) and we had already decided not to go into Brazil for the same reasons. Also many people (including Brazilians) that had been to both sides said that Iguazu on the Argentinian side was far better so was not worth going into Brazil.

Maybe we will go to Brazil one day, but by a different means of transport!

So, now we are in Uruguay and the intention was to do a quick circuit of the country to finish off with, but we are currently in a camp site with some thermal pools and we have just about ground to a holt.

We had a major blow out a few days ago on a gravel road, we must have hit a very sharp jagged rock as it went straight down and has destroyed the tyre, the cut across the tread is too big to patch properly and I cannot get the same make here, we still have one good spare but 2 of the rims are cracked with a tubes in it and apparently most of the east/west roads across Uruguay are in a pretty poor state and we don't want to risk any further wheel/tyre issues this late in the game.

The plan now is to park the truck, go home then will seriously look at shipping to Africa for the next adventure. 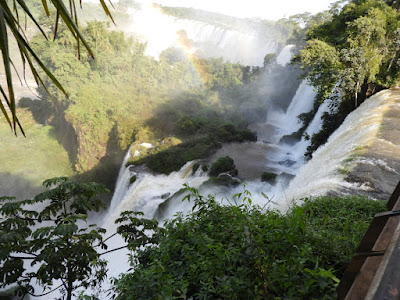 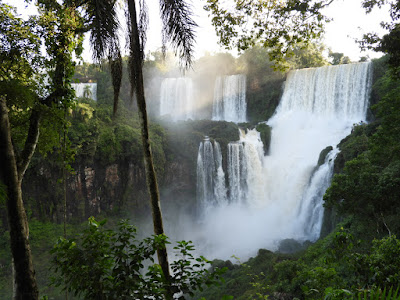 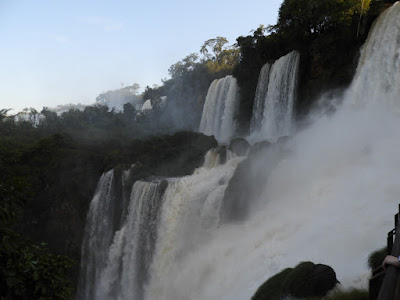 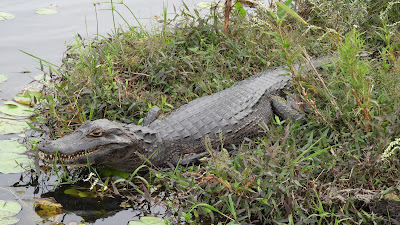 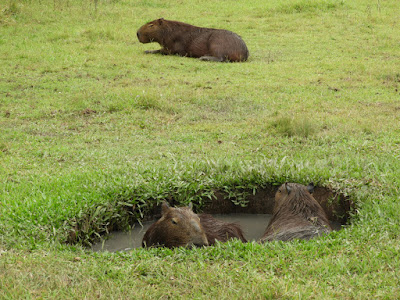 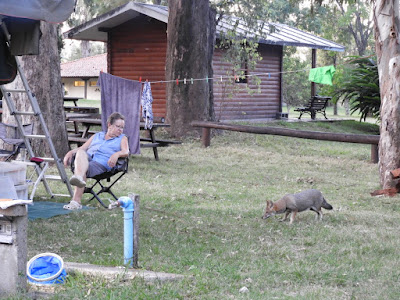 We have gone as far south as we are going this trip (Rio Tranquilo) and north as far as we are going (Cachi on the Route 40) and now we are heading east. Currently at Thermas Rio Hondo, just west of Santiago del Estero, we will now head east for around 650 miles and then north-ish up to Iguazu. Once I have sorted a dental issue for which I am currently in communication with my dentist at home for advice!!

We travelled North from Maipu through some pretty amazing scenery and mostly excellent weather. We got caught out one night when the forecast was for 40% chance of rain at 8am. Often that means no rain at all, but this time at 08.03 the first huge spots landed (you know the ones!) then the skies opened and it poured down for hours.The previous night it had been blue skies and calm and we did not bother to put on the fly sheet - mistake! the tent was perfectly dry inside, but taking it down would make everything wet. Eventually, we were paddling around in 2" of water (2.5 cm for those that don't understand our weird measuring system) so we had to bite the bullet, put all of the bedding in plastic bags and cover the mattress as best we could and take the tent down.

The next two nights we stayed in hostels and on the second day the sun shone so we erected the tent outside the hostel and within 2 hours it was all dry again and ready to go.

We continued north to Cafayate (another wine region with a number of wineries to visit) so decide to stay for 2 days. On the third day we intended to head north up R68, across the mountains to Cachi and back down the R40, but the first 30 miles was pretty much like all of the parks in Utah all rolled into one and we spent so much time doing littlewalks and taking photos we aborted the original 170 mile drive to Cachi and headed back to Cafayate. A few miles before the town we took a deviation to a winery and the restaurant looked so good that we booked the 5 course/6 wine lunch for the following day, so that meant another 2 nights in the camp site and a taxi back and forth to the winery the following day for another amazing lunch (though still does not beat Agostinos in Maipu).

Day 5 and having done the section of the R68 we wanted we now headed directly up the R40 (mostly gravel) to Cachi, a very rough road in places, but with amazing scenery all the way up. Cachi is another wine region but the town looks derelict until you get into its wonderful little centre, with a couple of top notch looking hotels and a good choice of restaurants (serving local wine which is also superb). They are obviously working to improve the town in general with cobbled streets replacing dirt roads and teams of painters painting buildings all over the place.

We stayed in Cachi for 2 nights before heading back down the R40 for another night in Cafayate (but this time with the go pro in action) and now,with the gravel roads behind us we are heading back east to Iguazu (one particularly dodgy tooth permitting!) 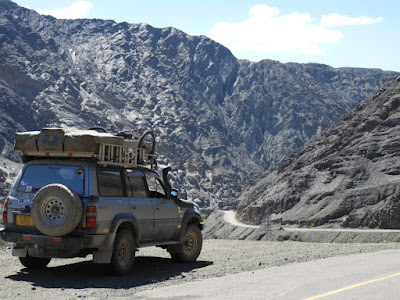 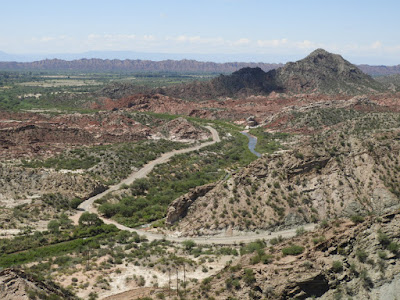 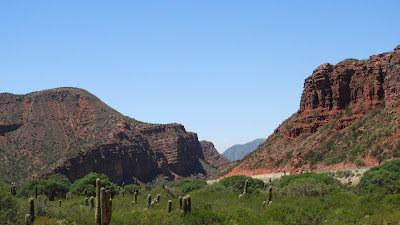 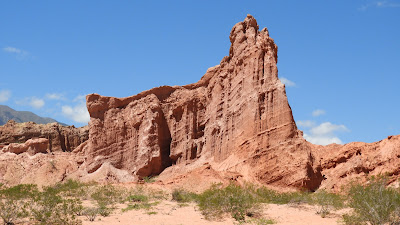 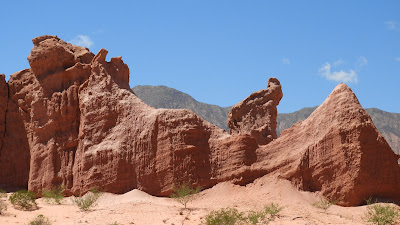 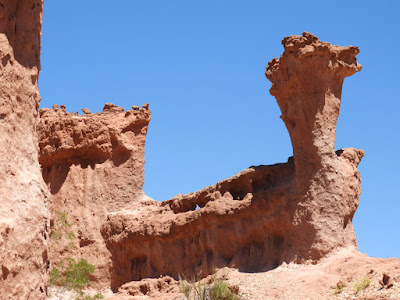 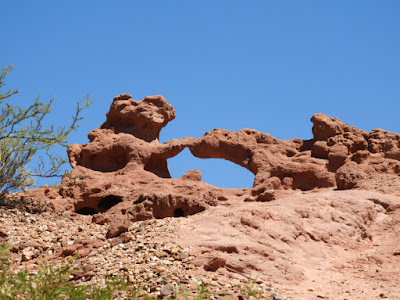 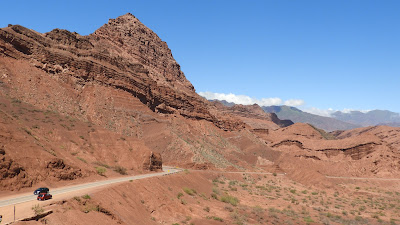 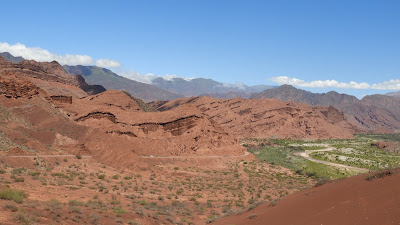 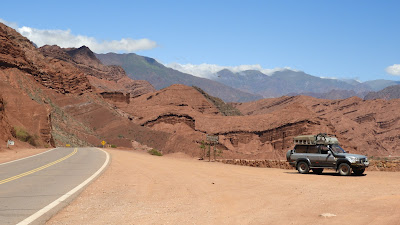 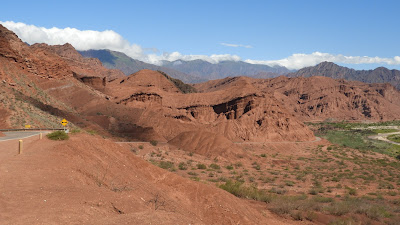 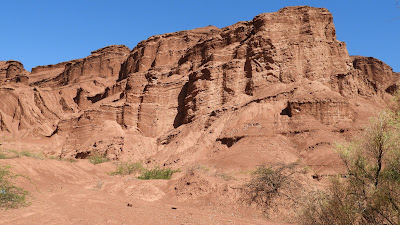 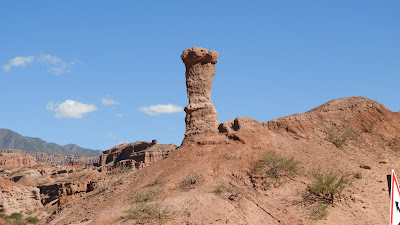 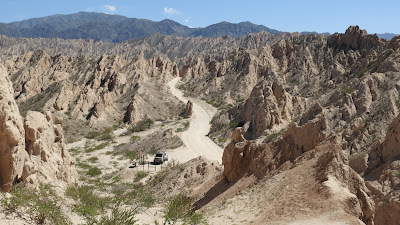 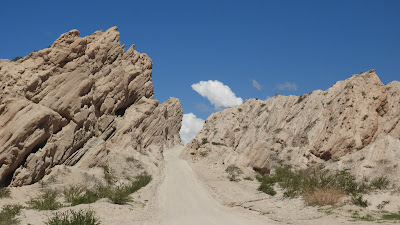 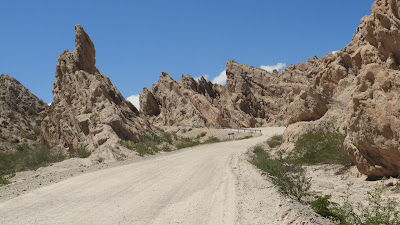