We are now in Volgograd over 400 miles into Russia and the first time we have had internet since the Hotel in Ukraine. It is like a parallel universe here, the Hotel could be anywhere in Europe, the standards are similar, the prices (except for deisel at 51p per litre) are similar and yet everything is different and you cannot make head nor tail of the writing, sign posts, menus etc. Suprisingly Romania was the most run down, worst roads and old traditions, but also the cheapest. The Russians go to the Ukraine on holiday as it is cheaper (except for fuel).

We have been travelling for the last week with Andreas a German who has has lived in Australia for a while and driven a Nissan Patrol from Australia, through Africa to Germany and is now on his way back through Kazakhstan, Mongolia and China.

After leaving the Hotel in Izmair we camped at an up and coming beach resort on the black sea coast and so impressed we have negotiated to buy 3 sea front chalets. 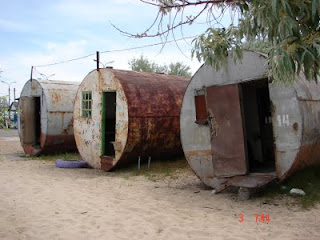 They need a bit of work. 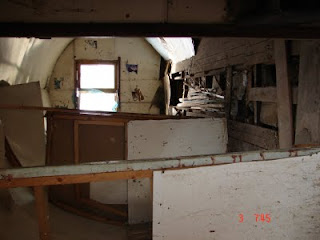 But one includes beds 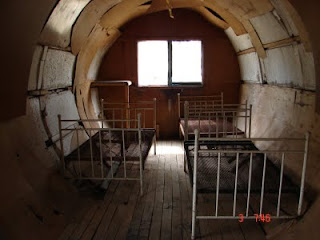 And another has a honeymoon ensuite. 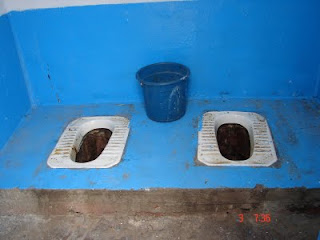 We then headed for the Souther Coast of the Crimea but could not get in. All along the coast west of Yalta the roads to the see front villages were barracaded and you have to either live there or have a Hotel reservation to get in!

We managed to get into Yalta, but left as quick as we arrived as it was jam packed, and wild camped in the hills. Further along the coast however we found a camp site on the beach for £4 per night so decided to stay for a few nights.

As we packed up to go on the second morning Andreas passed by honking his horn and waving, and then returned a few minutes later. We chatted so long we all decided to stay another night and set of together the following morning.

After a day sight seeing we found a secluded spot on a beach to wild camp, next to some Russians. After dinner the russians invited us over for Vodka!!!!!! and we stayed another nigth, no hang-over, but we would definitely have ALL failed a breathaliser!

From here we headed north up a track Andreas had found up the East coast of the Crimea, basically along a 60 mile strip between 100 and 500 metres long with beach on both sides. It quickly went from broken tarmac, to gravel to sand and we actually drove along the beach for about 12 miles, it was wonderful.

Another nights wild camp on a beach and then into Russia, after the most incredible thunderstorm in the early hours, and other than literally 2 drops of condensation after 3 hours of solid torrential rain the tent was completely dry, and we did not even have the fly sheet on! The ground we were on was completely waterlogged and had to use low box to get out and cross a now 70m wide and probably .7m deep stream to get back to the road.

Crossing into Russia took less than 3 hours, queueing and paper work and other than checking the underneath with a mirror we were not searched and on our way.

First night in a Hotel, another night wild camp on a beach, this time on a large lake, with Herons wading about looking for fish and now the Hotel Volgograd.

After breakfast Andreas heads south for Kazakhstan and we head north for Siberia, with the possibility of meeting again in Mongolia as we are taking opposite routes.
Posted by Mick at 21:44