Except for the last 3 day's sprint back across europe the long driving days are over and we are now taking a slow drive round the Turkish Coast to Bulgaria. It is raining today and cloudy yesterday but the 8 days before were in the mid 20's in the shade (mid to high 30's in the sun), blue skies and sunshine and we found a few nice beaches to camp on and a few old ruins to look at (and no I wasn't looking in the mirror!)

We hit the coast at Side, a town full of Roman ruins, some restored but a lot just sticking out of the ground all over the place. Chris particularly wanted to visit Side as she had camped here in 1976 on her way back overland from Singapore and wanted to see what it was like. Amazingly the beach she camped on is still pretty much the same as they have prevented building here due to the amount of ruins still not excavated.

After Side we gave Koray a call, he left Winslow a few weeks before we started our trip to come back to Turkey to open a Hotel and we said we would come and visit if we got to Turkey. Turns out it was Alanya and not Antalya as we thought, but they are quite close and Side is in the middle so no problem. We met Koray on the outskirts and he led us to the Hotel on his motor bike. We were expecting a small back street place, but turned out to be a 5 bed boutique hotel just beneath the Castle Walls with a fantastic view of the harbour and the bay and with a finish and attention to detail at least the equal of any 5 star property.

The evening before my 60th we camped at the Dragon Motel and camp site at Anamur (recomended) and met a Norwegian with a Russian wife staying at the Motel and toasted in my birthday with a bottle of Vodka and a glowing fire on the beach. Another protected beach but this time to preserve the beaches for the sea turtles to lay their eggs. It is not so much the building as the light as the mother turtle lays her eggs and goes back to sea, when the eggs hatch the babies follow the moon light on the sea and if there is any light on land they will go the wrong way. For this reason even the castle at the end of the beach cannot be lit up during the hatching season.

After Anamur we went back to the Centauera in Alanya for my Birthday, but just as well as it was high winds and rain by the time we arrived. According to the forecast we may get a little more rain tomorrow and the temperature is dropping even here, but should still be 18 to 20 and sunshine for the following 8 days, while we visit a few more sites including Ephesus and Troy and then up the Gallipoli Peninsular to Bulgaria.

The beach where Chris camped in 1976 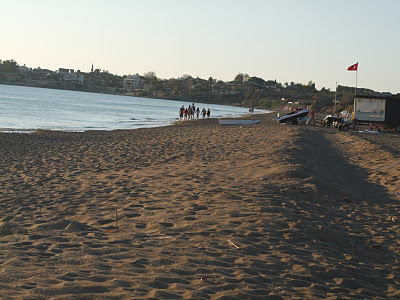 Apollo Temple in Side 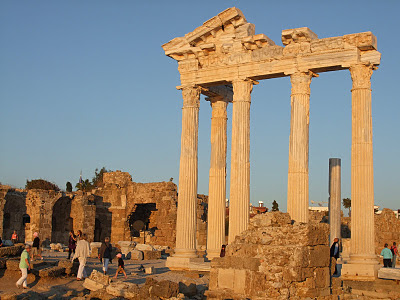 The Roman Amphetheatre at Aspendos 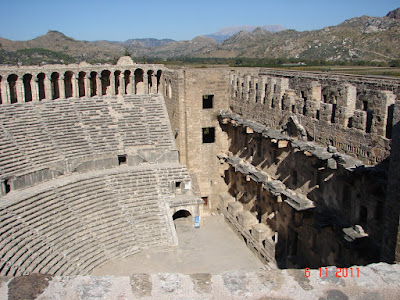 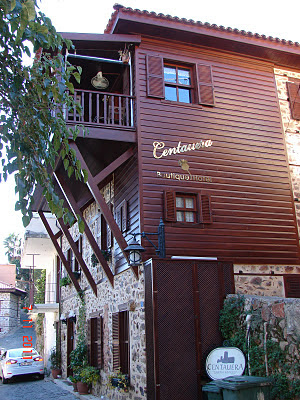 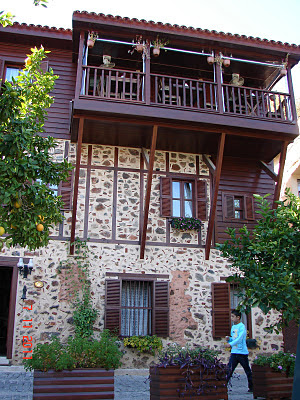 The garden at the Centaura overlooking the bay 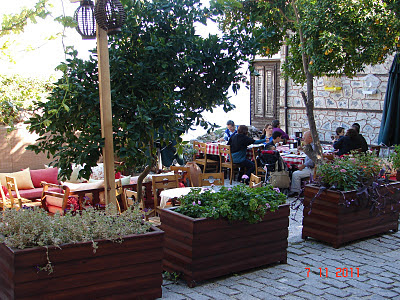 the view of the bay from the garden 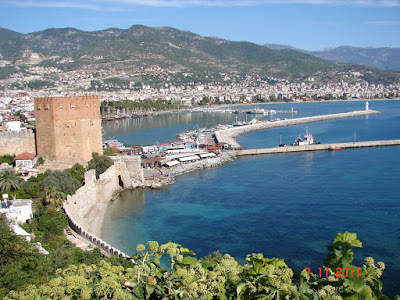 Koray with Chris at brakfast, Chris went traditional, but I
had sausage eggs, beans, tomatoes and onions - wonderful 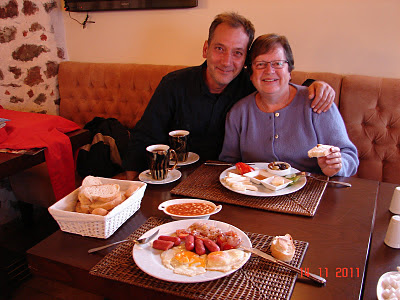 On boat trip round the penincular (Alanya) 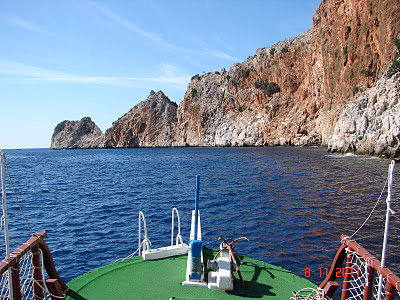 Views from the castle above the Centauera 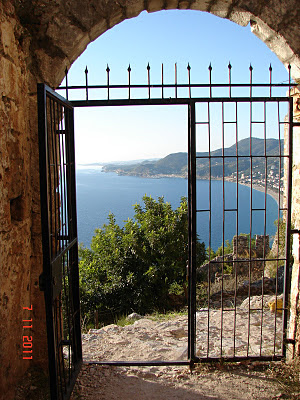 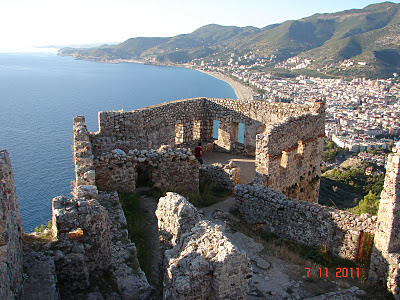 The Ancient Shipyard, below the Centauera 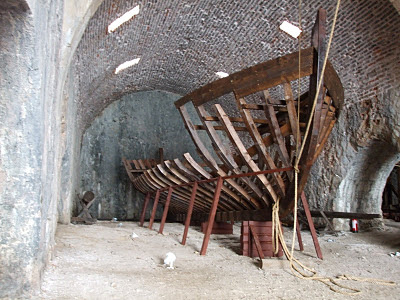 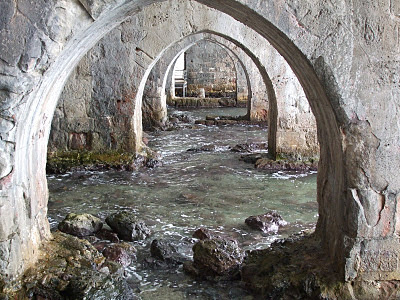 I am invited to a wedding lunch whilst out on a bike ride! I was starving at the time and looking for somewhere to eat but stopped to see what the drum banging and flute blowing was about and was invited in - magic! 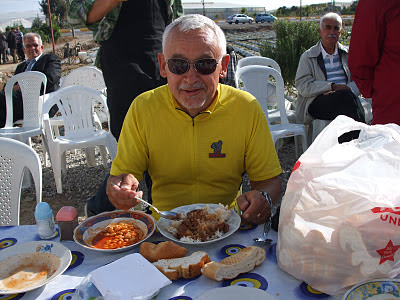 Anamorium - a 2000 year old City destroyed by an earthquake and in the main left just as it was and with very little restriction you can camber all over the ruins. 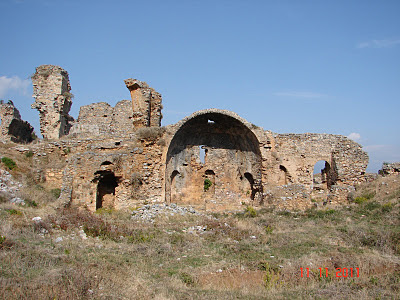 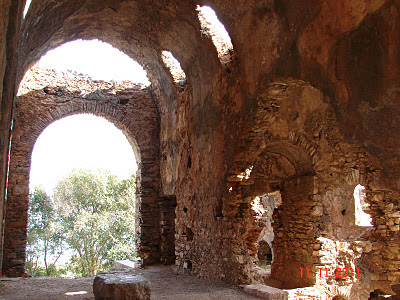 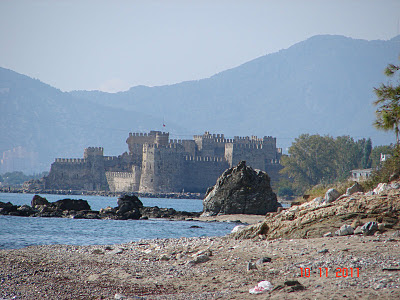 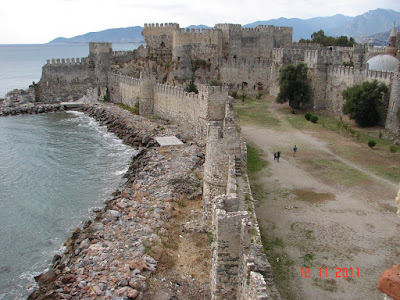