Up up and Away on Chris's Birthday

Finally I am able to upload the blog, after a couple of weeks with very little power or no internet (and never both at the same time) and are now in a cafe with internet in a small town in the middle of the jungle.

After 3 more days at Pearl Lagoon we all went back to El Rama for another night in a Hotel before saying goodbye to Shannon, Mike and Cisco, but not before being branded as savages by the Hotel Receptionist. All 3 bikers walked in covered with mud  as we arrived in a torrential downpour) and Cisco thought it best to remove his boots and outer gear inside the door to avoid spreading any more mud, but this left him walking around reception in his underpants!

After another night and a wonderful meal in Granada we made our way to Gigante on the coast for 4 days of rest and recouperation camped next to a really nice Hostel on the beach. The bad news was meeting some Canadiens with a RHD Toyota (imported to Canada from Japan) that were refused entry to Costa Rica (our next stop) due to the RHD. Two days later we head for the border, enlist the services of a fixer and $50 does the trick.

We then have a series of 1 night stops through the hills, including a night next to a really nice restaurant overlooking Lake Arenal, a dip in a Spa, which is actully a large hot stream in the jungle and a night in the car park of an Adventure Park. It is Chris's birthday the following day so we do a hanging bridges walk in the morning and take on 9 zip lines up to a mile long before heading back to the coast and hot weather once more.

Another night in a restaurant car park, 2 nights at what looked like a refugee camp (we only stopped 2 nights because they had a washing machine) and now we are at  Puerto Jiminez, on the Osa Peninsular joined yesterday once more by Shannon and Mike (Cisco went his own way a couple of days before). Sadly they are no longer with Ducatti the Chihuahua who fell from a ledge at their camp site on Ometepe and broke his neck, RIP Ducati.

The camp site we are at is really amazing, just behind the beach (with water so calm and warm you hardly notice you are in) and close to the town, is full of wild life.Iguanas roaming the ground and up in the trees, one even tried to pee on me from high in a tree because I was getting to close to its mate on the ground. Scarlet Macaws arguing high up in the trees, the occasional Toucan landing in the tree next to us, plus a multitude of other birds large and small. The stars however are two young crocadiles in the small lagoon next to camp, currently 3 and 4 metres respectively will eventually grow to over 5 metres. The camp owener took meat to the shore last night and they both came up on the bank to feed.

We have been at panick stations over the last few days once we got the news that the ferry service from Panama to Columbia ceases on April 20, so lots of research and emails looking at crossing now and taking a flight back from Bogata instead of Panama,  in the end we decided to stick to the plan, but we have met a number of overlanders that have speeded up to make the ferry before it stops running. We are now back to shipping by container in June as there were too many things to re-arrange and go wrong in too shorter time. 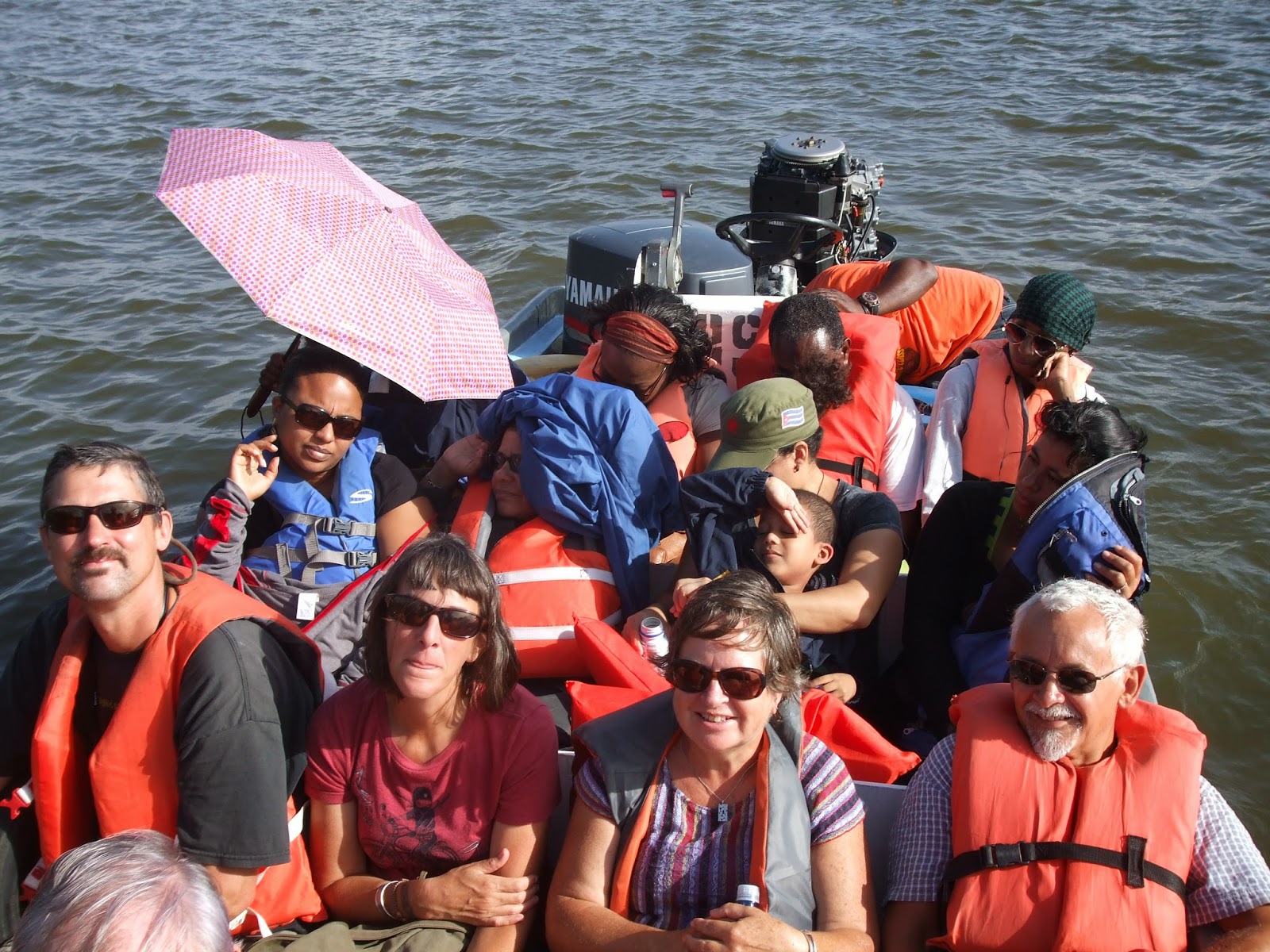 Mike, Shanon, Chris and I doing our Vietnamese boat people impression, I was smiling at this point, but not for long! 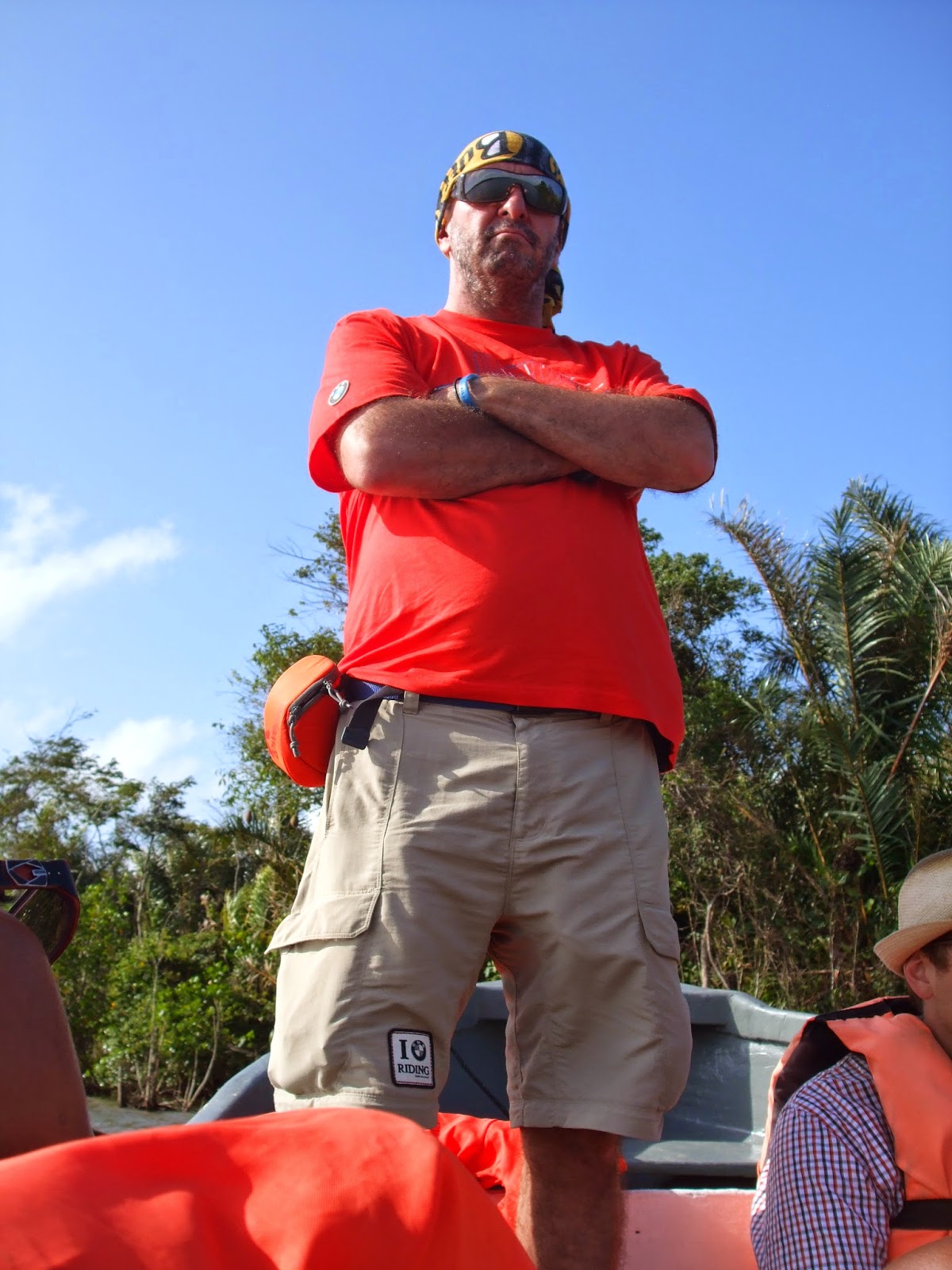 Cisco, looking like the slave overseer on a Roman Ship 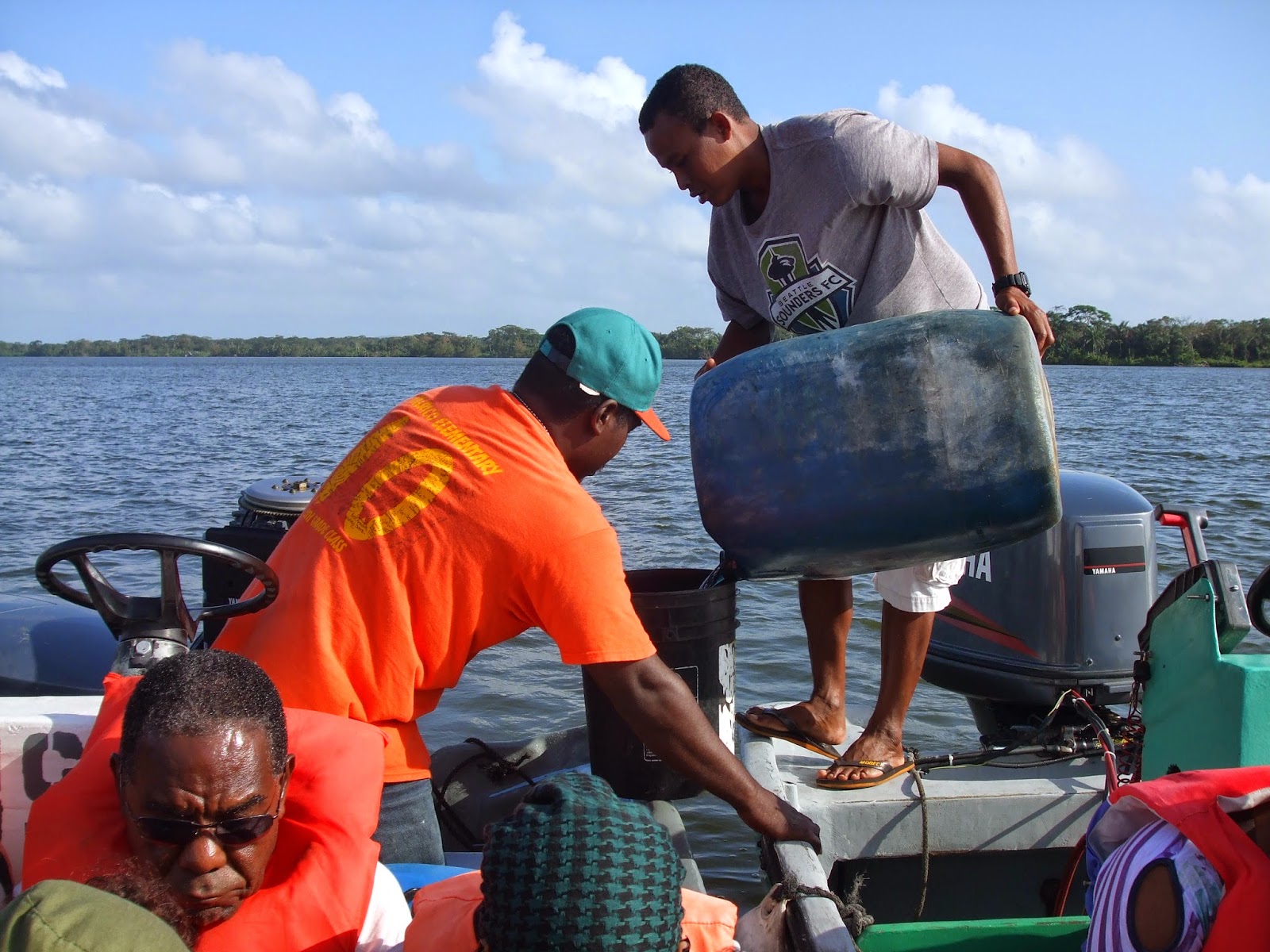 Our third of 4 breakdowns on our trip to Bluefields, they think it is dodgy fuel so a guy from another boat provided his fuel. 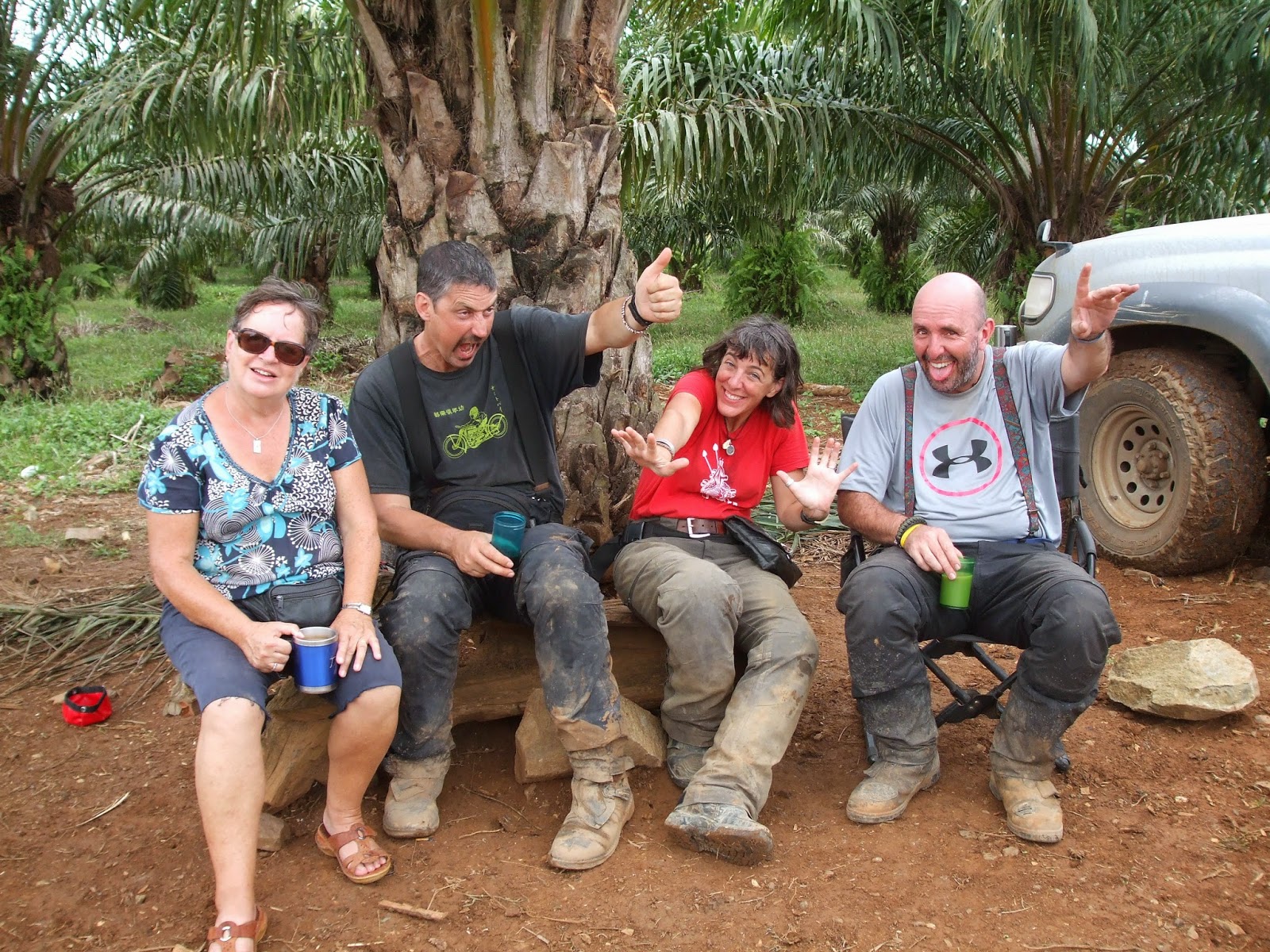 Time for tea on the road from Pearl Lagoon back to El Rama, to see a film of the road to Pearl Laggoon  link to road video click on following link, put together by shannon, using footage from her and my go-pros. 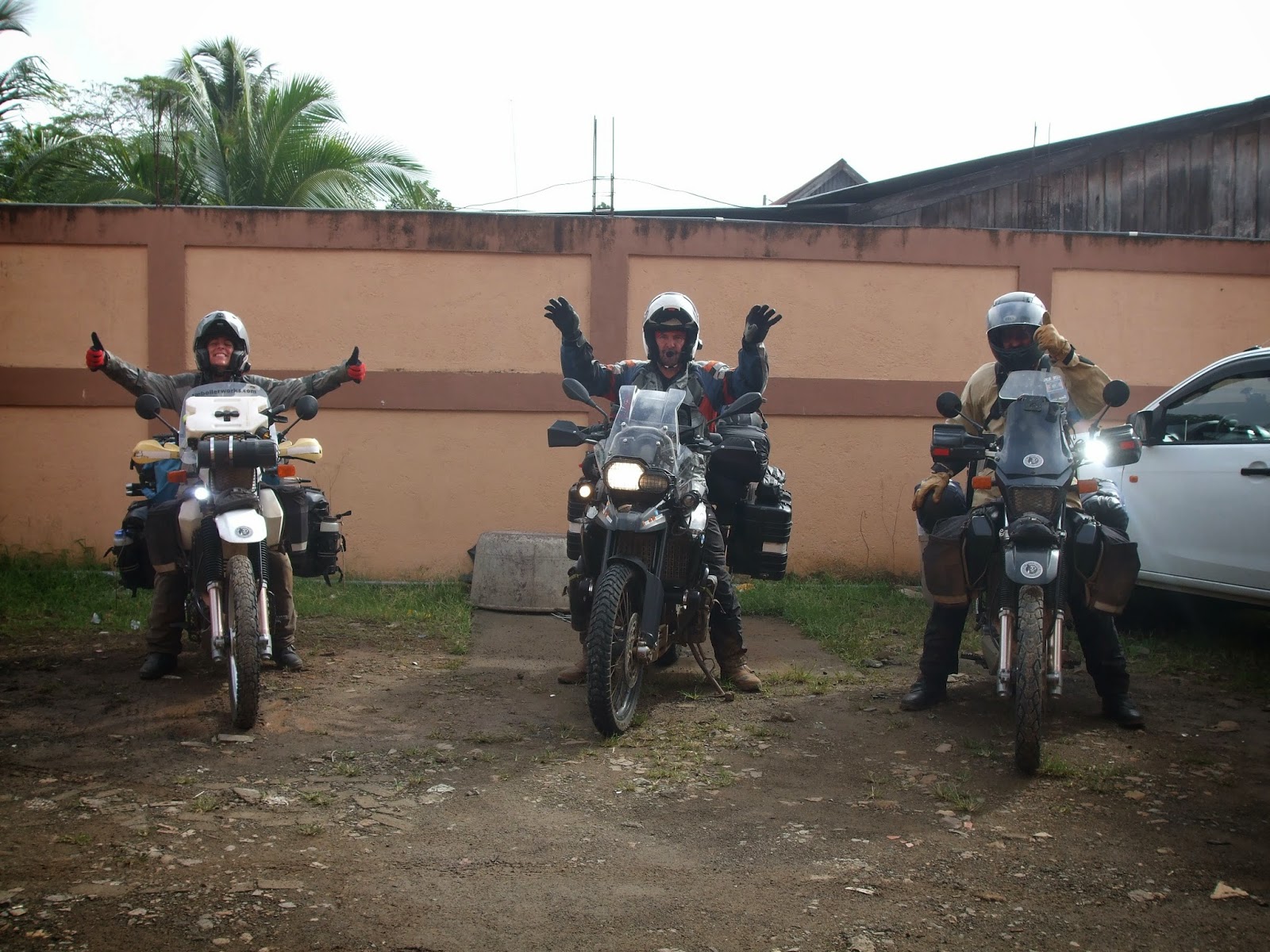 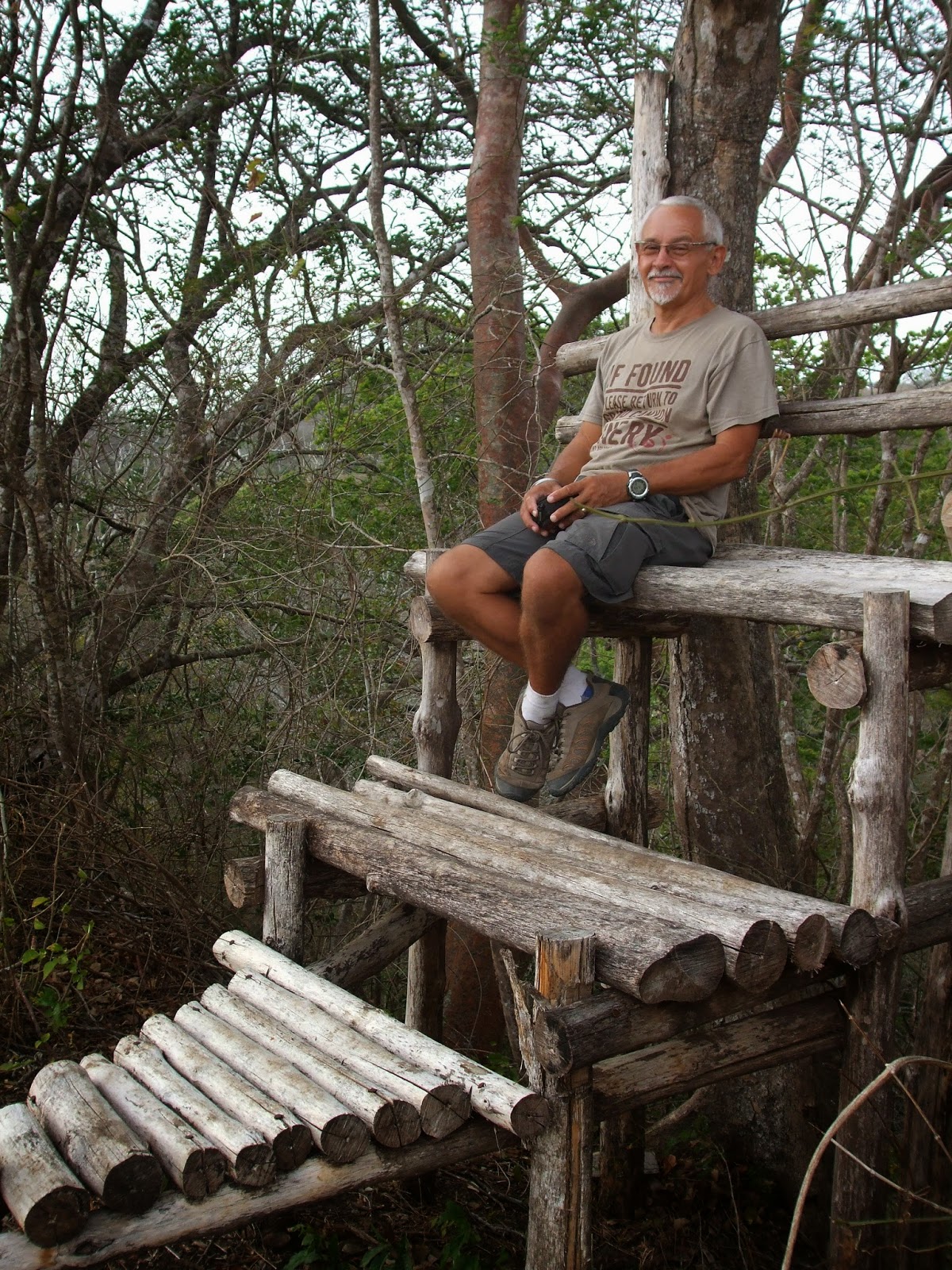 I get the big seat 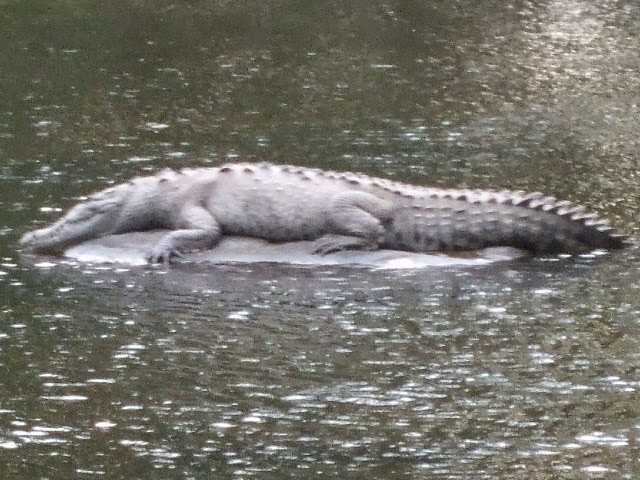 Crockadile on a rock in the river 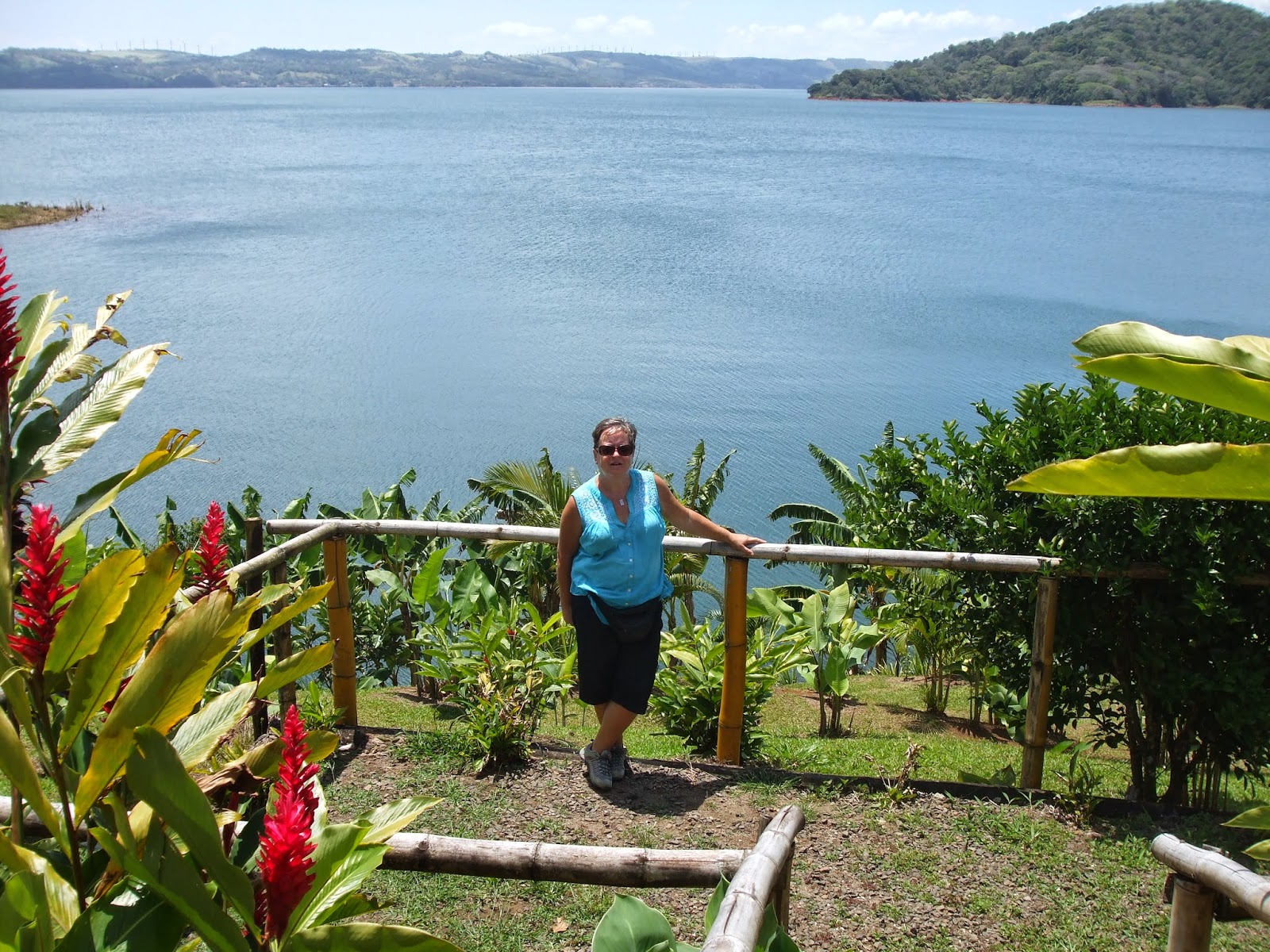 The view from the Restaurant we camped next too 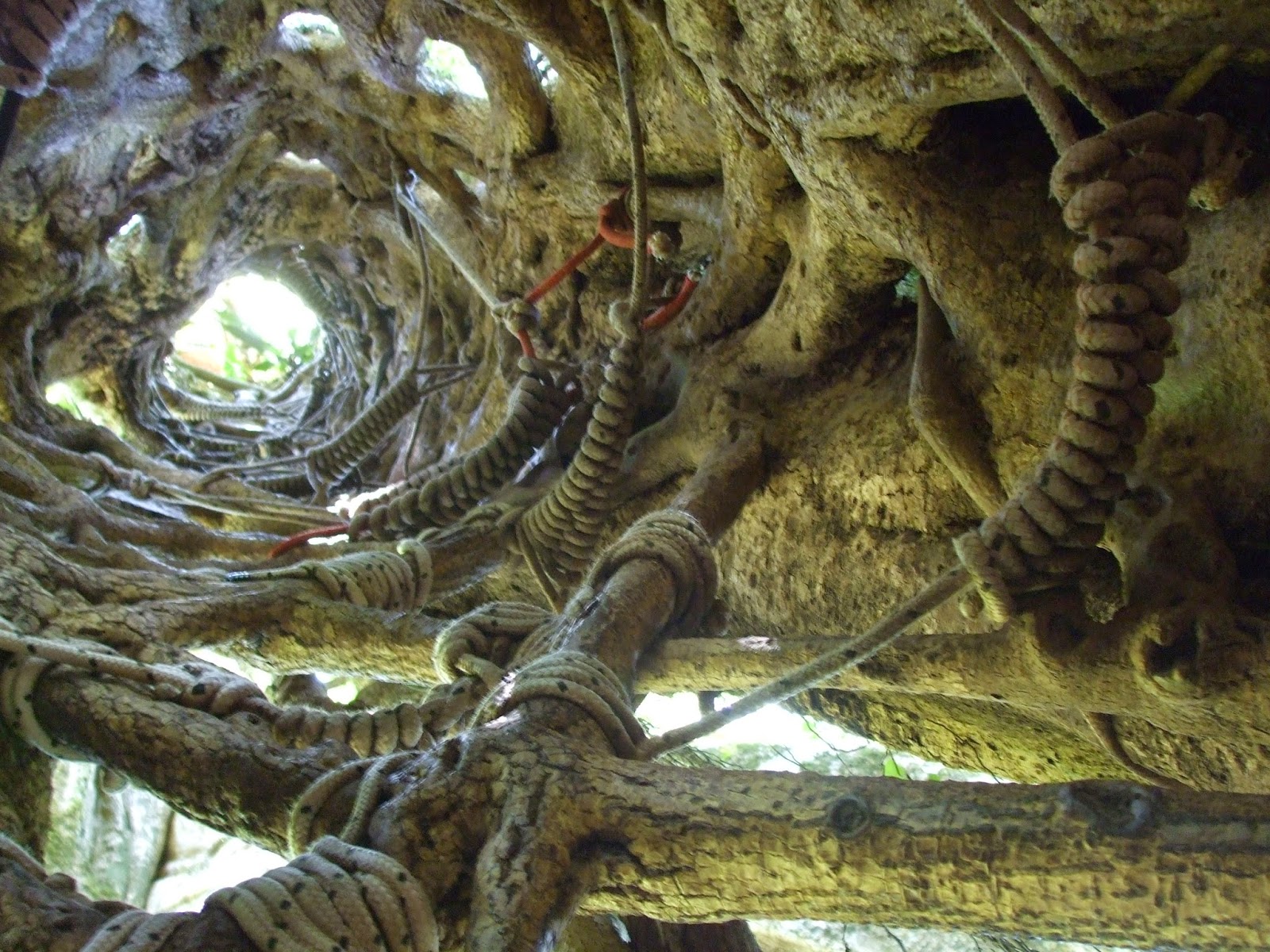 Climbing inside a tree up to one of the hanging bridges. 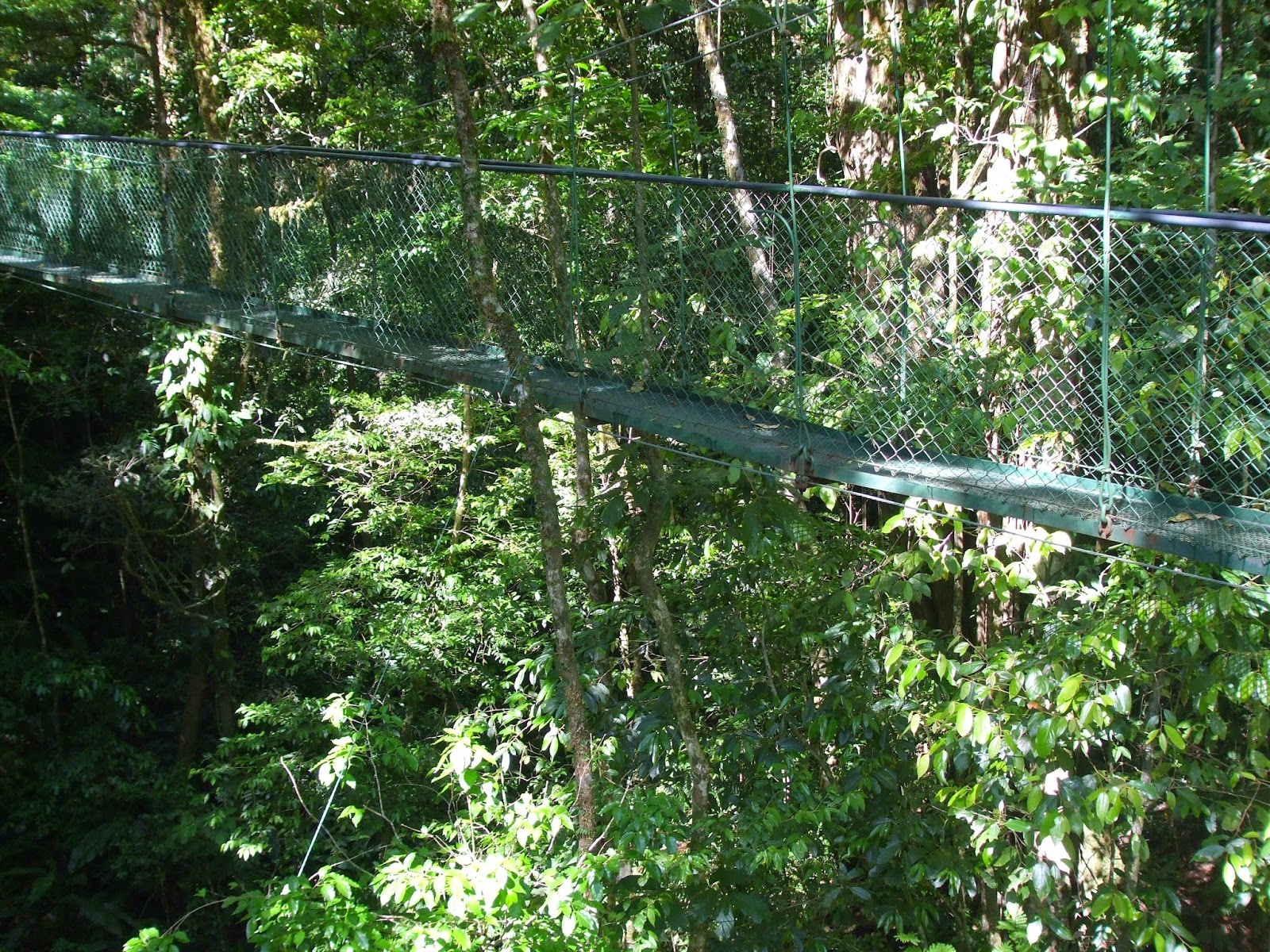 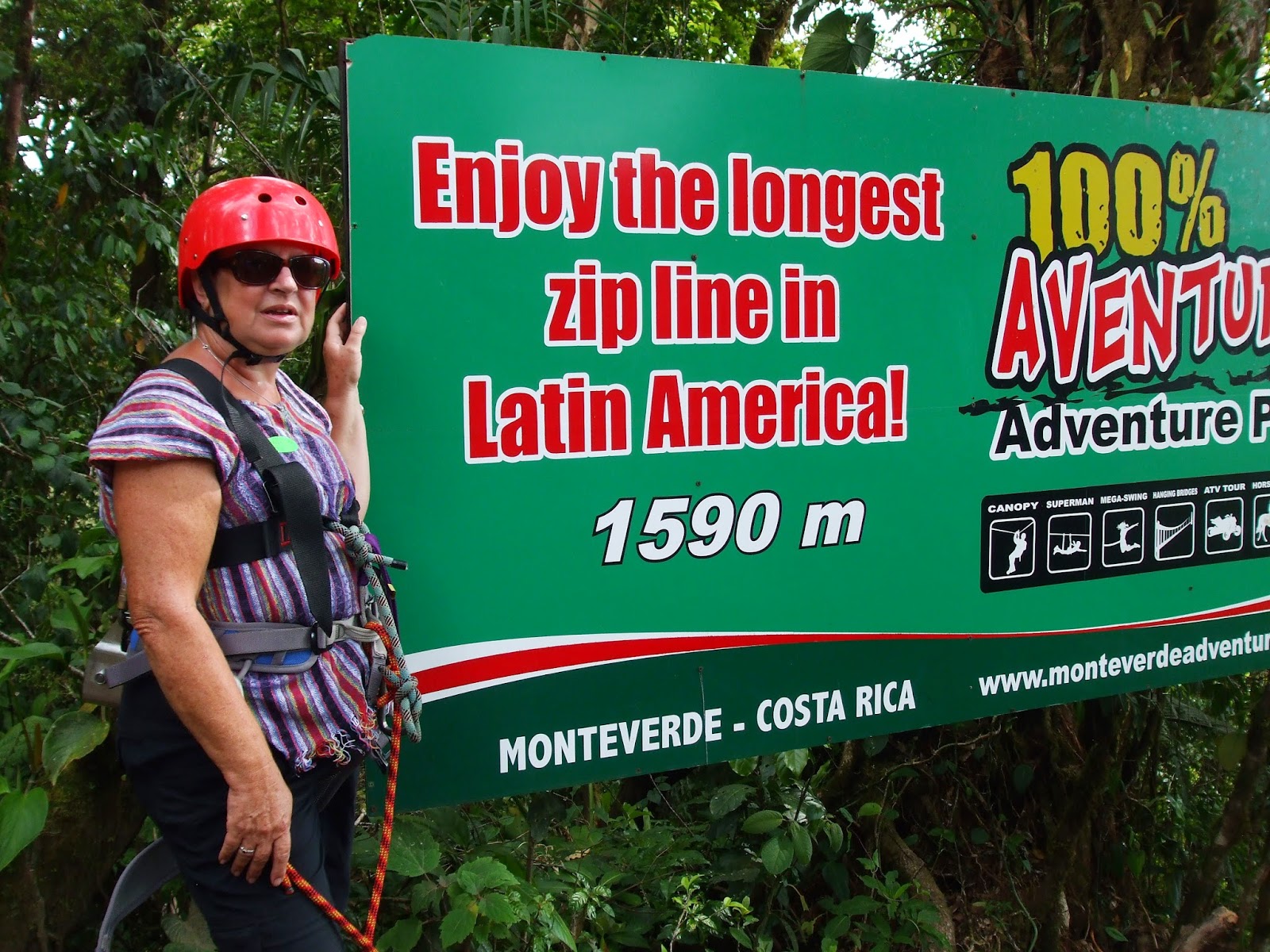 Chris getting ready to do the longest zip line, almost a mile long 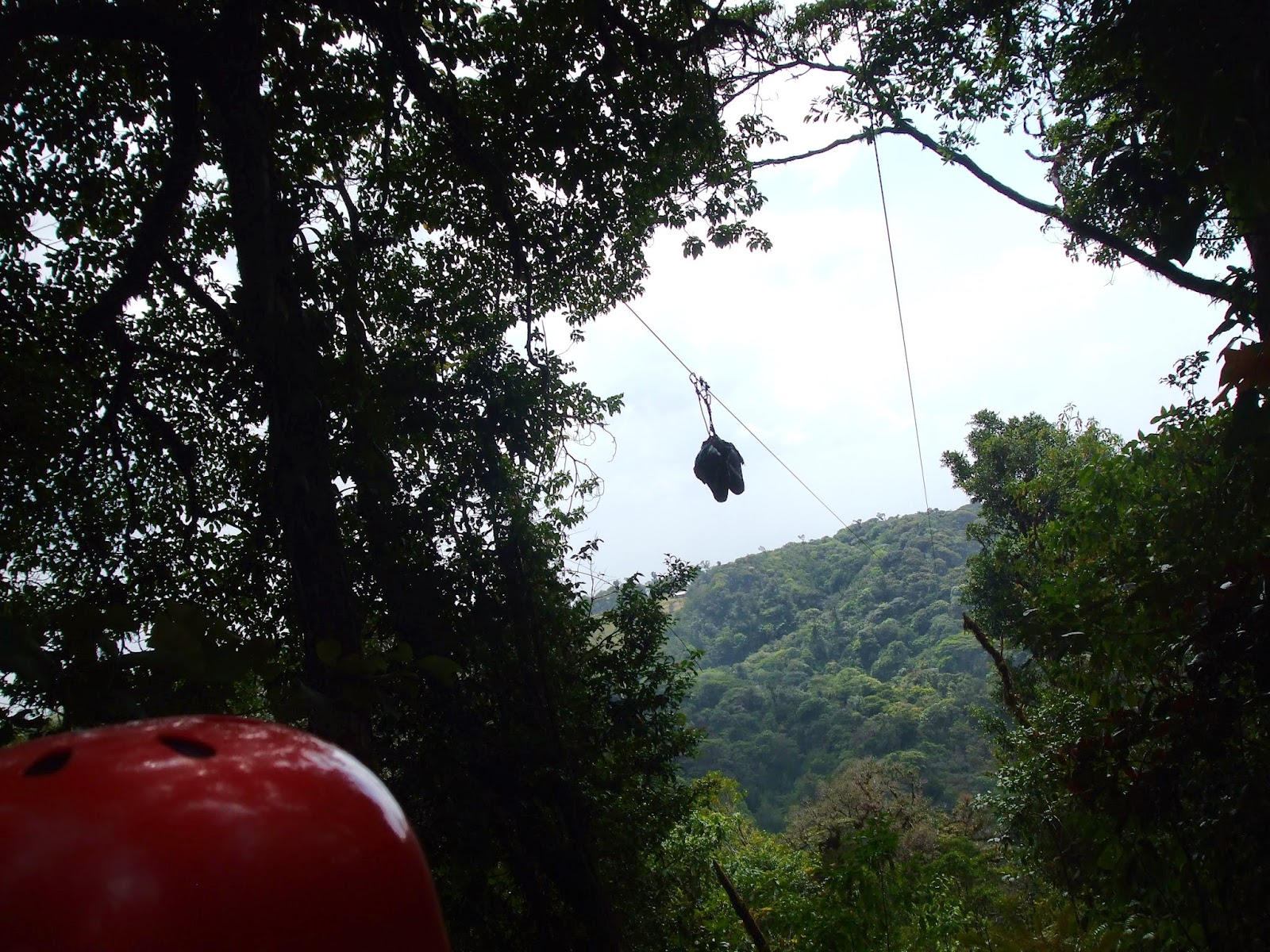 Chris coming in like a bullet after reaching a speed of over 50 MPH. 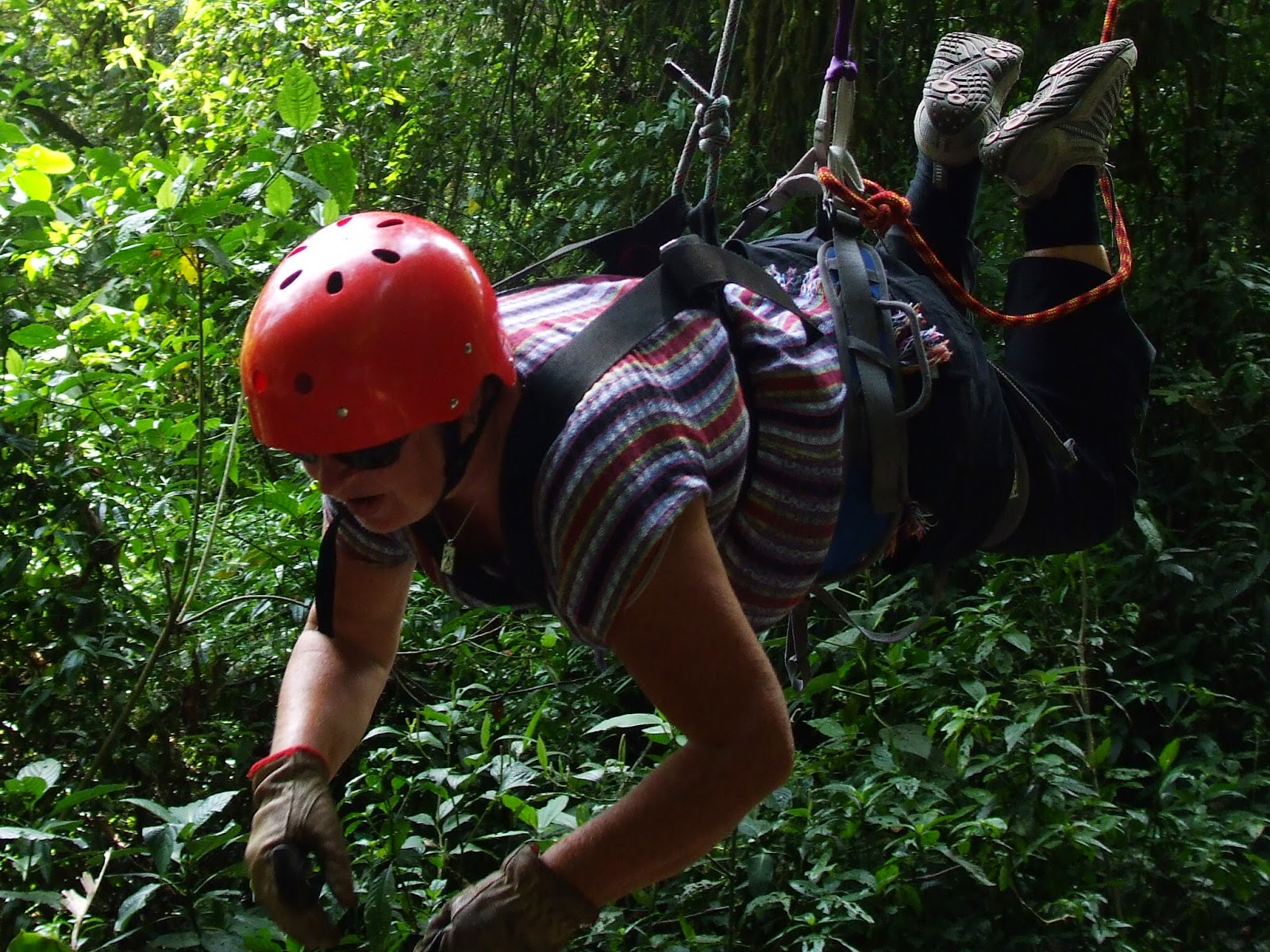 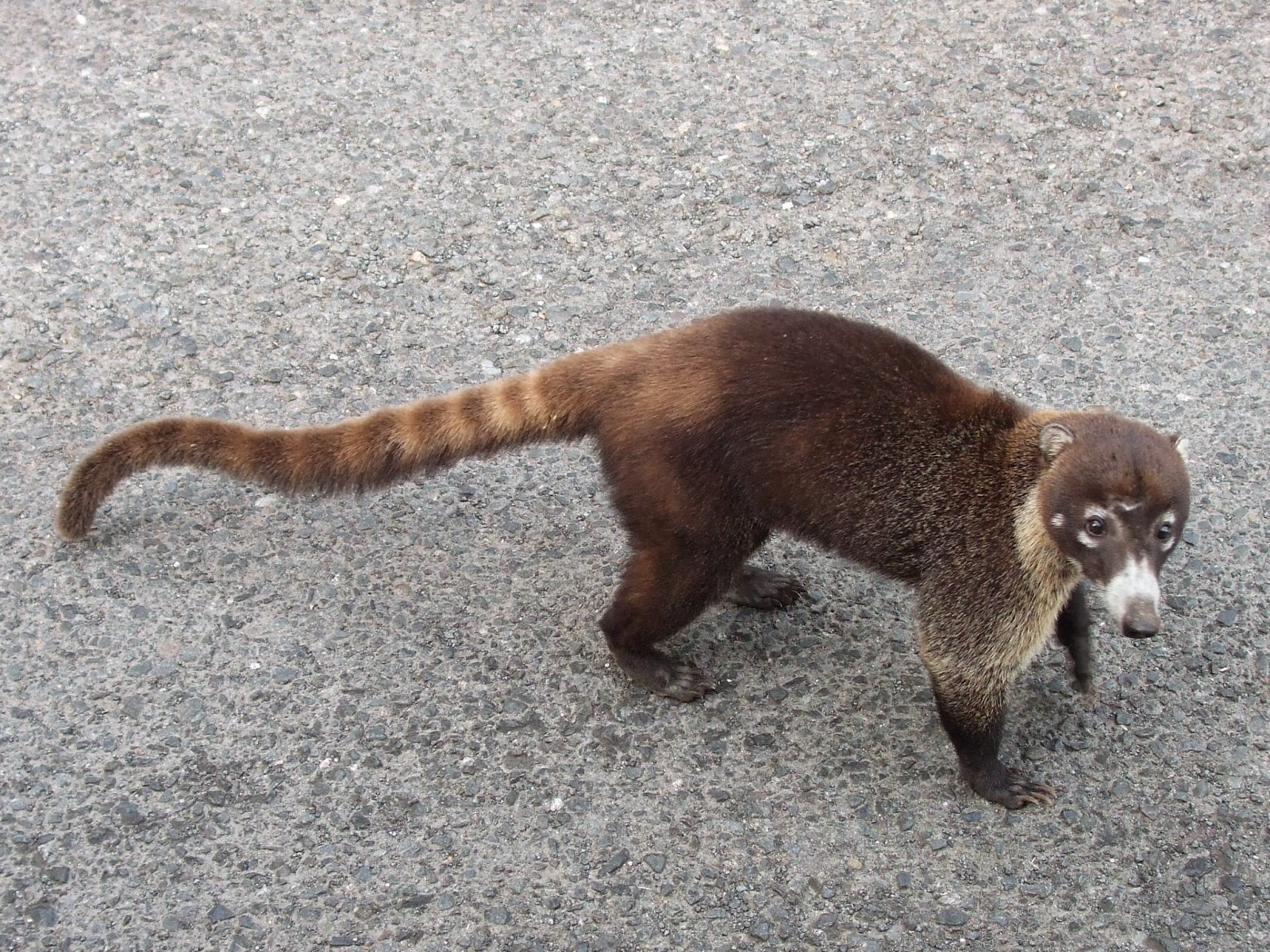 Cant remember the name but of the Racoon familly 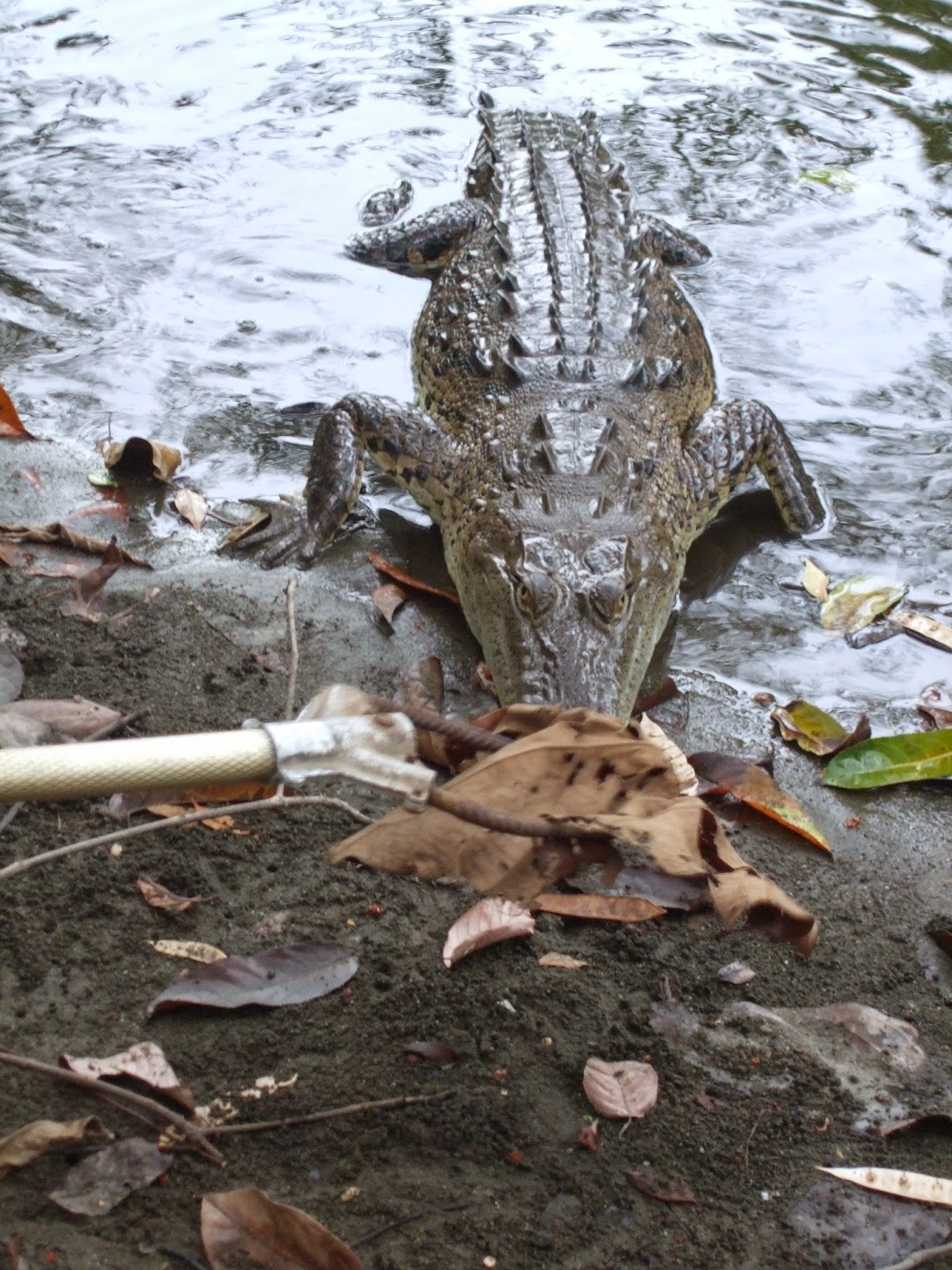 The smaller of the two crocs in the lagoon tricked into attacking a leaf thinking it was meat (the next evening they were fed meat, but too late to get a decent picture. 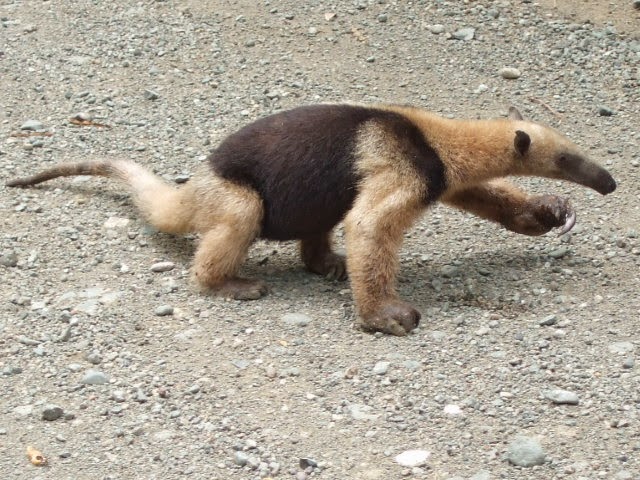 An ant eater sauntering across the road in front of us, not at all bothered about us getting up close to take photos 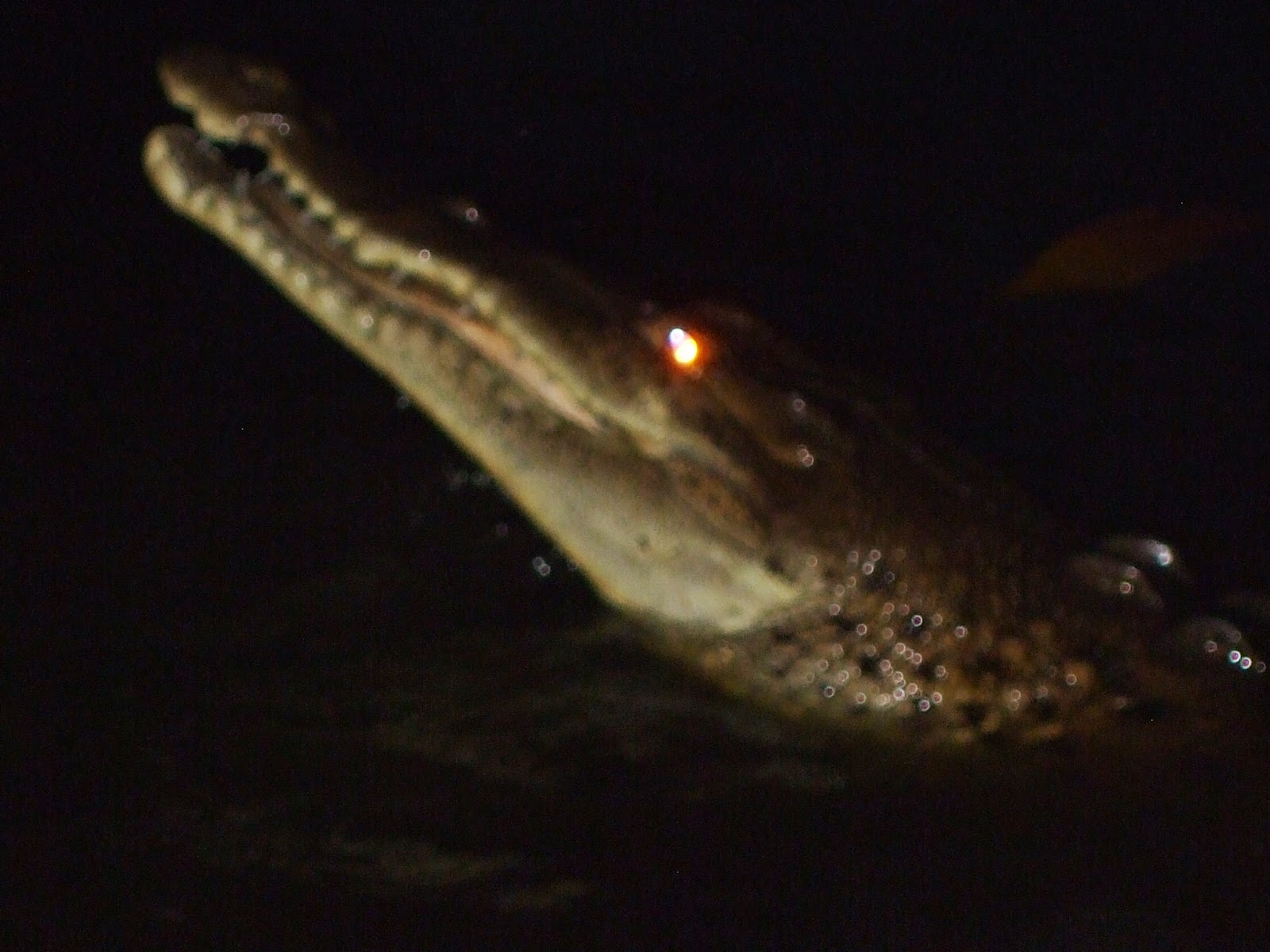 Feeding the crocks at dusk