After 5 days on the beach we were ready to get on the road again and with little to see for the next 500 miles we needed to get some miles under our belt. First night we stopped at a restaurant that someone on IOverlander said was the best meal they'd had in Colombia. Unfortunately it did not live up to the billing, but it was OK and we camped for free behind the restaurant. The next night we ended up driving the last 30 minutes in the dark to reach El Portal, another IOverlander site and woke up the following morning in a beautifully landscaped gardenswith lakes and pools, a real oasis from the madness of the Colombian roads.

Up to now we had no choice but to stay on the main roads with huge lines of traffic behind large slow lorries, with smaller trucks and buses trying to overtake them and cars trying to overtake all of them. Occasionally right hand drive would give us an advantage and mean we could get the drop on the cars ahead in order to get past the slow lorries. After 400 miles we were getting into the foothills of the Andes, the big lorries got slower and the overtaking more frantic, it is amazing how many Colombians can see round corners!

Finally we arrived at Chichamocha Gorge and camped in the car park for Chichamoch Park, with a fabulous view of the gorge . Next day we took the cable car down to the bottom of the gorge and back up the other side, we had lunch in a little Peruvian restaurant and then back on the cable car for a walk round the park, which included a huge memorial to the struggles between the locals and the Spanish, with life size bronze statues of people and animals, including four bullocks pulling a cart.

A short drive from the Gorge we stayed near Barrichara, a small village declared a World Herritage site and walked up an ancient footpath to Guane, an indigenous village.

After this we headed for the Highest Vineyard in the world at 2,600m on smaller roads, which turned out to be a lot smaller than we expected, a single track, unpaved road, first along a lush green valley, up into the clouds at 3,682 metres and down to the Vinyard. The owner of the vineyard told us there is a vinyard in Argentina at 3,200 metres, 'which is owned by Italians and they cheat, they have vines there but it is not possible to grow wine making grapes at that altitude and they bring them up from the valleys below'.

And now we have been at Villa de Layva for 4 days, another World Heritage Site, cobbled streets and the biggest square in Columbia, two nights ago we found a wonderful little Restaurant just off the square, with live piano musc and recorded concerts on 2 strategically placed TV'd, so good we went twice. Not only the best restaurant so far in Colombia but the best restauarnt on the whole trip!There is also lots to see in the area, plus a nice walk direct from the camp site.

We are now 40 days into this leg of the trip, 356 days on the road in the Americas and just over 30,000 miles since leaving New York last June. 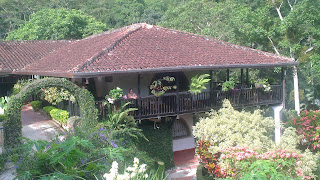 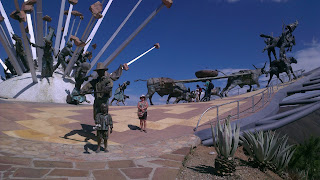