From Vino to Pisco

(The following was written on 23rd April, but the internet was too poor to post and we have not had decent internet since. We are now in San Pedro De Atacarma, but that is for the next post!)

We are now moving North approx ¾ of the way up Chile and well into the desert, where rain is something from the dim distant past. Unfortunately not all blue skies and sunshine though as until the sun pushes off the clouds from the sea it is quite cold (and it is now nearly 1 p.m. ad he sun is know where to be seen yet. Yesterday it was sunny and warm by now and stayed that way until 17.30, when the sun was again pushed out by the clouds  and cold descended, then once the sun goes down (around 19.30) it gets really cold.

We have had quite an adventurous week. After dragging ourselves away from the beach we moved to the mountains to the Elqui Valley. Christain (the Austrian Chef we met in Northern Ecuador) had marked this as somewhere to go, we couldn’t remember why, but when we got here we found it was the centre of Pisco production for Chile and the whole valley was carpeted in pisco plants, often right up the side of the mountain. Many of them covered with 000’s of metres of sandy coloured netting which at first looked like dirty glaciers, but far too hot for that as it was in the 30’. We tried to do a tour but the one we went for was booked up and the following day was census day in Chile and everything closes on census day.

Then back to the coast to follow a 4x4 route suggested by Caro and Victor, from Porto Choros to Huasco. We got to Porto Choros at around 5pm and the only camp site open wanted £25 per night so we decided we would camp wild on a beach up the road a little. We spotted what we thought would be a good spot and headed towards the beach on a gravelled track, but this soon became thick sand and in trying to loop round to come back I buried it. A little gentle coaxing and one rear wheel almost disappeared under the sand, with the axle at a crazy angle and the other wheel almost jammed in the wheel arch. So, for the second time ever, the max trax came out, and this time they were successful (the first time being in Mongolia where they were not!) The max trax were buried in the top box so first everything had to come out to get them out. Then a lot of digging to get them into position let the tyres down to around 18lbs and out she came - for 2 car lengths then sank again. More digging (but this time not so much as I stopped straight away) and off again - for another 2 car lengths. But 3rd time lucky, I managed to get traction and back onto firm ground. I was then a little more careful and we found a nice spot, tucked out of view in a little bay.

The first part of the 4x4 route was very slow, being both twisty and rocky, but then it turned to sand and needed low box for a few miles but a lot more comfortable to drive on and able to get up to 20/25 MPH. Up on top of the cliffs, then down again, finally slithering down a steep sand bank into a small village right on the edge of the water, a bit concerned that if the road back up the other side of the village was the same as the one we came down we might be living here forever! But the road at the other end was well gravelled and 200m later became a brand new road which went all the way to Huasco and then spent another night wild camping on a beach in another little rocky outcrop, again hidden from all.

The new road then continued up the coast and we came off at a place called Baranquilla looking for lunch, which, like many of the villages on the way were virtually deserted. All the houses in the area are like wooden huts on stilts, most quite small, but some 2 storey and we suspect they are either holiday homes or letting propertied and although the weather is good for most of the year Chile has a very fixed holiday time and few people seem to go away outside January and February.
But we drove right through the village to the sea and found a little port where a small fishing boat had just come in and was unloading its fish, so we went to the small kiosk and one of the guys filleted one of the fresh fish for us, and then had lunch at the little restaurant nearby. Whilst there a guy appeared outside mimicking pumping a tyre and pointing at our truck. We managed to explain the the pump was fixed inside the vehicle but we would help after lunch and he gave us a thumbs up and disappeared back up the hill. On the way out of the village he appeared again and we followed him as he trotted off down a side street to a pick-up which looked like it should have been in a scrap yard some years ago, but we pumped up his tyre and he was very grateful, (just like being in Mongolia, but fortunately the do not have mares milk in Chile).


Now we are on another beach, in a camp site this time, and have the bottom room up again as it is too cold to sit outside in the evening – after all – ‘Winter is Coming’. 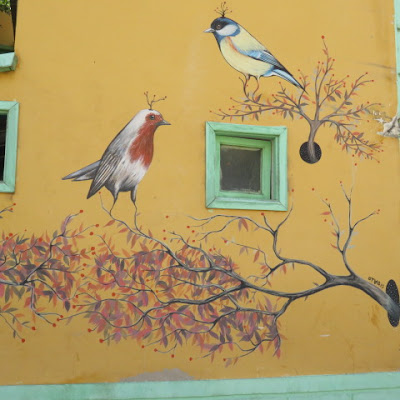