Mongolia - We've made it!

The forecast in the Altai mountains was rain for 4 days, heading towards Omsk, but Omsk was still 30 degrees plus so we staid in Omsk until the rain hit (and overnight went from 34 to 17, heavy cloud and wind) and headed on. We manged to duck under the rain the first day and only pitched in the rain on the second night. Next morning was the first time we have had to pack up wet (but the waterproof mattres cover over the doubled up matress worked a treat).

We stayed in accomodation in Gorno Altaisk in order to register (and ended up staying 2 nights) and by the time we were ready to leave the clouds cleared, sun shone and back up to 29 for our 300 mile drive through the mountains to Mongolia.

En route we passed a couple of brit bikes, stopped for tea down the road and they joined us. They had basically come the way we are going back so was interesting to swap stories. 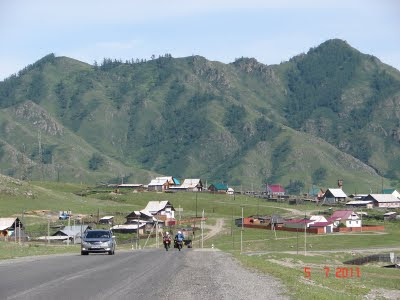 That night we found our first Russian camp site in 4,000 miles 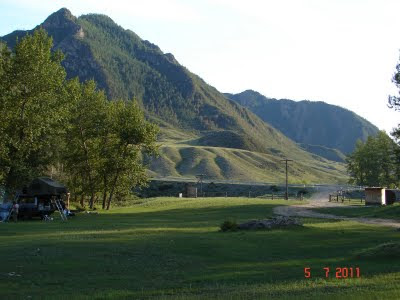 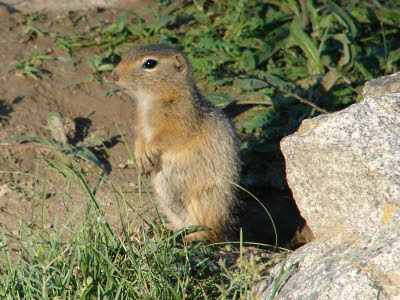 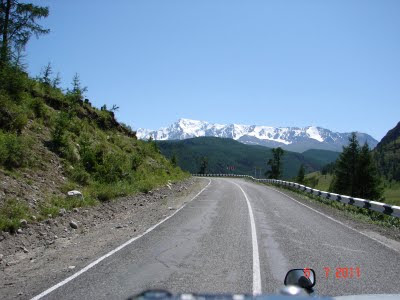 As we travel through the heart of the Altai we saw snow capped mountains and reach a height of over 2,400m before arriving at the border.

After lots of stories about having to fax permit applications 10 days in advance to enter the border regions (of Mongolia and China) which are apparantly still controlled by the FSB (formerly KGB) we arrived with some trepidation, even more when we saw a sign (in English) saying permit and doccument holders only. A mile later we approached a check point! They looked at our passports and waved us on! Apparantly the permit was phased out last year!

As it was getting late (and the borders close at 6) we did intend to stop before we hit the border, but the Russian side was 13 miles before we expected it, but there was no qucue so we went for it.

10 minutes later we were through. Searching consisted of opening one door, the guard picking up the russian lonely planet, beaming and waving us on!

13 miles later we came to the Mongolian side where we caught up with two couples in 60 year old MGTC's, who were just leaving and had taken them 4 hopurs to get through both sides. They speeded us up through imigration as they were closing, but customs just put all our doccument in a cupboard and went home, leaving us in the compound over night, with a Kashak familly of 5, a Mongolian wagon with 8 peole in it and a truck.

The gate was left open so we could walk to the 'Hotel' and 'Restaurant' just outside the gates. The Restaurant only had 2 tables and the 'Hotel' was a 3m square room with 4 bunks and 3 small beds. We had the meatballs (which were actually very tasty) and then went back and slept in the roof tent.

Next morning the only problem was some tiny biting flies, which were actually biting me (the mossies don't bother me much), and these also liked the sun, where mozzies generally stick to the shade). At 9.00am customs opened, took a brief look in the back of the vehicle, gave us our papers back and off we went. In fact the process was very quick and we had not intended to cross that night anyway so arriving late worked very well.

The road change is dramatic, good tarmac right up to the border then dirt track beyond, with often a choice of tracks to take. After about 10 miles we came to a really steep, loose hill which required low box and we could see the wife of the Kashak familly struggling up the hill with a bag, then one of the boys with a box of apples and the other boy with 2 large bags, they had unloaded the car to get it up the hill.

We stopped, Chris jumped out, loaded all the gear in the Cruiser and Chris walked up with them. At the top we had reached 2,600m, but this was as high as it gets (for a while anyway) so after their car had cooled down they were good to go.

At the next village we met a French couple that had cycled from Ulanbataar and were basically heading for our return route - they were intrepid!

The first big town is Olgii, where we found some Gers with internet access and here we are. 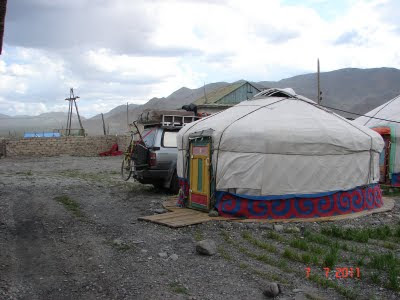 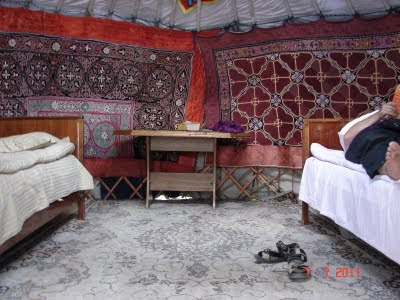 The Story of the Winch

After failing in Romania and having a temporary repair we checked it again a few days later and it had failed again, but whatever happened had activated it and wound it tight! We tried a couple of places in Russia with no luck, but saw very few 4x4's with winches until we approached the Altai mountains.

4,500 miles later, with 300 miles of Russia left, we rounded a corner on the way back to our accomodation in Gorno and there was a cruiser with a winch parked on the corner and the driver out chatting to another driver. I explained the problem, he opened the back of his truck, which was empty except for a complete (used) winch in a box, which he said I could have 'no money' and said he would meet me at 10.00 next morning and take me to a mechanic. Problem turned out that the cut off switch had welded itself together and caused the failure, so they bi passed the switch, fitted the solonoid from the spare winch and everything worked! They then disconnected it from the battery for safety and all I have to do is bolt it back on to use it!

Turns out the guy that took us there parents owned a 'Hotel' which was about 25 chelets in the mountains, which he insisted we stay the night and refused to take anything, even for the solonoid!

Our experience in Russia was very different from what we expected, relaxed atmosphere (including the police) we were stopped 5 times in all, 3 times to check doccuments and twice just to wave us on, each time with a smile and a wave. The people are incredibly friendly and helpfull. It is really only the landscape which is pretty boring, most of it just flat, grass, trees and mosquitos, but the mountains are wonderfull and we intend to spend longer in the Altai on the way back.