Into the Mad House

We have been to some pretty chaotic places before, but nothing really prepares you for the culture shock of  passing from San Diego into Tijuana. The crossing itself was easy, in fact too easy. After a cursory search of the vehicle they waved us through and at that point we could have gone! I asked one of the guards about a stamp for the passport and they waved us over to an office. That was done in minutes and we asked about the car and they said it was done on the other side. We set off and after a little while we were approaching a toll booth on the motorway, so we did a u turn between some bollards (probably illegal) and stopped at a police station on the other side too inquire about registering the vehicle. After all we had heard about the Federales, we must have met the nicest one in Mexico, he made 3 or 4 phone calls and drew us a map of where we needed to go.


Turns out that you do not need papers for the vehicle unless you are going into mainland Mexico ( we are going down a peninsular called Baja California and crossing by ferry to the mainland at the bottom) and the border we went through did not have the appropriate office to do so. the guard that told us to go to the other side meant the crossing on the other side of Tijuana! But even then the office was a little way from the other border.

We also needed car insurance for Mexico, had been told we could buy it at the border, but again we must have gone through the wrong border. Whilst wandering through Tijuana we saw an AXA sign so stopped for insurance, whilst inside I heard the cruiser horn blow and went out to find that someone had creased the whole side of her car against the front bumper whilst trying to park. Turns out she was the niece of the lady I was buying insurance off!!!! We could hardly see the mark on our bumper, but the damage to her car was immense!

Now insured we set off again in search of this illusive office and with the help of the Federales map and my GPS we found it. But because the cruiser is so old the VIN number did not come up on their computer and they had to contact Mexico, which is 2 hours ahead and was closed. Apparently we could have done it at the point where we take the ferry to mainland Mexico, but as it was already dark we decided to find a Hotel and come back in the morning.

We had an excellent room once the hotel engineer had got the water running and changed the batteries in the TV remote (we haven't seen a telly for weeks) and went out for a meal.

Next day we retraced our steps (courtesy of the GPS), registered the car and set off for the motorway almost 24 hours after arriving.

Tijuana is absolutely massive and a complete shambles, with cars and people everywhere and when you get out of Tijuana the roads are merely a suggestion, in many places there is a dirt strip as big as the road on either side, with stalls and shops at the far sides, with cars driving in both directions on each side and diving on and off the road without warning and in the main take absolutely no notice of speed limits or lines, single or double. A few weeks ago we thought we were on the set of mad Max, now we appear to be in it!

Only pictures I managed to take were these from our camp site on the beach, the rest of the time my hands were shaking too much to take any, not really, after driving around Tijuana a few times I was ready for anything! 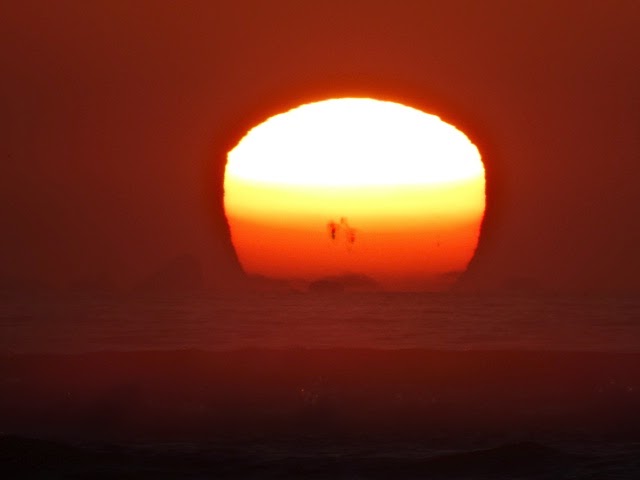