After a very cold night we all decided that the quickest route back to the coast was in order so we decided to go via the toll road, but as it was somewhat further and still took us 3 days to to get there. Both nights we headed for a lake and found camp sites at both (though the first was actually closed so did not cost us anything). The second was in a beautiful setting on the banks of a river leading into a lake. A few locals were there for the day and one large group were singing local songs to a guitar, a good setting for a couple of beers before the sun set. At this point we thought it would take another 2 days to get to the coast, but a superb new road with some fantastic bridges and tunnels meant we could make it in a day.

After a few days of hard driving we spent 4 days in Mazatlan, during which I spent birthday 63 on the beach. We also finally managed to replace the two tyres we tried to replace in San Diego, they still had to order the tyres, but this time they only took 40 minutes.

After this we moved slowly down the coast, spending one night among the palm trees on an empty camp site, one at The Little Rig RV site on a beach and 2 at the Boca de Iguanas. The latter was full of Mexicans in tents as this was a holiday weekend and we got lots of advice as to where was good to go (and where to avoid). A walk down the beach took us to a small 6 room Boutique Hotel and as we arrived for a beer so did the chef, returning from Toronto (-22) for the winter. He said his specialty was Sri Lankan curry so we decided to stay another night. The following day we walked down for lunch and discussed the curry with chef and after an afternoon in the sea (yes, even me!) the curry was superb. The Mexican owners also told us the story of how the Hotel came to be. From a large wealthy family in Guadalajara they fell on hard times and decided to make the family's seaside home a small Bouquet Hotel, it was finished 2 years ago and now have a thriving business.

As we were stopped I decided to check the front breaks and just as well as one of the pads was almost to the metal. Checking everything out whilst it was jacked up I found some play in one of the track rod ends.

Next day we headed for the nearest Toyota garage and found that unlike USA and Canada (where they only have petrol Land Cruisers) in Mexico they don't have Land Cruisers at all! They suggested we go to the main dealer at Gudalajara, which was just off our intended route so off we set.

As we wouldn't make Gudalajara in time we headed for Ajijic (Ahihic) on Lake Chapala (our intended stop anyway) about an hour south of Guad. We arrived in the dark, could not find a camp site, spoke to the local police who suggested there was an area by the peer where we would be OK. We stopped for a beer at a restaurant by the peer, they said it was fine to camp out in front of them (on the water front), so we stayed for dinner and camped outside.

The play in the track rod end was increasing, I was not happy about driving further and so contacted Specter Off Road in LA via Skype (we had met 2 of their guys on Harley's in Death Valley and visited them in LA to buy spare filters and break pads). They had single track rod ends or sets, so I ordered a set and according to the tracking info should arrive tomorrow and I have a recommended mechanic ready to fit when they arrive.

In the meantime, the day after we arrived a local 10 day festival started so the place is very lively. Each Day there are fireworks at 6 am, followed by church bells and the inevitable barking dogs. There are bands (of varying abilities) roving the streets at all times of day and night and on the first day there was a parade that ended on our corner and the band kept playing whilst the horses danced. We have met loads of people, made a few friends done a bit of cycling and had a good rest (still camped outside the restaurant) We have also listened to some superb music, including a Portuguese Fado singer in a bar down the road and a local string quartet practicing in the back of the restaurant (we had planned to eat in a different restaurant, but they were so good we ate there again). 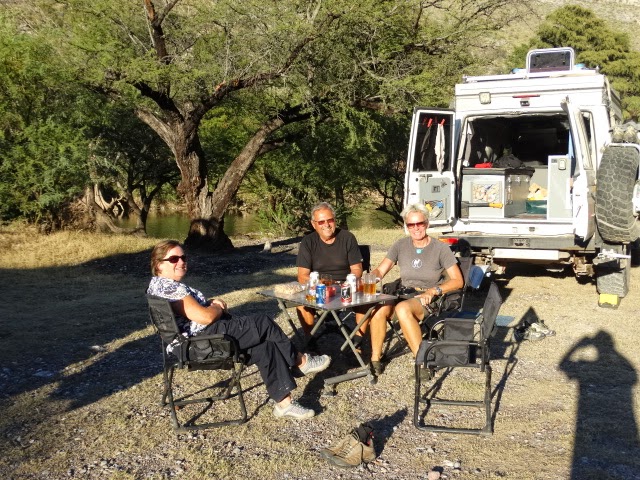 Camped by the river. 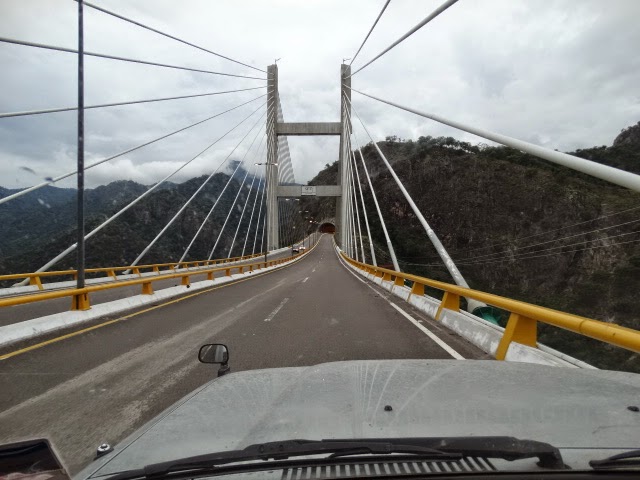 Fabulous new toll road back to the coast 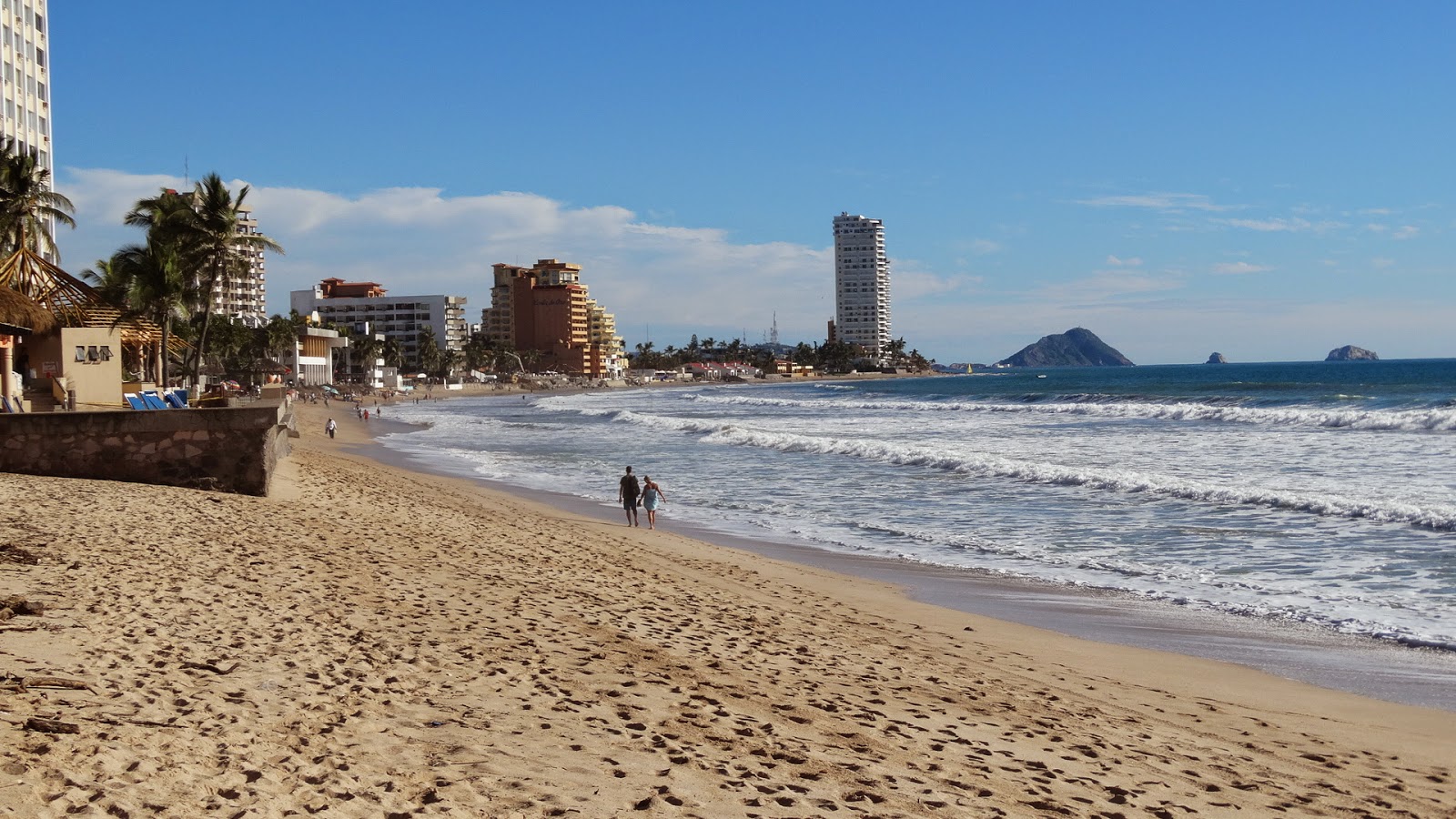 The beach at Mazatlan 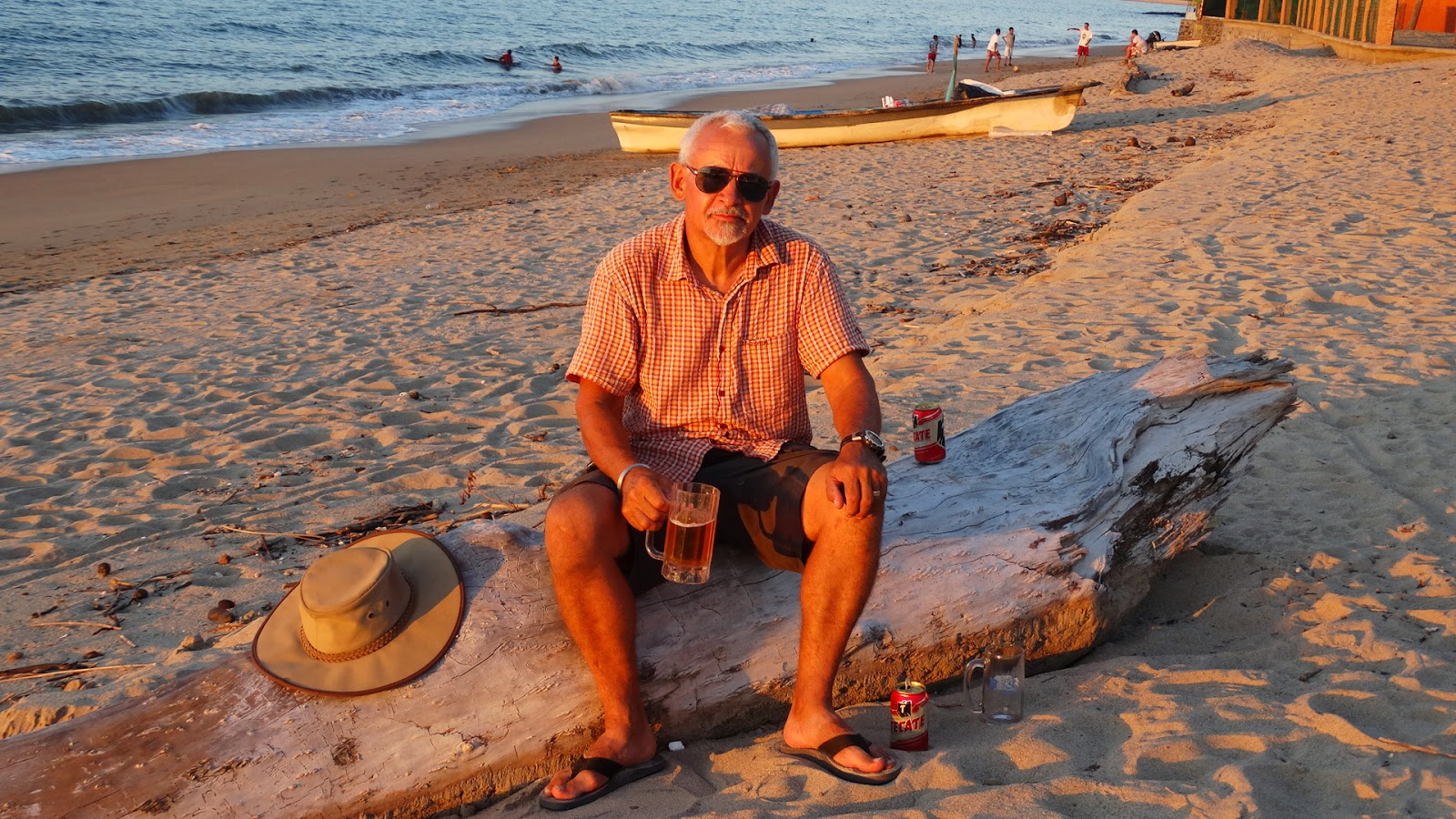 A beer in the sun at The Little Rig RV park 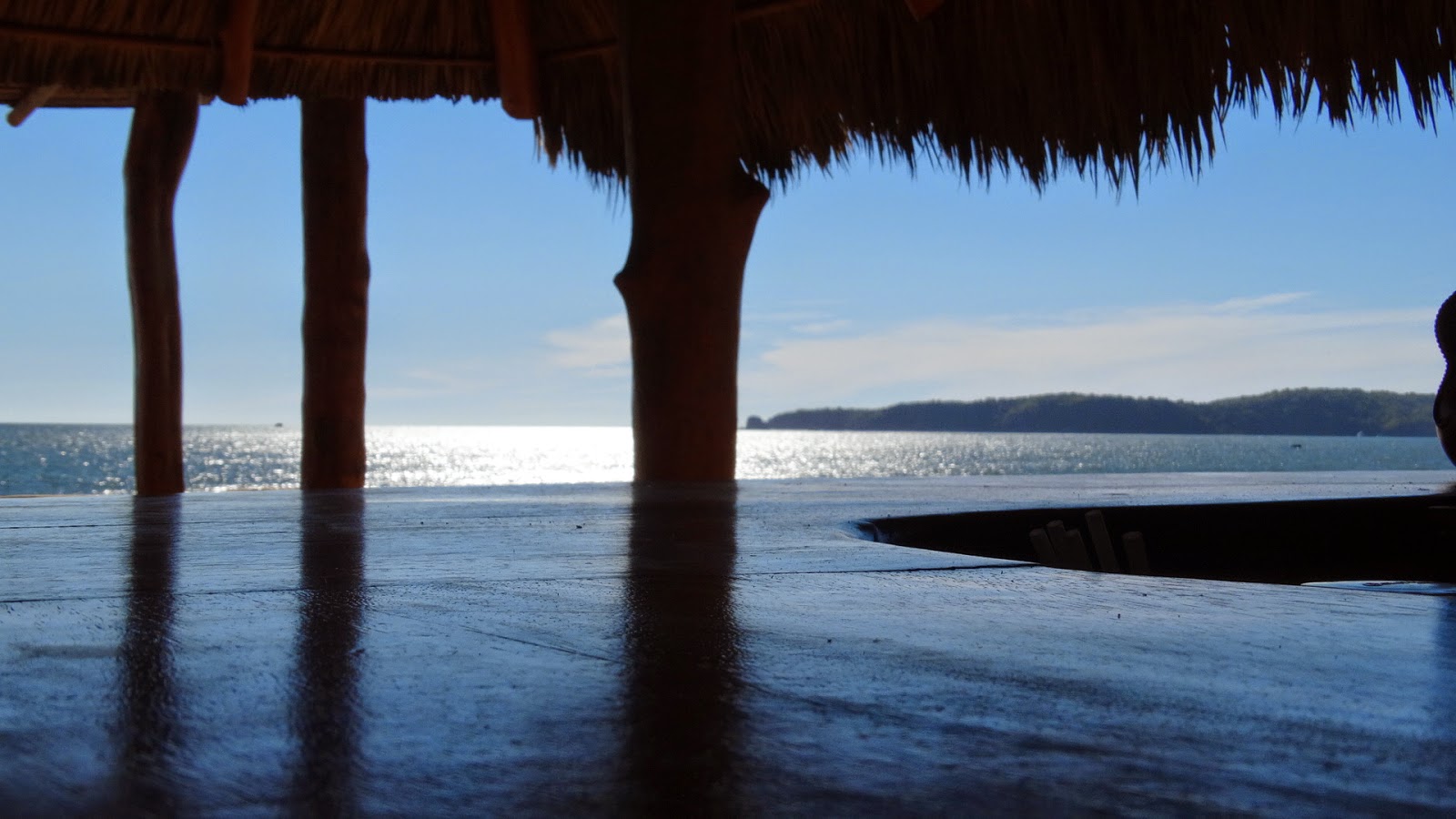 The view from the bar at the Boca de Iguana, having a drink before our Sri Lankan Curry 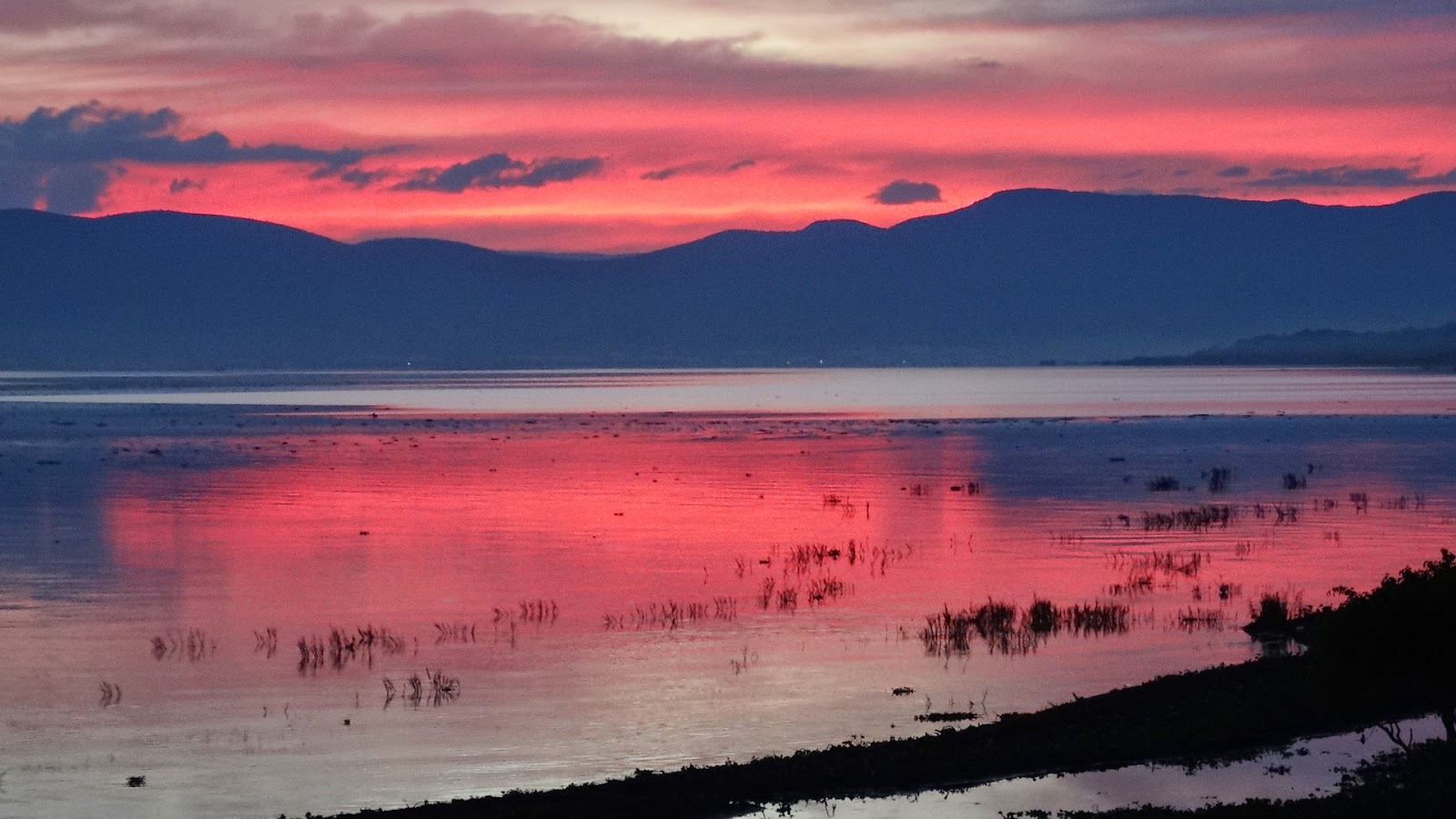 Sunset on the Lake Chapala 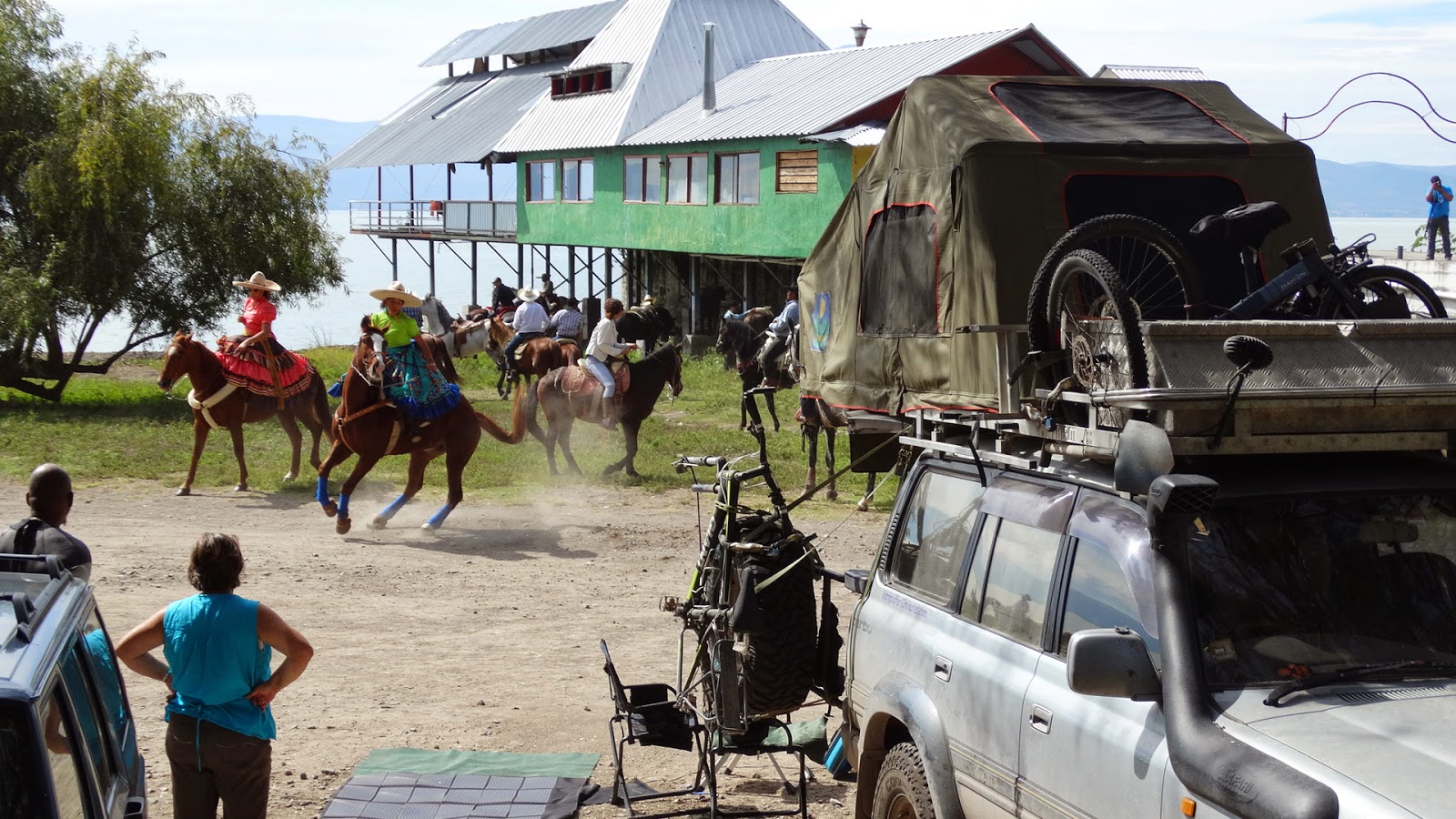 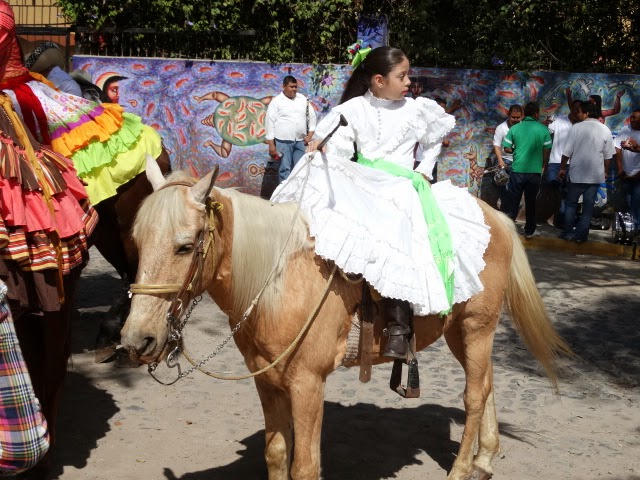 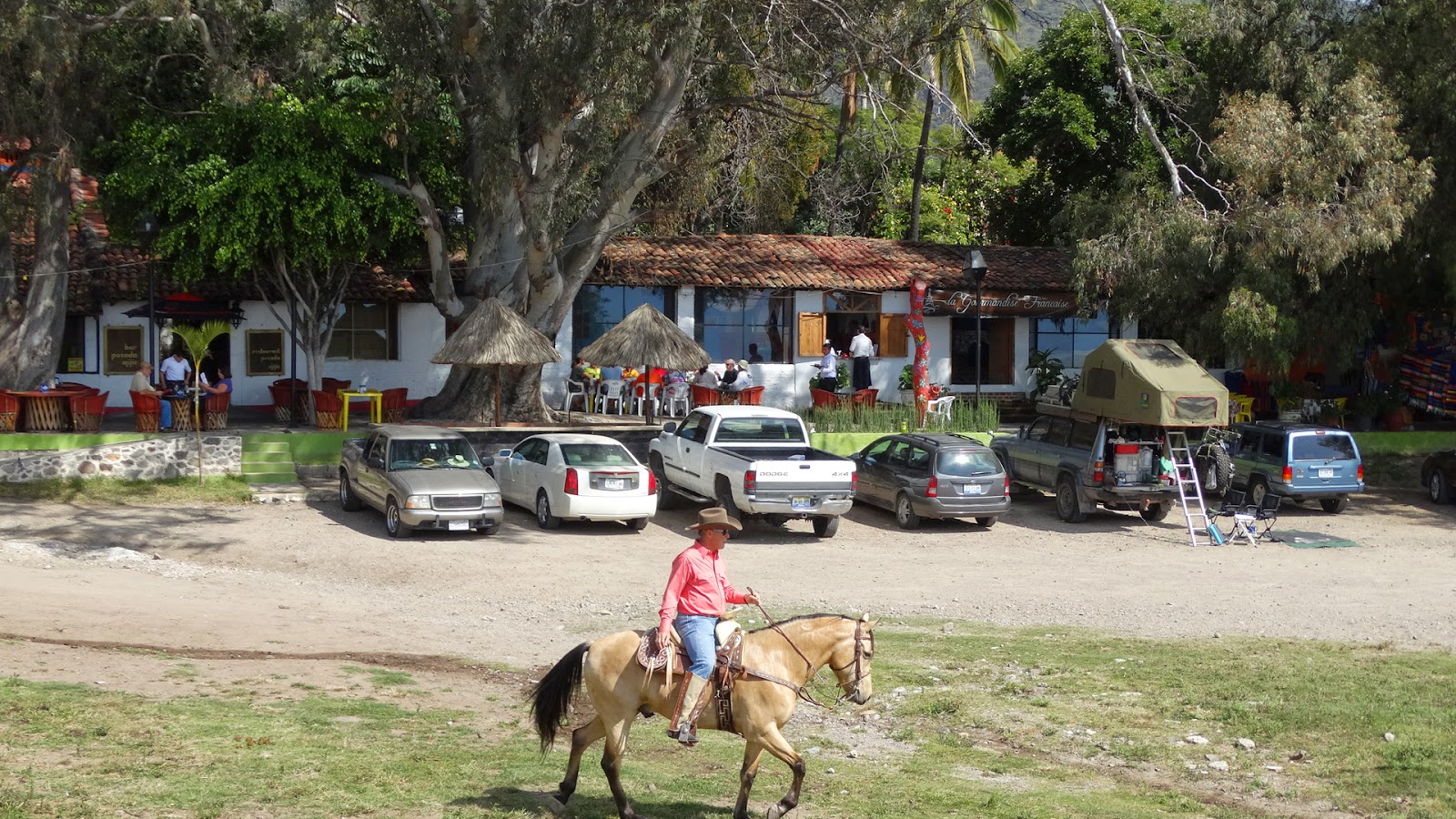 Camped outside the restaurant 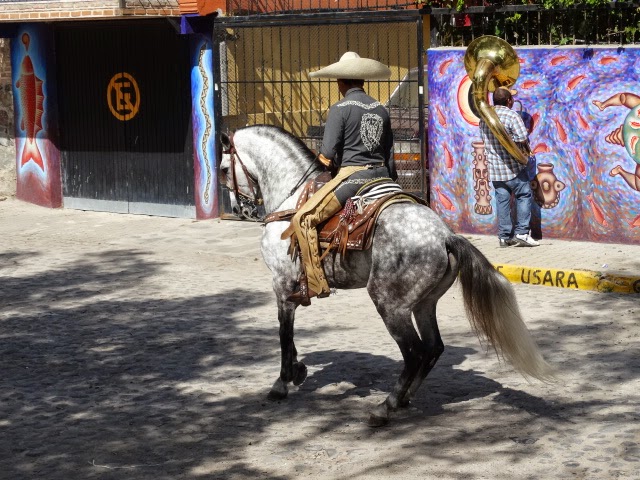 Horse dancing in the street (the Tuba player is using the wall as an acoustic aid, the rest of the band is just out of shot) 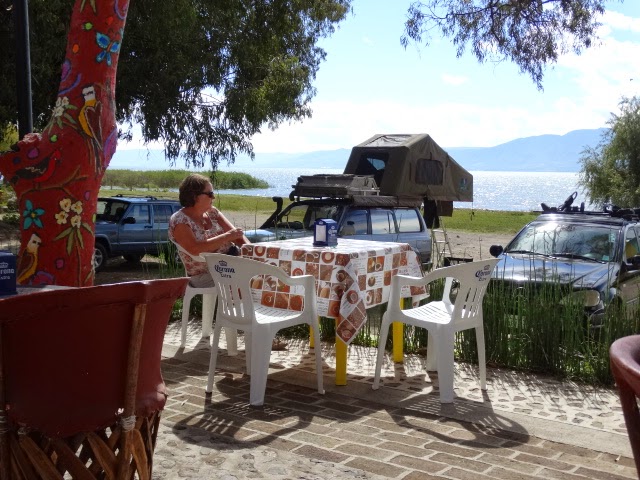 Our dining room for the duration of our stay, there was a large choice of good food at a very reasonable price 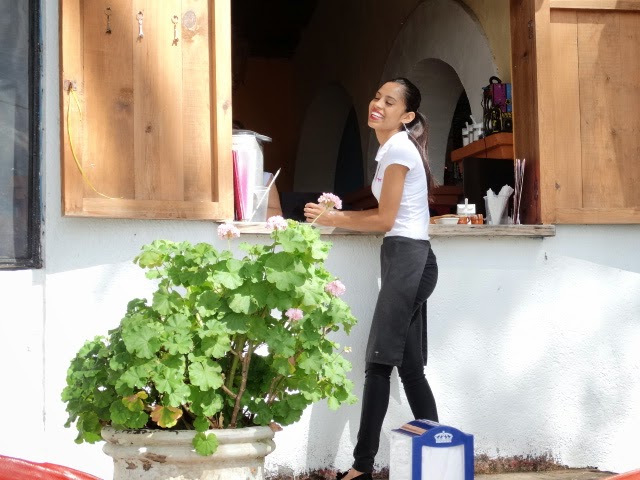 Allondra, our waitress, very pretty, very attentive and very shy. Joseph, the head water is American and we asked him if she speaks any English. He said she was so shy she hardly spoke Spanish 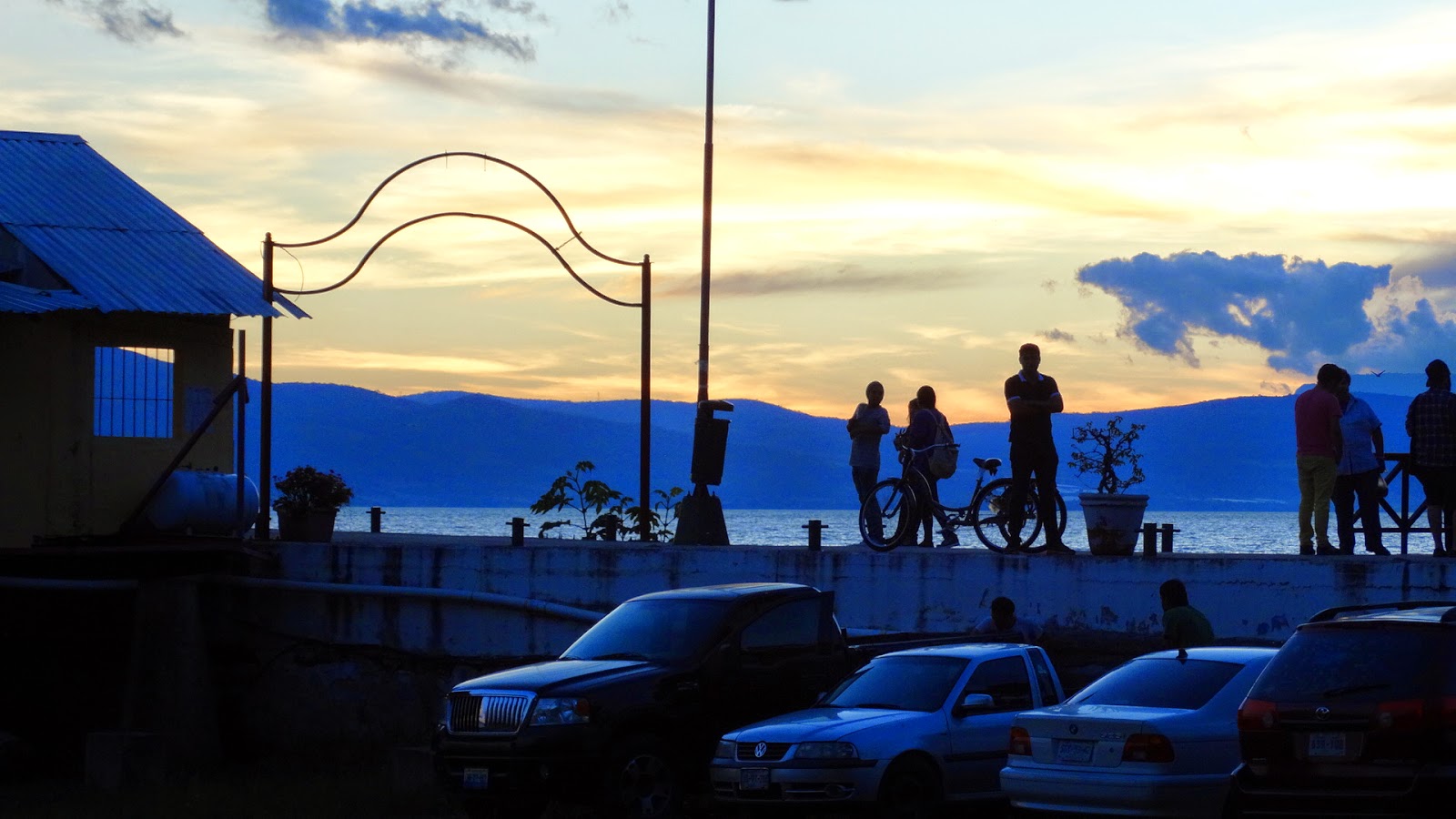 The Peer just after the sun has gone. 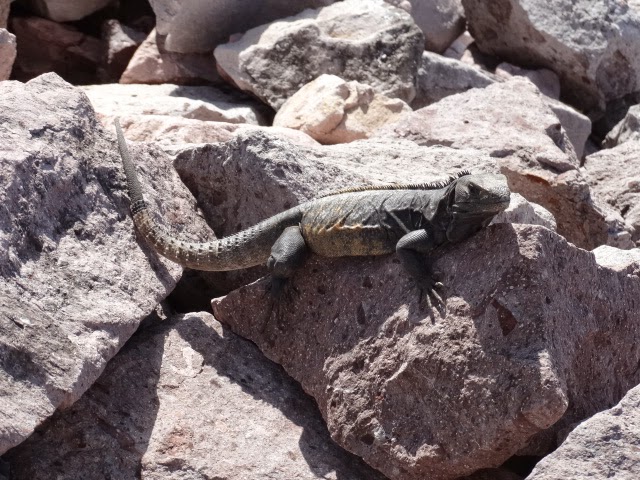 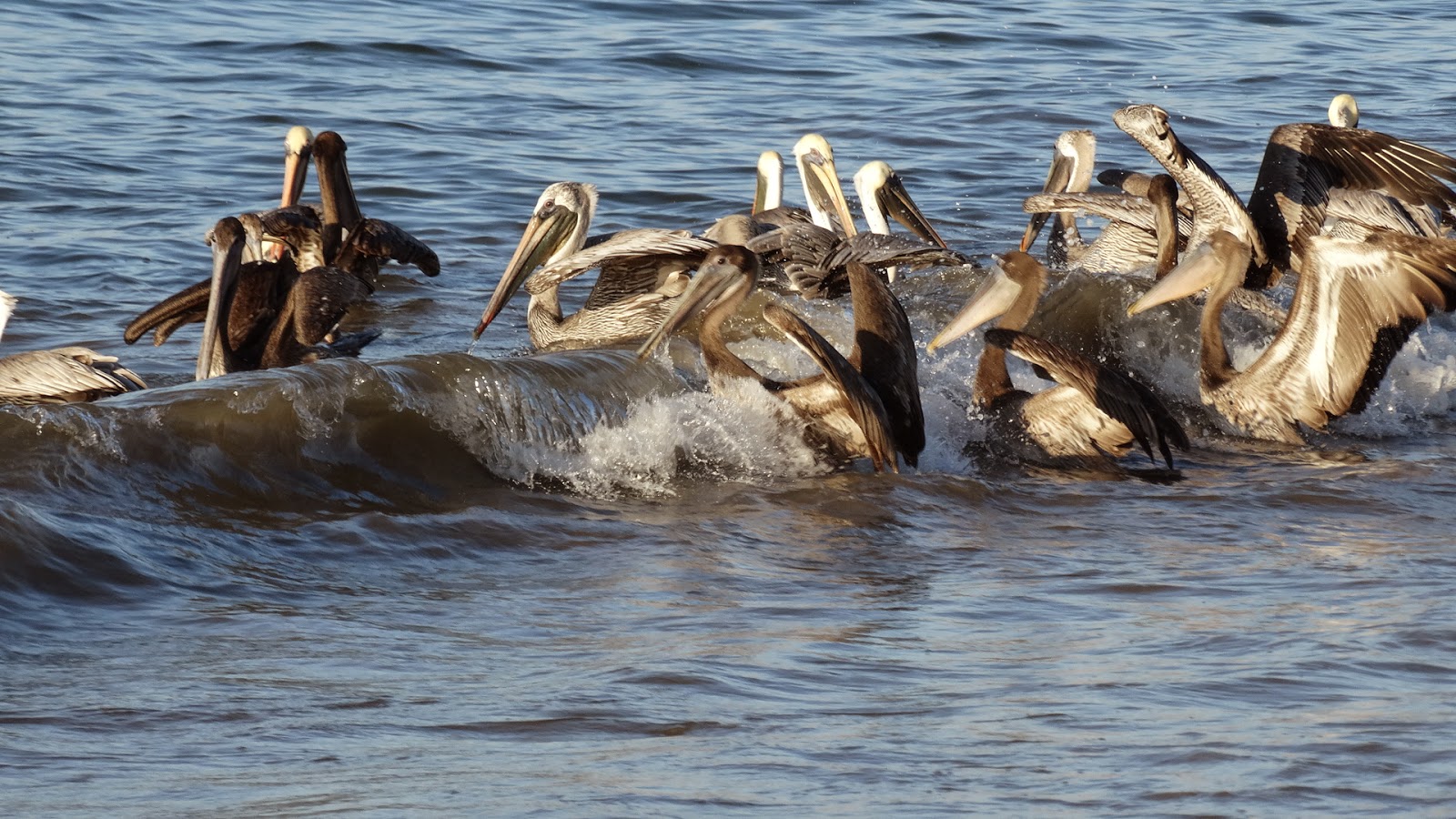 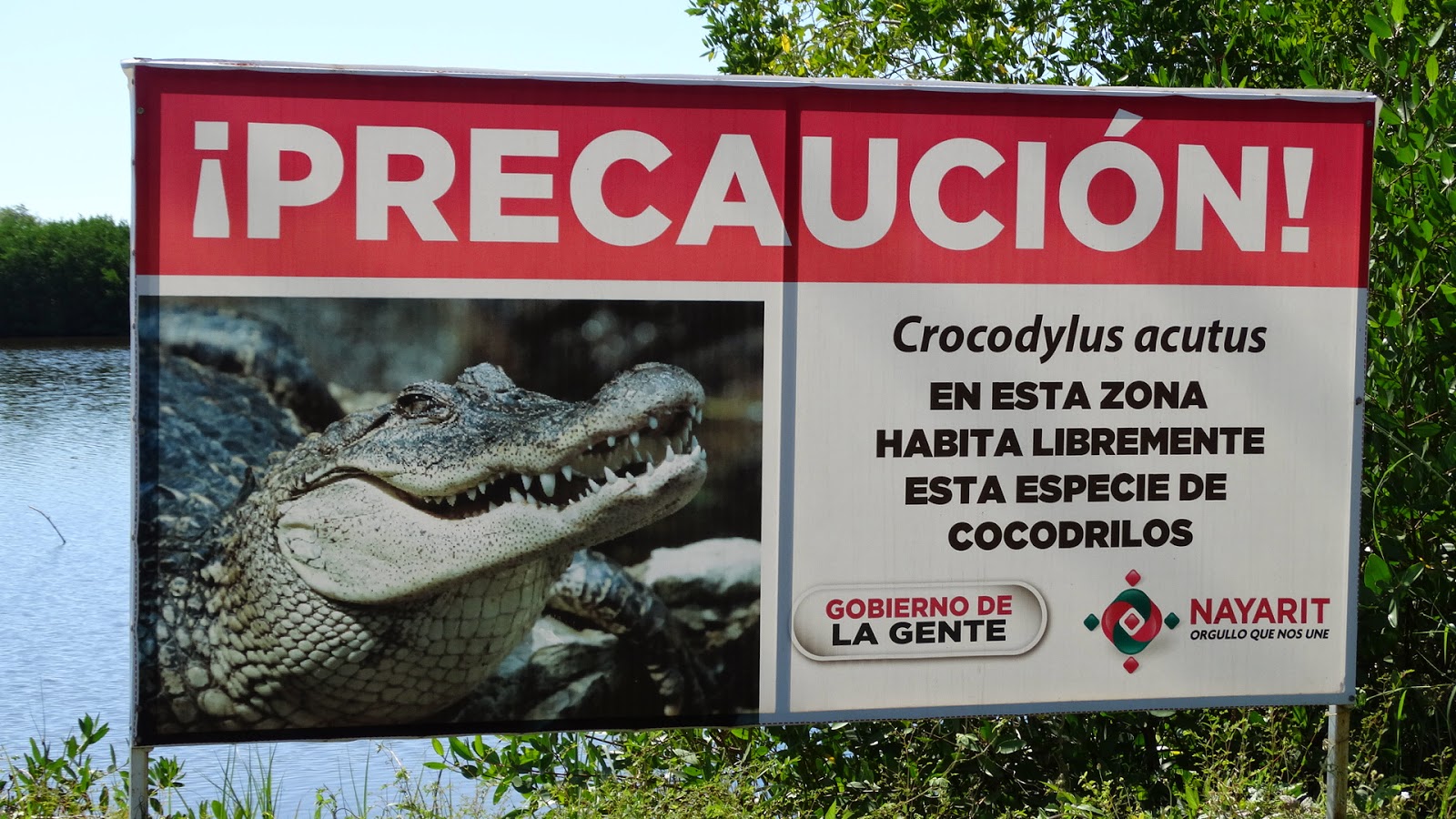 There are apparently lots of crocodiles around, but this is the nearest we have got! so far!!