Chris finally gets to be Intrepid

Chris decided that we would be intrepid and go to Monte Alban by public transport, which meant going via Oaxaca. We first took a bus into Oaxaca for 12 pesos (60p) each, and the driver said he would tell us when to get off for the bus to Monte Alban, which he did - 3 stops after we should have got off! There was little chance we would find the right bus now, so took a taxi to Monte Alban 100 pesos (£5). We spent about 3 hours in the ruins and then got a tourist bus back to Oaxaca for 25 pesos each (£1.25), so far so good!. Determined to get the bus back to El Tule we walked in circles for about 1.5 hours, directed first to one bus depot to another. Twice we stopped a taxi and they both wanted 150 pesos!! Eventually we spotted a 'colectivo' going to El Tule, these can be anything from a car to a minibus that do fixed routes and pick-up and drop off on the way (very much like the Grande Taxi in Morocco). There were already 2 people with shopping in the back, so Chris took the front seat, thinking she had the best deal! Wrong! 5 minutes later the taxi stopped and a rather large lady opened the front door and squashed in next to Chris! Half way back the large lady got out, only to be replaced by an even larger lady, with 2 shopping bags, 2 minutes later. So Chris finally got to be intrepid, 7 years after the Grande Taxi ride in Morocco that christened the blog (see panel to right).

The next day we finally dragged ourselves away and drove to the coast to Puerto Angel (Anhel), originally for 2 days, but turned into 4. We had been told of a web site called IOverlander set up a couple of years ago by an overlander who was a computer games designer, he detailed every location he stayed at and provided the ability to 'check in' to existing sites to confirm they are still open and comment on their experiance and also to enter new locations. The web site said that this was a nudist beach and a Hippy Paradise and we were not disappointed! When we arrived they were building a new road and the normal entrance was blocked, but a guy came up, introduced himself as a volunteer life guard and led us to the site, he told us the price was 100 pesos per night and asked if we wanted to buy any weed! We camped behind some cabanas on stilts right on the beach, next to a large crowd of young French girls who were constantly running into the sea naked. Not to be outdone a Mexican girl spent about 2 hours one morning doing Yoga in just a G string, before finally removing that and running into the sea (not that I was looking). Whilst there we met up with Mike and Shannon again (not Shona as I previously thought) plus another couple on a single motorcycle (Carl and Kathleen), who had previously spent 14 years traveling the world by boat.

After finally dragging ourselves away (or was it Chris dragging me away?) we had one more beach stop before heading into the Yucatan peninsular touring Mayan ruins. The beach was deserted and very windy so moved on the following day, camping outside a Hotel the following night and actually staying in a Hotel  (£17.50) the night after in order to visit San Crystobal and dropped our laundry into the launderette over the road. It dawned on us the following morning that it was Sunday and the launderette might not be open! It wasn't, but the Hotel Receptionist called her and she came and opened up for us.

As we approached the first of the Mayan sites the scenery changed to being very lush and green and except for some of the exotic trees looked very much like the UK, in fact the road leading up to Tonina looked just like Stowe Gardens!

Next we visited some rapids and a Waterfall, before a 2 night stop at Palenque, to give us a full day at this rather amazing location. The first night I was woken by what sounded like dinosaurs roaming through the camp site,, the noise was deafening and woke everyone in the camp site (except Chris). If I had not read on IOverlander that the place was frequented by Howler Monkeys it might have scared me to death! They make an amazing amount of noise for their size. This Archaeological sight was occupied by the Mayans from 300 to 900AD after which it was completely overgrown by the jungle for almost 1,000 years and whilst the temples, pyramids and palaces have been cleared there are many buildings buried in the jungle and the site covers many acres. We hired a guide for this one who was very interesting and informative and told us a lot about some of the other sites as well..

We are now on the beach again, but moving on tomorrow to continue our archaeological tour. 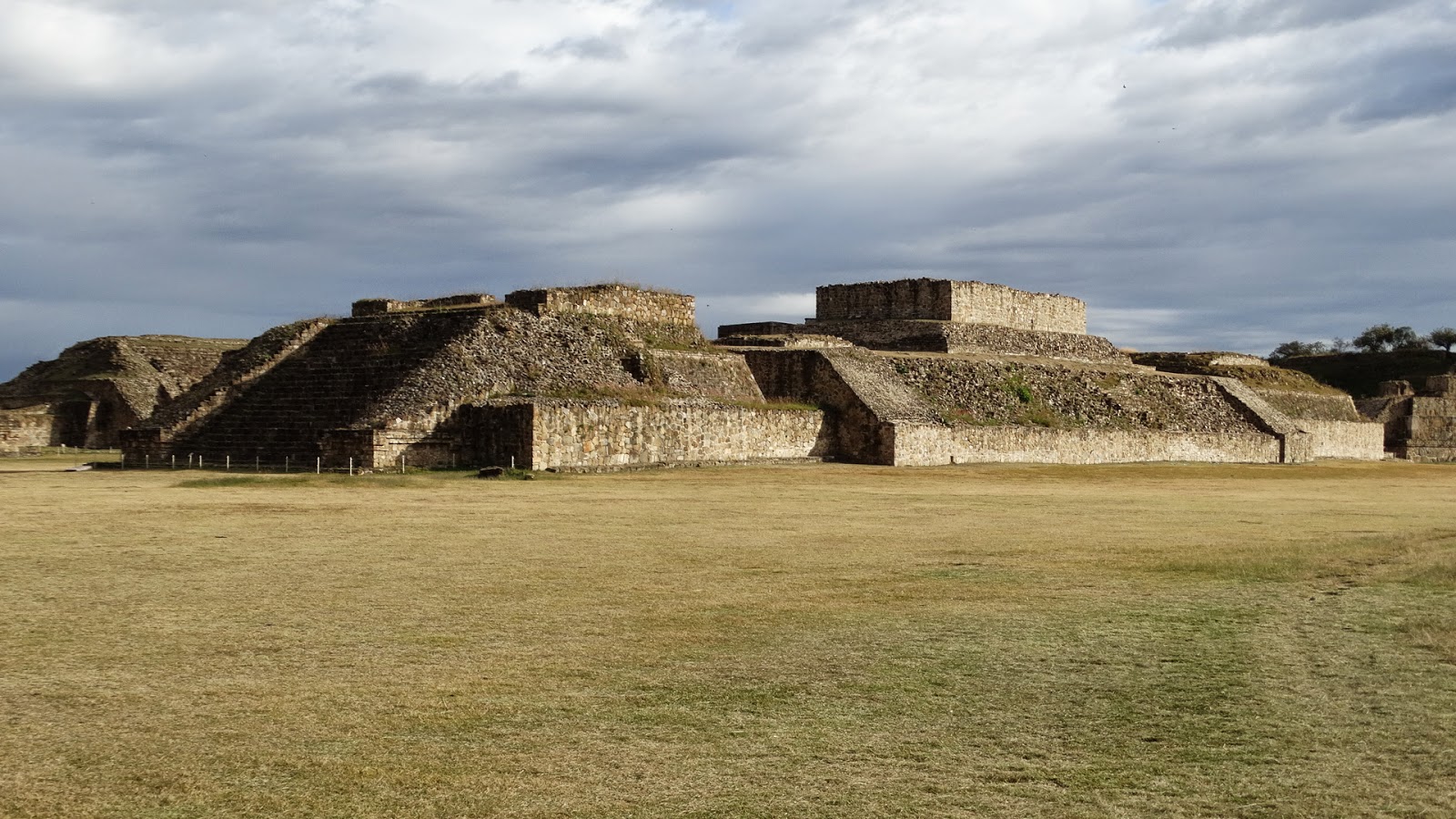 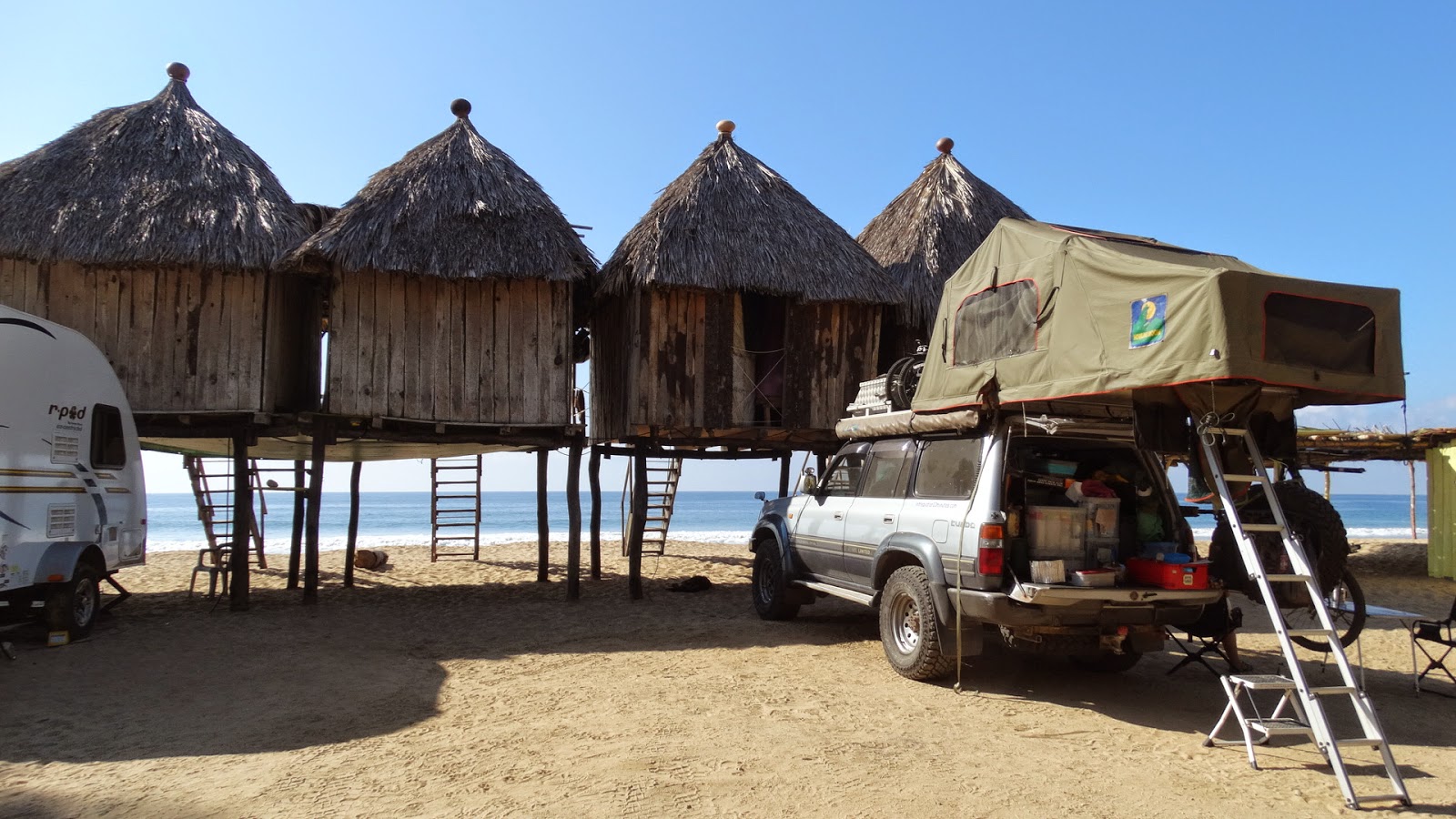 Camped behind a cabana on the beach at Puerto Angel 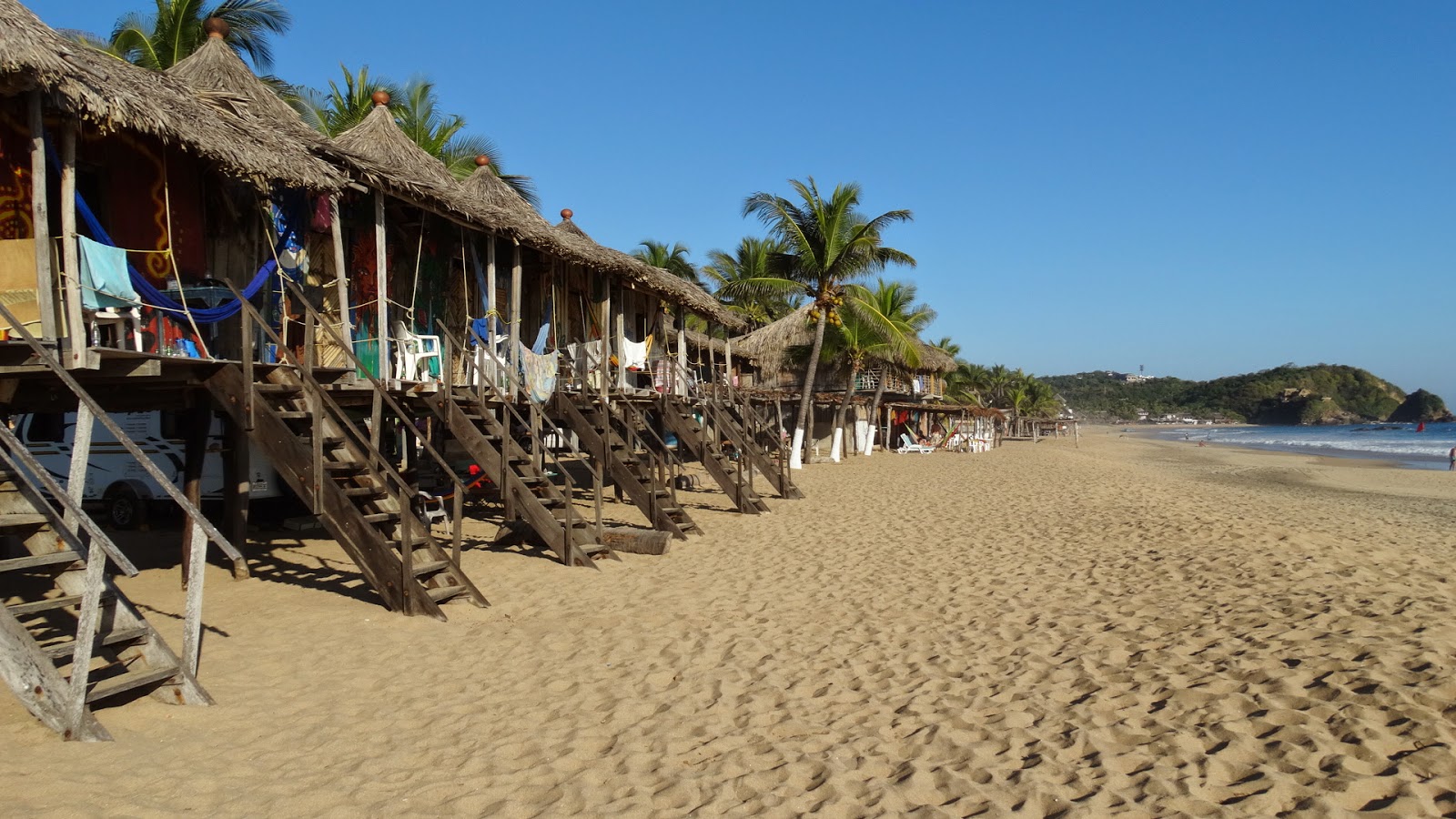 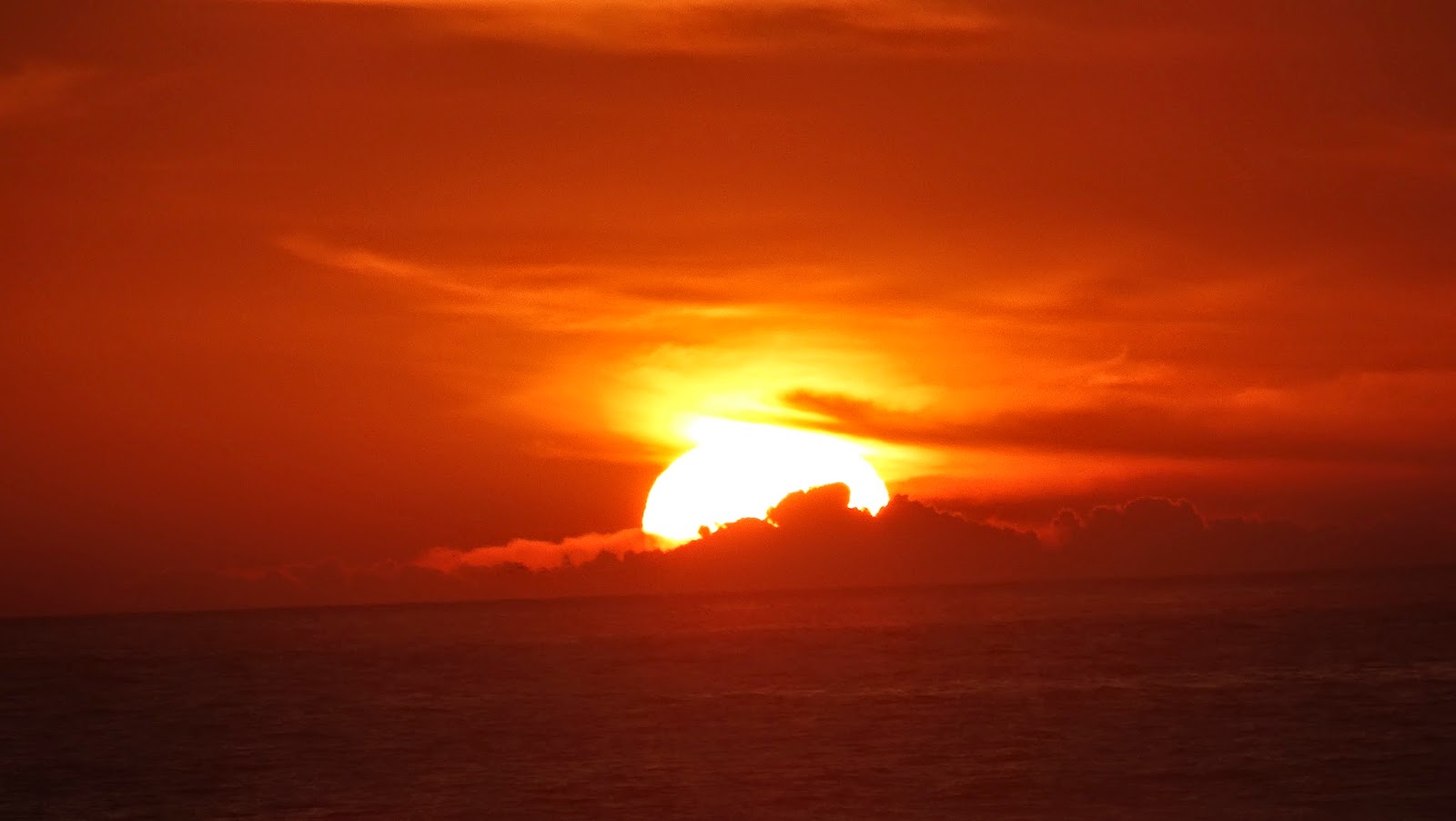 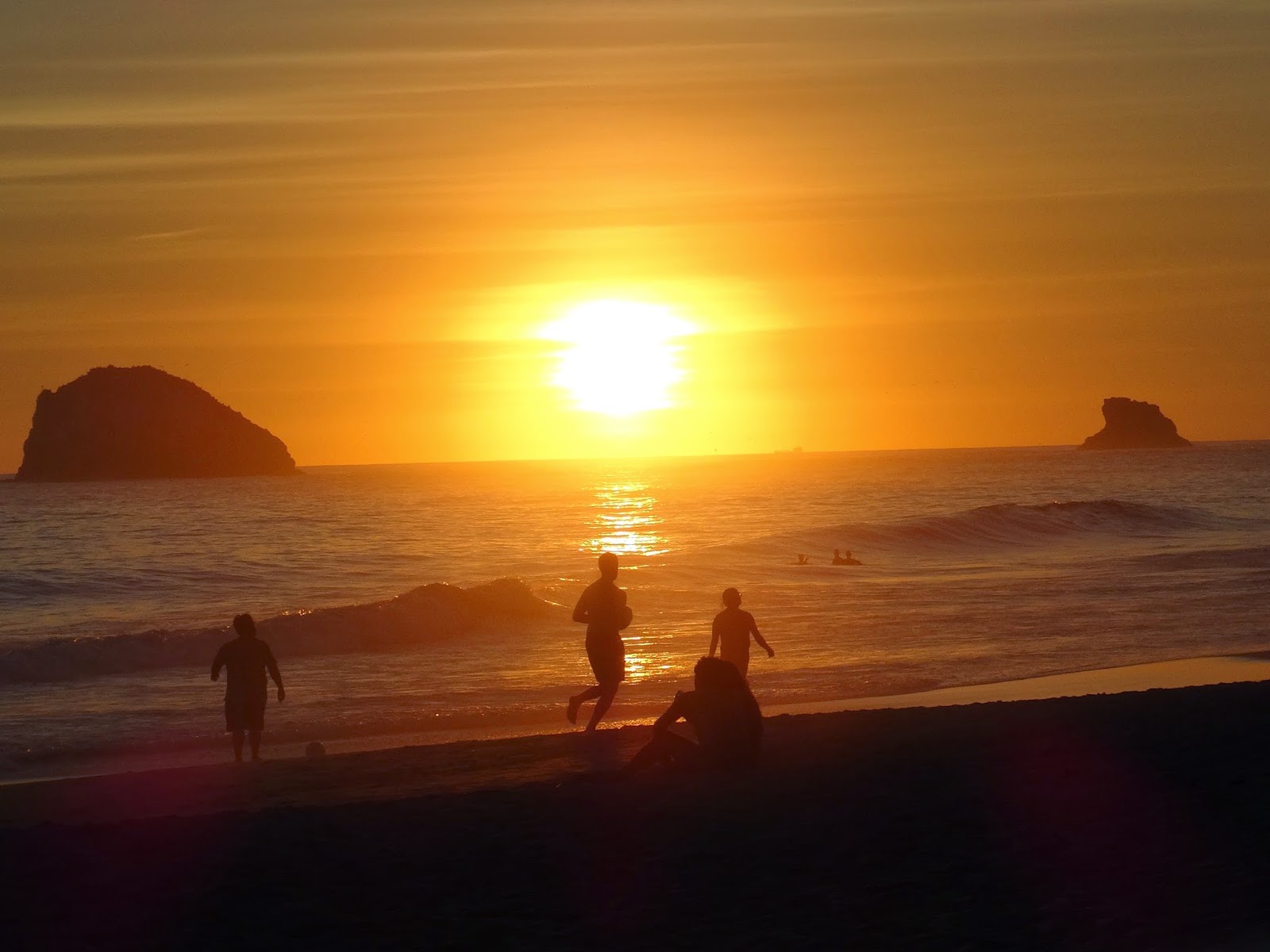 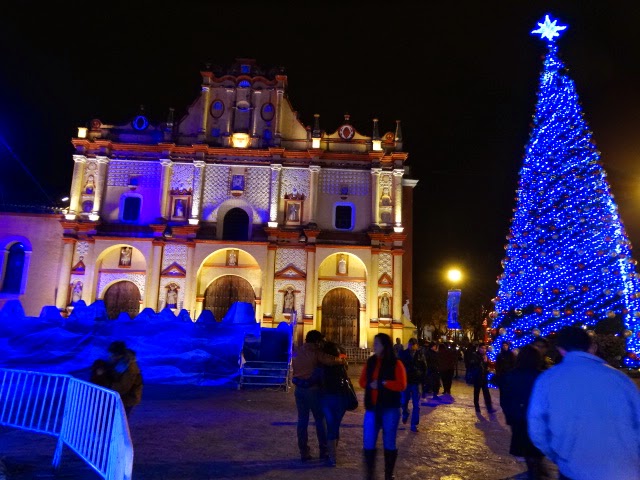 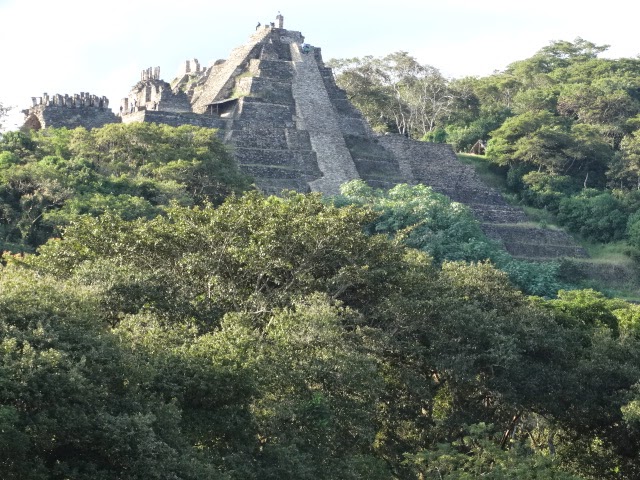 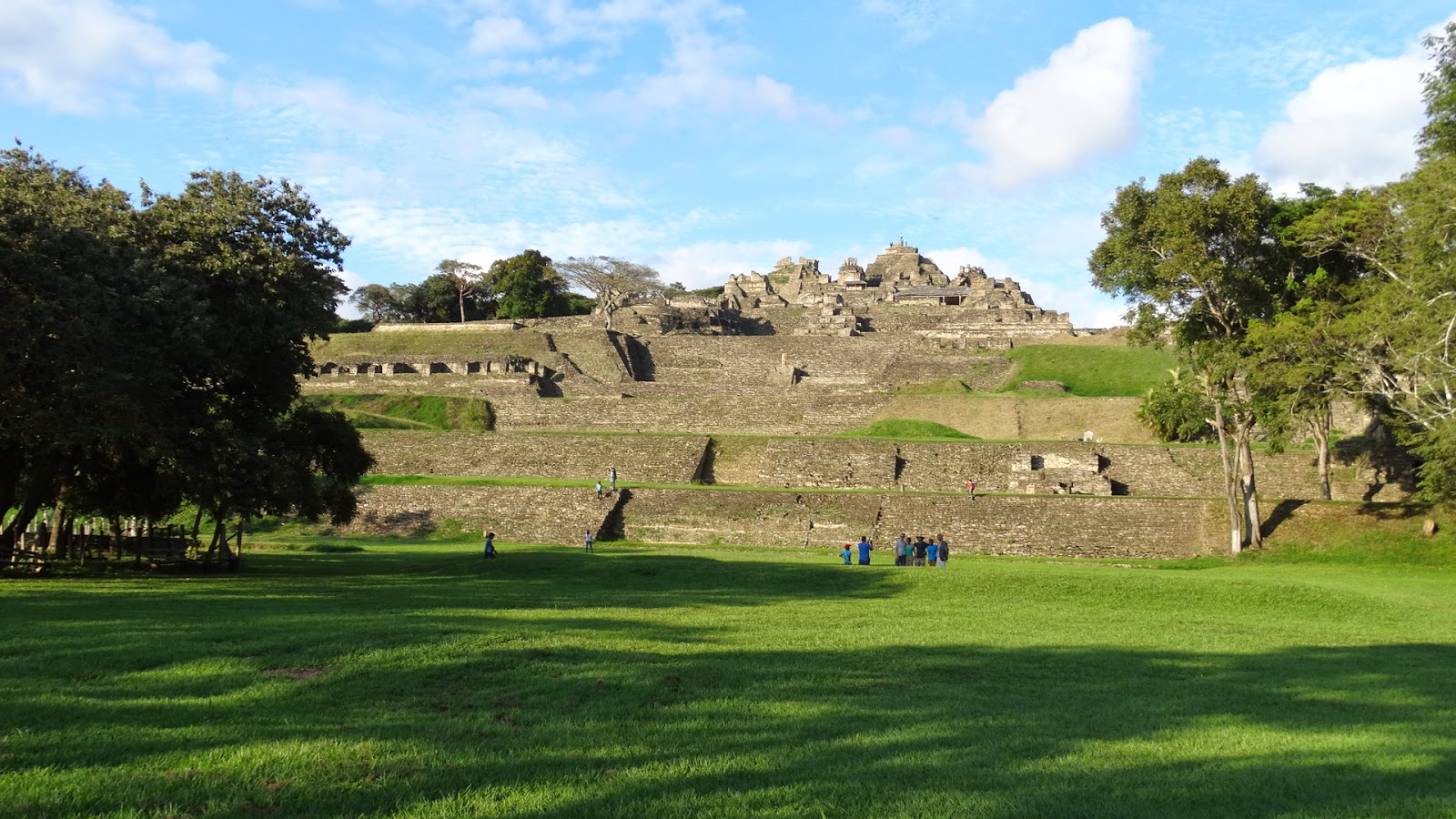 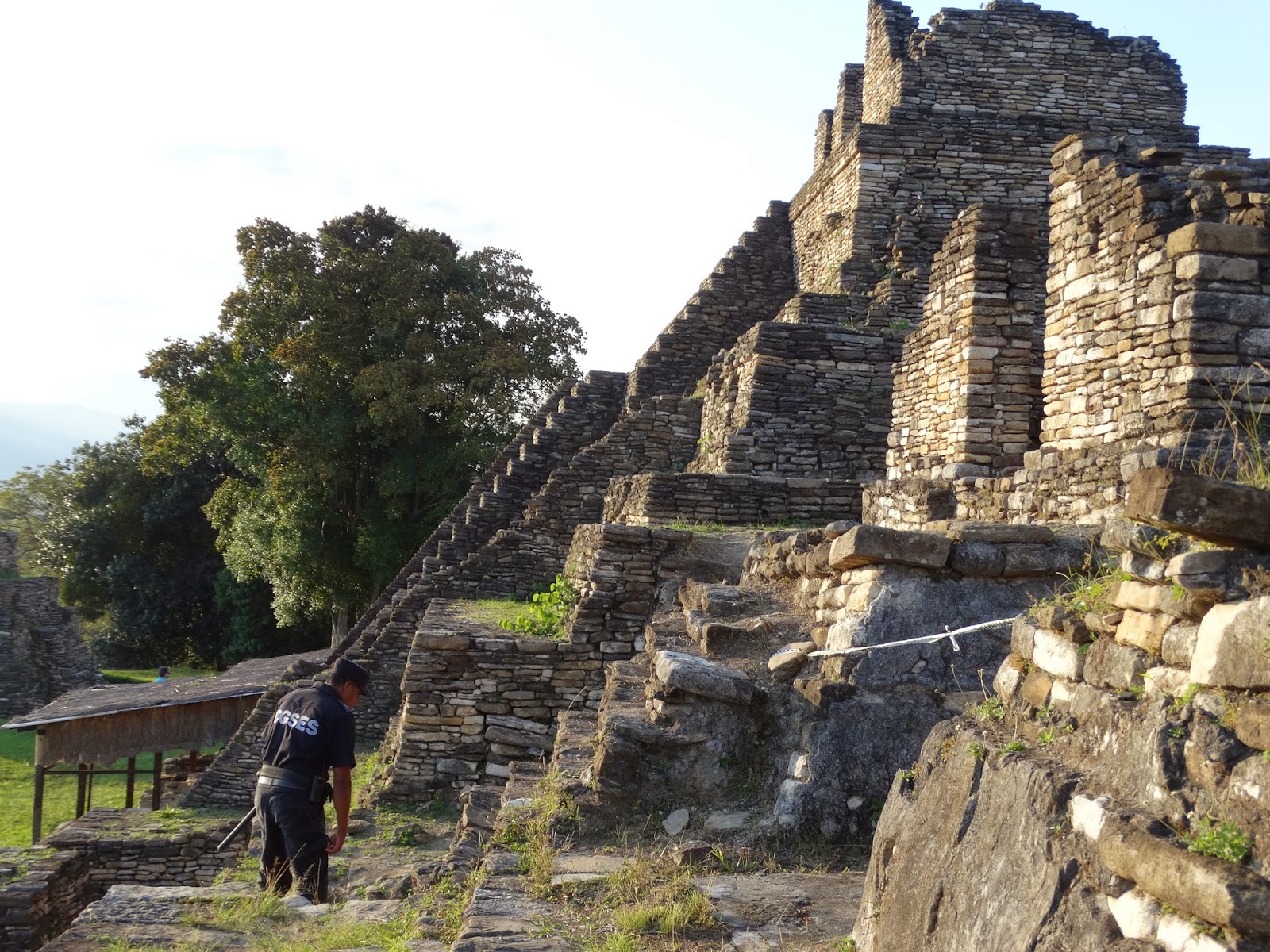 The steps were very narrow and very steep 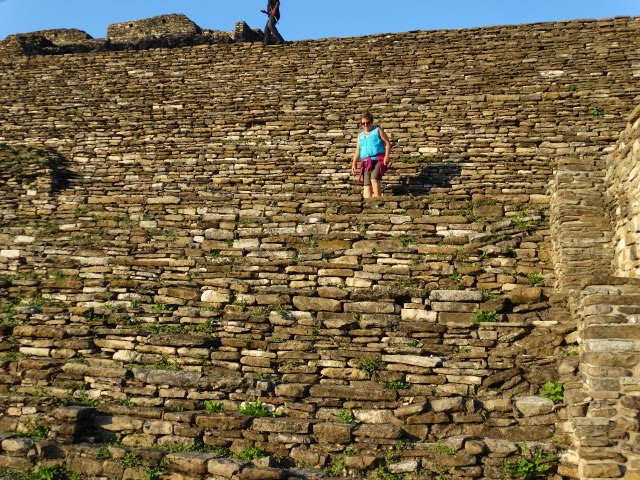 Chris struggled for a while 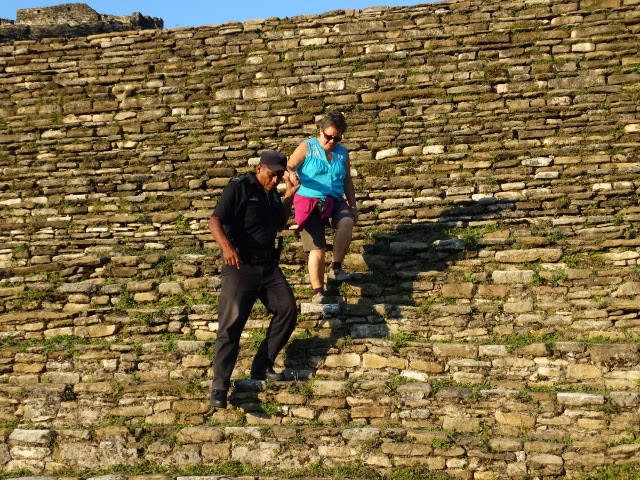 And was eventually helped down by the guard (someone had to take the photo!) 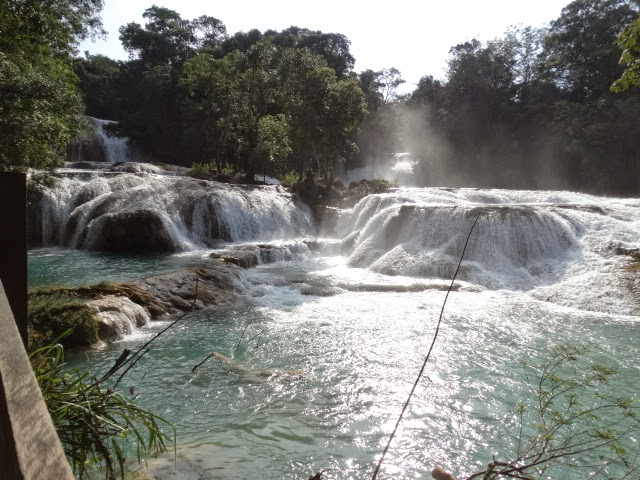 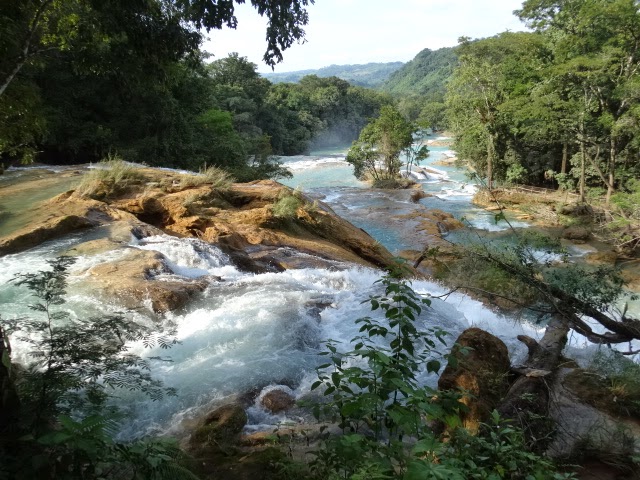 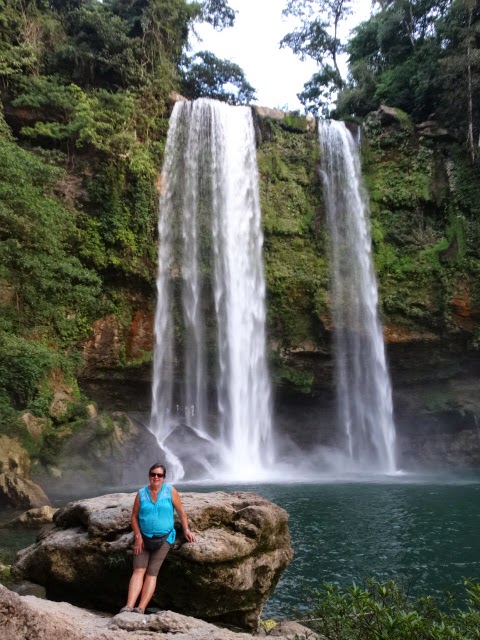 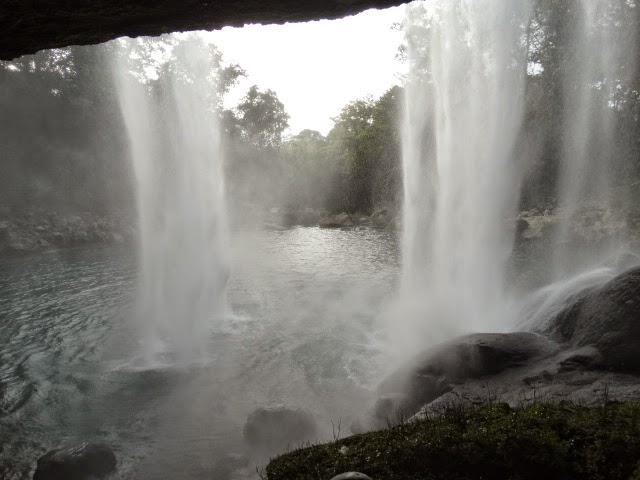 Taken from behind the waterfall 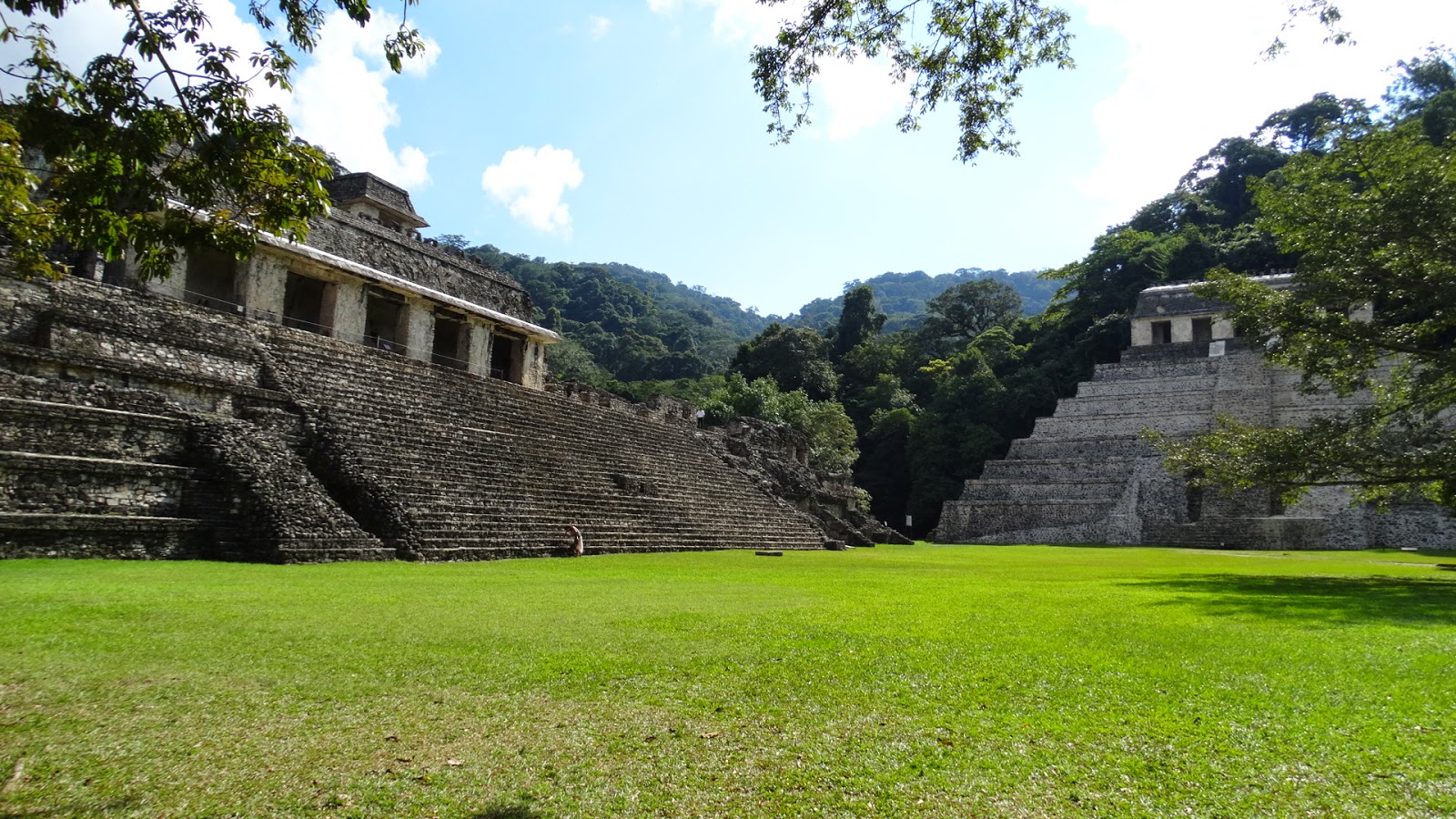 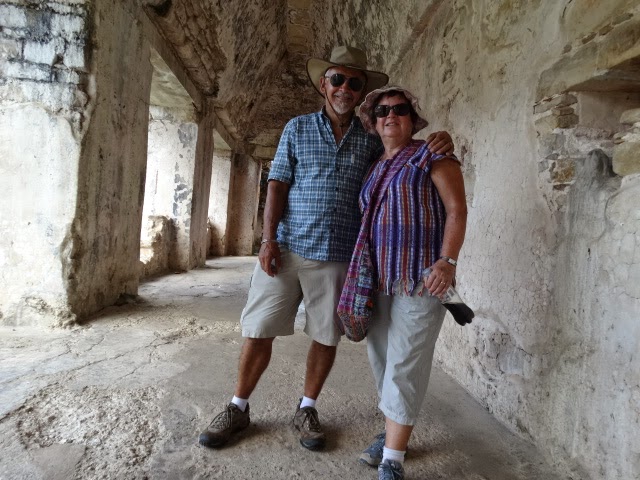 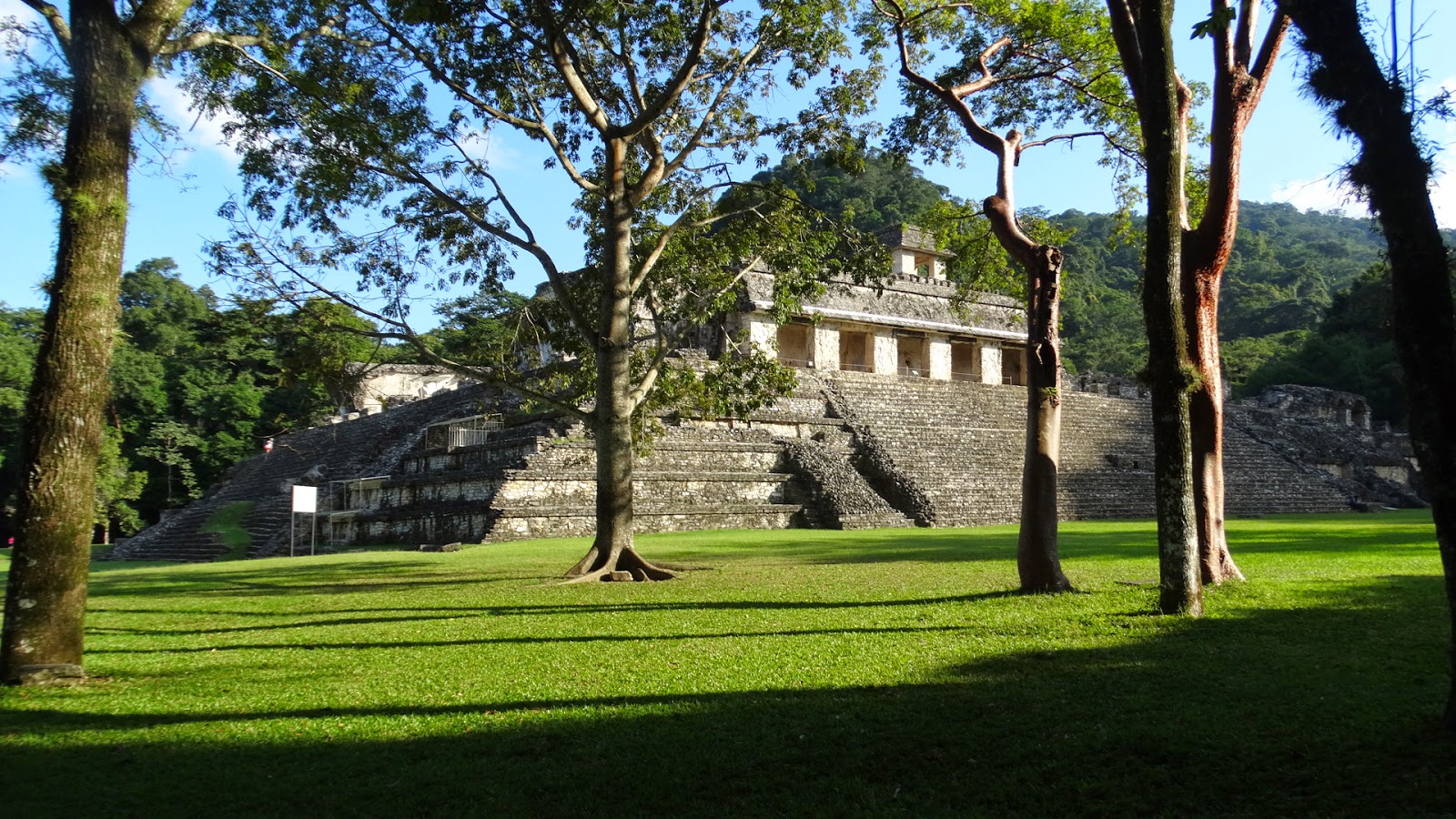 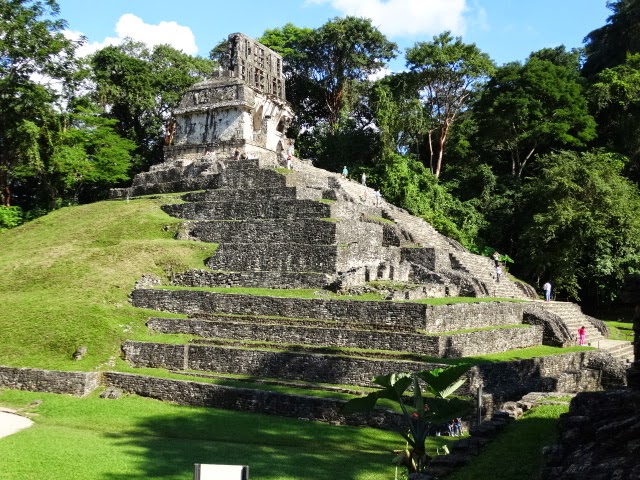 This one still part overgrown 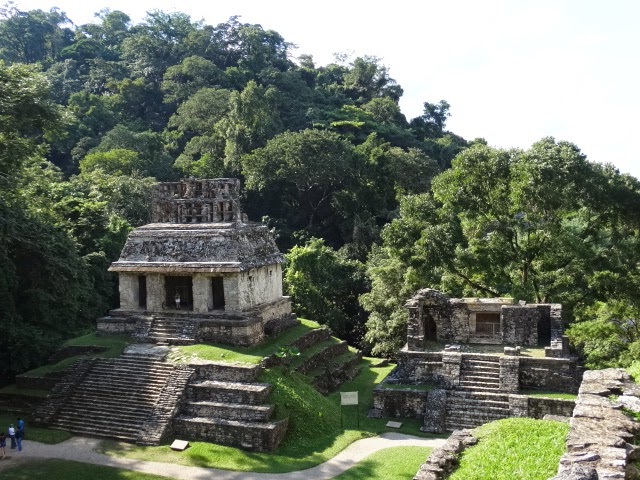 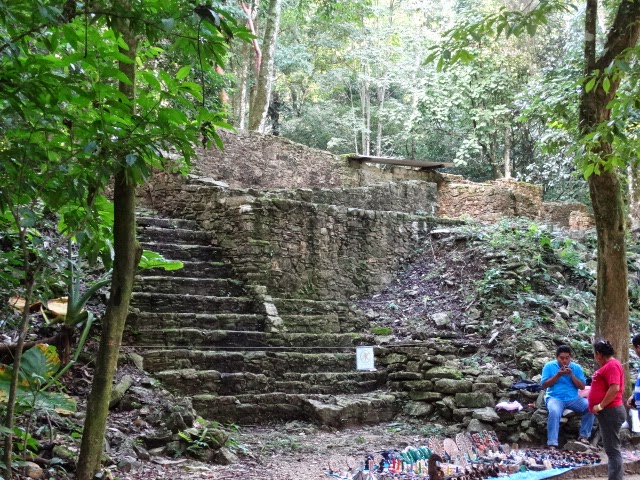 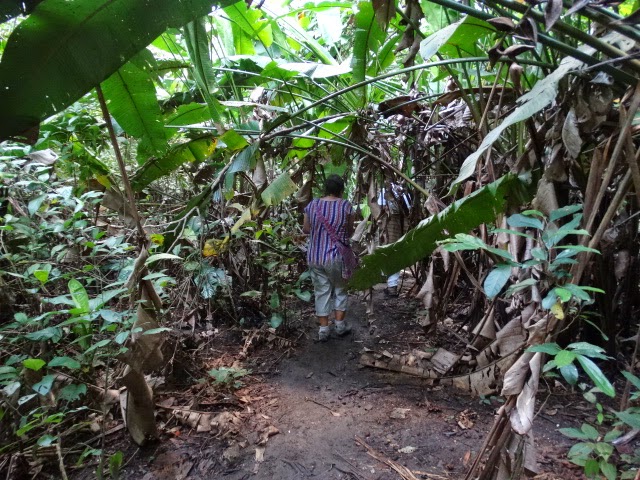 Chris of the jungle 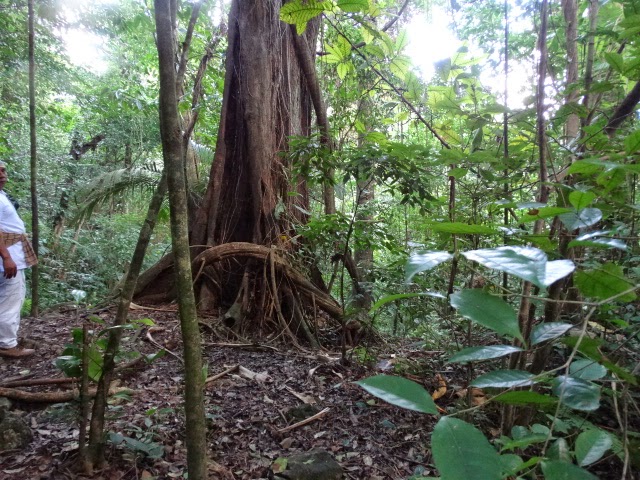 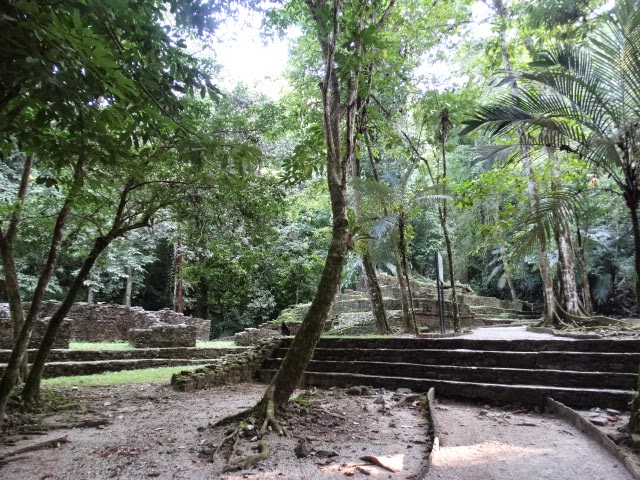 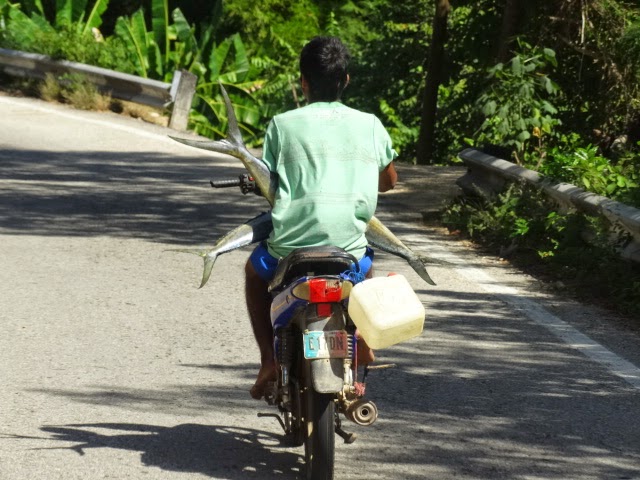 We couldn't work out how he was keeping hold of these until we got past and realised they were in a large bucket between his knees.