Once more into the breach (or is it - to the beach?)

After starting the process of re-aquiring the cruiser at 14.00 on Monday, we (myself and George who shared our container, plus Ivens, from Brazil, (who had a seperate container) were at the breaking of the container seals at 08.30 on Wednesday morning and got proof that it was actually there when they opened the doors. But it still took until 14.00 that day before we could finally drive out of the port. We were assisted with much of the process by a very friendly and efficient young lady called Rosalba, spending hours in her office whilst she chased each of the processes through the system so we could move on to the next step.

As soon as we were out we collected our bags from the Air B&B and high tailed out of Cartagena to park in the car park of a mud Volcano 40 miles up the road (we once parked in the car park of a mud volcano in Romania, but there the similarity ended). We negotiated a fee with a tour company to use their bathroom facilities and he then proceded to sit on a step behind us and watch our every move, which made us think we had suddenly been teleported back to Mongolia. We gave him a beer, dinner, with wine and then he went home and locked the facilities!!! Fortunately, next morning another trader allowed us to use his facilities for a fee of course and as we were leaving the first guy reappeared and asked for the money for the use of his facilities, with the obvious response! If I could write in Spanish I would have given him a bill for beer, wine and dinner!

I must just mention that we were expecting to come back to the rainy season and they did have heavy rain in Panama for some weeks, but whilst we have been back we had 2 heavy thunderstorms in the night whilst in Panama and another, again in the night in Cartagena, other than that it has been dry and very hot, often in the mid 40's and sometimes hotter. After the Volcano we have come up to Minca and at 660 meteres is a little cooler, still mid to high 30's in the day, but cool enough to pull the covers over at night. We have had a rest day today before setting off for Punta Gallenus, the most northern tip of South America, accessable by 4x4 only, a starkly beautiful desert region, still inhabited by the original indigeanous people in thatched bamboo huts. 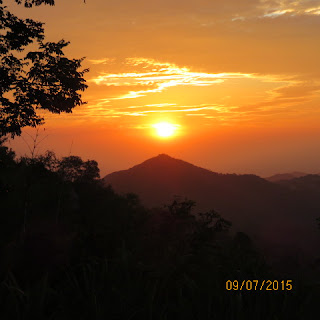