With the accident behind us and no issues getting into Peru we have probably had 2 of the best weeks on the trip so far (barring Galapagos), with some amazing drives on rough narrow roads with 1,000 metre drops and even more amazing walks to little visited archaeological sites, many of them only discovered in the last 20 years. Some of are mentioned in our Lonely Planet (printed in 2000), but many of them only available on horse back. The ones we went to now have rough roads to within an hour or two on foot, but they still have few visitors as the area is so remote it is too far for may Peruvians to travel.

But first back to where we left off (I had hoped to do another update sooner but we have been staying at the entrances to the archaeological sites with no internet access).

We are not big on cities, but Cuenca, second largest (and money capital) city in Ecuador is a refreshing change. We stayed at a nice quiet, comfortable hostel near the centre, up a set of steps from the river that bisects the city. Not too busy and a lot of nice architecture and nice  restaurants (it even has a micro brewery with some pretty good beer!). We spent the best part of a day in the main museum, that covers the history of all of the diverse populations of Ecuador and has an archaeological site within the grounds. The highlight though was the section on the Shuar people, natives of the amazon, who killed people  with poison blow pipes and shrunk their heads and there are a number of shrunken heads exhibited, including heads of Sloths. The right of passage was to 'hunt' and kill a sloth and then shrink its head in preparation for the real thing (hunting a sloth is not difficult as they move very slowly!). They no longer shrink human heads but still practice on sloths, and apparently women, children and white people were not worthy!

Next day we visited a few more sights including the Panama Hat Museum. Panama hats are not from Panama! They are made in Ecuador, called Panama hats because the Spanish originally exported them to Panama and all of the workers on the Panama Canal wore them.

Next to Loja, which we were told was also nice but not a patch on Cuenca (except the re-built entrance and bridge at one end of the city), it rained most of the time with very low cloud so we were not able to see the views of the mountains which are apparently spectacular and no decent restaurants.

Next stop (last in Ecuador) was Vilcabamba, a small town set in a spectacular valley an at last the clouds had cleared and the sun was out. We stayed a mile or so up hill from the town, in the car park  what is best described as a holiday village, a large area on the hillside developed by a German, with cabins dotted around, a nice swimming pool, a bar and restaurant with a spectacular view of the valley and a series of walks up the opposite hillside. So nice in fact our one night stop turned into two and I spent the afternoon doing all of the walks, which was good preparation for a beer in the sun when I got back (Chris spent the afternoon in and around the pool).

The road we took into Peru has only been open for a few years and by all accounts was a very rough muddy road, but (unfortunately) they have improved most of it, so except the last 16 miles was not the challenge we expected, and even this was  dry so not really a problem.

The border crossing took 45 minutes with no questions about the damaged door an we stayed at a hostel in the first town we came to. Next day we headed straight to Jaen (where we knew we could get insurance) and then on to the Chachapoyas area where there are a lot of pre Inca archaeological sites and camped outside the ticket office for a walk to a waterfall. Whilst not an archaeological site it is interesting in that 10 years ago it was still classed a sacred and no-one was allowed to go there (we were originally told it was discovered 10 years ago, but this is ridiculous as it is huge an can be seen for miles!).

That night we went for a beer in a nearby Hostel, empty except for the cook (Mercedes) an her niece (Ellen) practising English, which Chris soon involved herself in. Mercedes had huge difficulties with trout and kept pronouncing it trouch. Later we had dinner and could hear her trying to get it right from the kitchen.

Next day was bright and sunny and we went back to the Hostel for breakfast, Mercedes was still shouting 'trouch' in the kitchen an Ellen had on a good pair of walking boots so I asked her if she was a guide, she was, so we decided to 'splash out' on a guide for the vast some of £6. The walk started in bright sunshine, which turned into torrential rain and back again during the 6 hour walk (which turned into a 6 hour English Spanish lesson, with lots of laughs on the way. We got back late and tired so stopped another night and ate at the Hostel again (with Mercedes still shouting trouch from the kitchen).

Next night was sleeping in the car park of a Hostel in Chachapoyas, but was clear the main attraction was the sites in the surrounding area and not the city itself, though there was a nice pedestrian street with lots of balconies and a good restaurant where I had the first decent steak for a long time.

The next 5 nights we stayed in various archaeological site entrances, the first on a village green at the entrance of the Sarcophagus of Karajia, where a lot of small children abandoned the trees they were climbing and decided to climb the ladder of our tent instead, at one point we had 9 kids sitting on or hanging off the ladder. More about the sites with the photos, but the next night was on top of a cliff at the entrance to the Puebla des Mortes (the village of the dead), then in the car park of the biggest site (Kuelap) and finally 2 nights on a patch of ground close to the main square of another small village at the entrance to Revash. Here we asked the 2 girls in the ticket office where we could stay, they took us across the square to a piece of disused ground and a few minutes later turned up with a sack and a spade to pick up  all the litter and horse droppings around us.

Whilst at Revash we met a young French couple that had managed to get a lift up to the village were struggling to find a way back, so we did some re-arrangement and gave them a lift (one on the small seat and one on the safe). They were heading for the museum just outside the village of Leymebamba, which was also our next stop, so we took them to the museum and then dropped them in the village before heading back towards the coast. But a few miles later we were stopped by a small bus who told us the road was closed at the bottom of the valley (3 hours away) as they were replacing the bridge over a river. We were aware of these works and that for the past few weeks it was only open in the early evening, but they had reached a point where they could no longer open it and would be closed for  a week or so. Unfortunately it is the only way over the mountains in this area so we were forced to back track more than halfway back to Ecuador in order to skirt round the mountains to the  coast, so we ended up staying in Chachapoyas for another night.

We are now staying outside a hostel full of surfers on the coast, after visiting more archaeological sites, but I will leave that until the next episode, starting with the amazing pictures of the mummies taken in Laymebamba museum. 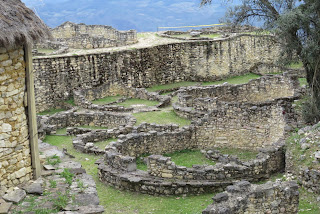 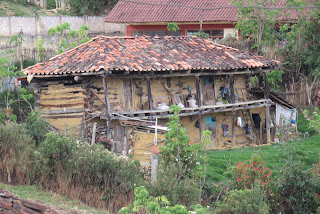 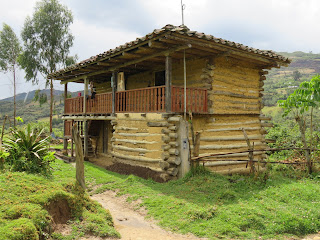