A New Lease of Life

My apologies if the last blog was not up to its normal standards, but I was somewhat concerned about events occurring with the cruiser. As well as the steering problem we had re-broken a bracket on the rear suspension (one that had already been welded in Peru) and also needed fuel filters and front brake pads changing, so Hans took me to the garage that was currently repairing the radiator on his Land Rover.

The mechanics cleaned the oil from the steering box, identified where the leek was coming from and said they were believed they could fix it and that although Toyota did not have the appropriate seals they were confident that a specialist company could match all of the seals and O rings with those from other manufacturers. I confess I was very dubious but agreed to let them go ahead. They said they would need to keep it for 2 or 3 days so Hans let us stay in the spare room in his house (actually a converted barn) for the same price as camping (all 6 rooms in the hotel were occupied anyway so worked out very well for us.

Two days later Hans took me down to see how they were doing with both vehicles and my steering box was spread out on a bench (and was a lot bigger and heavier than I realised).
Next afternoon they called to say the steering box was finished, they had made a new bracket to replace the broken one and changed the front pads, but would not have the filters changed until the following morning.

On the morning of day 4 I picked up the truck and took it on an 85 mile trip into the mountains with quite a few bends and although there was no apparent leak the level had dropped and needed topping up! The hope was that there was air trapped in the system and that all of the bends had managed to purge the system, so the day after we did another 100 miles and this time there was no leak at all!


So, having resigned ourselves to doing the minimum in order to get back to Uruguay, suddenly we get a new lease of life and decide to go on a mini adventure.

We had been told of an excellent gravel mountain road north west of Mendoza (with 360 bends in one section), so the following day we headed for this road and continued in a 6 day loop north of San Juan with lots more gravel roads and hairpin bends and ended up reversing the excellent mountain road on the way back as it was so good.

So we are now back with Hans, having done over 1,000 miles (and a lot of bends) since I last topped up the steering fluid and it hasn't lost a drop (and thank God I don’t have to carry the steering box back to the UK to get it fixed!), and almost ready to start back towards Uruguay and home. We have stayed on the western side of Argentina as long as possible as the weather here has been 25 to 30 for the past few weeks, but the weather on the eastern side, i.e. Uruguay and Buenos Aires, has been awful.  But leaving the best till last we went back to Finca Agostino for lunch yesterday (we went there last year) but this time we had the 5 course meal with 5 different wines (we had the 3 course last year) and it was even better. 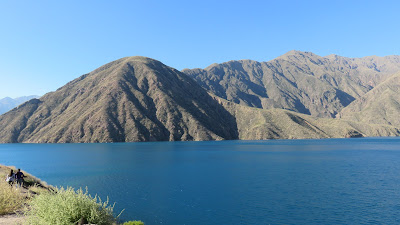 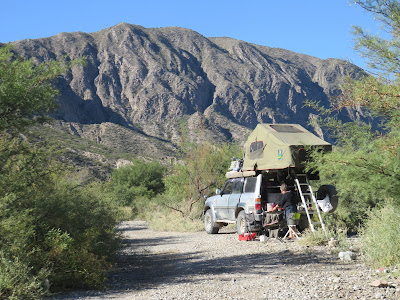 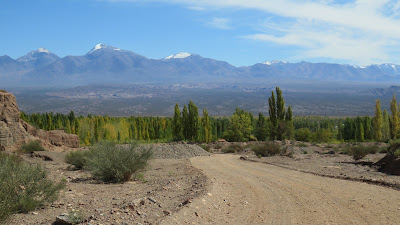 Hans took this as we left, I cleaned the cruiser the day before and given the varios batterings it has had it looks as good as the day we left! Of course he had to get his Landrover in at the end