Mexico, you either love it or hate it, we came for 5 weeks and stayed for 10 so I think that speaks for itself. The overriding impression is one of chaos, but somehow it all seams to work and noise is a constant factor in Mexican life. Mexican bands are made up of a variety of string and wind/brass instruments and their music always sounds like a competition as to who can finish first, they start each piece at an alarming rate, each seemingly trying to go faster than the others, but somehow all manage to finish at the same time. If a restaurant has a band on they will often leave the background music and a number of TV's on at full volume at the same time.

The towns are also a cacophony of noise, each have their own festivals which often go one for 10 day. In Ajijic each day of their festival started at 06.30 with fireworks, 50 on the first day and increasing by 50 each day. These are not fireworks as we know them as there is very little light, just a small flash, but with an ear splitting bang, the day we left  it was up to 350, after which the church bells chimed, then the dogs barked, and a band would then start up at the usual alarming rate.

There is also a noise for everything, trucks delivering gas bottles constantly play a little song, other trucks drive around with pre recorded messages playing over loud speakers, street sellers on 3 wheeler bicycles will hoot with bull horns and/or shout at the top of their voices, one of these sold purified water in 20 litre plastic bottles (which we purchased quite a few of) and he just shouted what sounded like Four. In St Maria del Tulle a truck came round selling fish and seafood, with the passenger shouting into a microphone, broadcast through two speakers on the roof, I was reliably informed that absolutely know-one could understand what he said, but everyone new it was the fish man. My favorite was the guy selling steamed bananas from something that looked like a metal dustbin with a chimney on top and every now and then would let off some steam through a whistle that sounded like a train was coming.

But it is the roads that take some getting used to. I am convinced that the choice of whether roads have dotted or solid lines  is purely down to how much paint the guy has that is painting them as the road markings are dubious at best and everyone (including me now) just ignores them anyway, even the double lines (which in truth are more or less where they should be). Often a long straight road, with dotted lines will have 2 huge no-overtaking signs at each side of the road for no apparent reason.

All road signs are irrelevant anyway as the traffic is controlled by the Tope (Topay). These are we would know as sleeping policeman, but in Mexico its more like an army, there are hundreds of then, anything from metal studs in the road, to concrete semicircles a foot high. Sometimes they are painted yellow with warning signs before you get there, others have no paint and no warning. They must also put them in different places when they resurface the roads as they are often not where the warnings signs says they are. Some villages have dozens of them, before and after every junction and pedestrian crossing. Apparently they are starting to phase them out and roads that have been re-surfaced will have no Topes at all, but still have the warning signs up. I frequently found myself slowing down for the shadow of a lamp post or tree and then almost take off when think its a shadow and isn't.

In traffic topes can actually be a benefit, as the cruiser can take them a lot easier than most other vehicles, especially the boy racers with their low body work and low profile tyres that have to inch over them and sprint to the next one, if there's nothing coming the other way I can overtake at least one vehicle per tope and go from being stuck behind half a dozen trucks and buses going into a village to being past all of them by the time we exit.

After all this it is then a question of getting used to what the indicators are for, as it is rarely for turning left or right. Hazard lights mean that they are about to make a manouver, this could be turning left or right, stopping at the side of the road or slowing down for a tope, made even more confusing when they simply carry on with the hazard lights on afterwards. When a driver puts on his left hand indicator it is generally to tell following vehicles to overtake him (in America and Europe drivers would indicate left) but for us it is confusing as it might mean that they were actually going to turn left! However, this conundrum was finally resolved when I came upon a large truck indicating left and slowing down as he approached a left hand turn. Suspecting this guy was actually going to turn left I slowed down, only to be overtaken by the 2 cars I had just overtaken at the last 2 topes. I still waited, but the truck sat patiently until I also had passed then he turned left. The meaning is therefore clear, the primary function of the left hand indicator is to tell other vehicles to pass, actually turning left will only be undertaken once all following vehicles have gone past!

From what I here it just gets worse as we go south! - Bring it on - if they drive bad I can drive badder!! 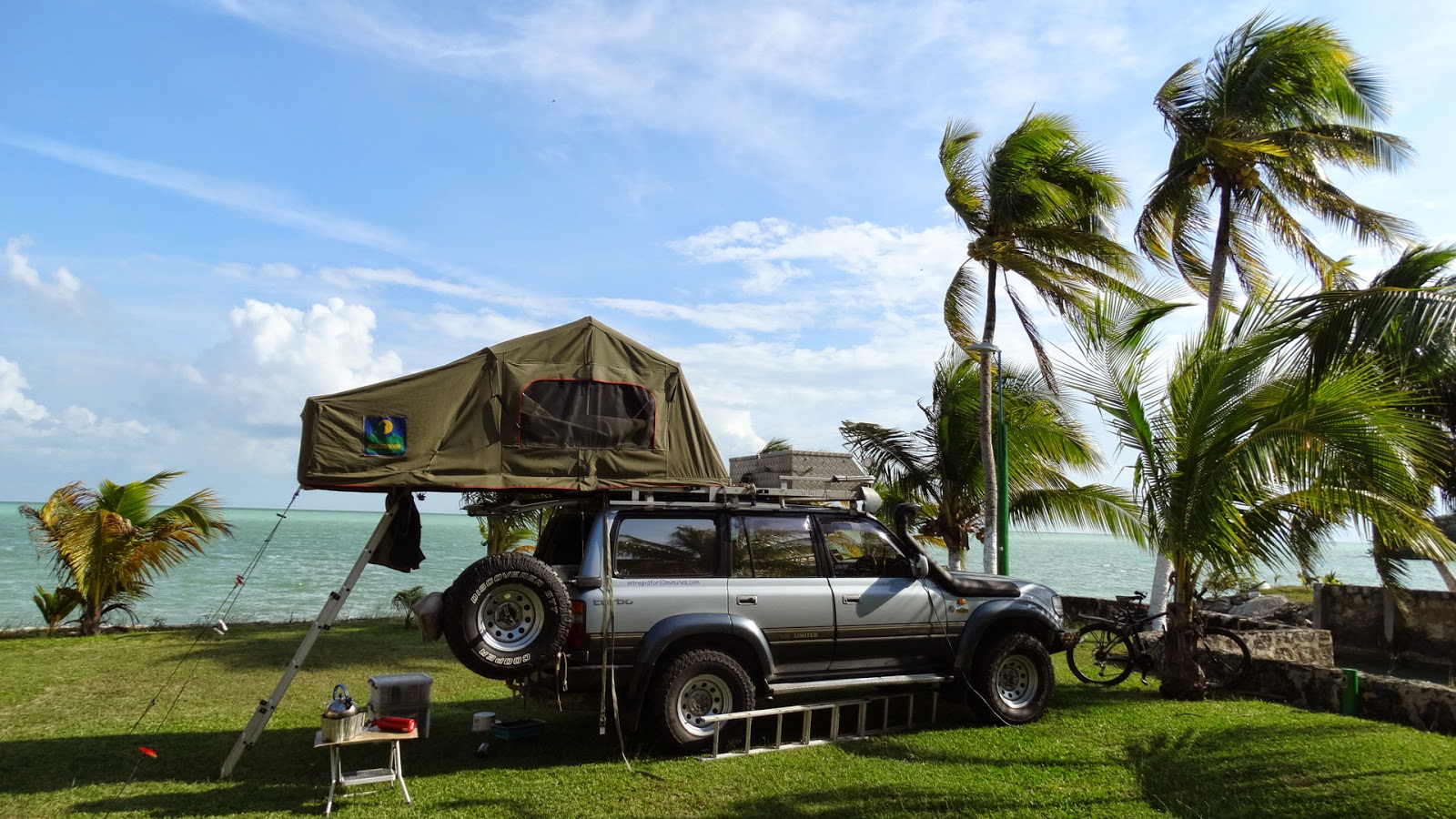 Happy New Year - we had the cruiser cleaned yesterday, took the guy two and a half hours! We just wanted the mud washed off, but he hosed it, washed it, leather-ed it and polished it and also gave us a beer while we waited.

Tomorrow we cross into Belize.
Posted by Mick at 17:26