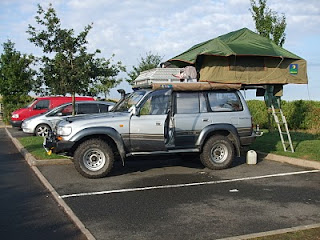 First night on the road, at a Motorway Service Station somewher in France. 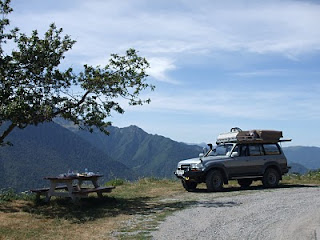 We actually managed to find one partially unpaved road in the Pyeranees and found this superb spot for lunch. 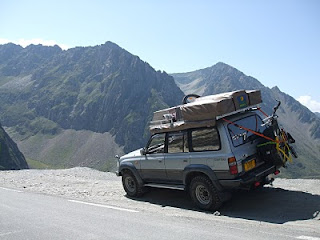 Just over The Col de Tourmelet 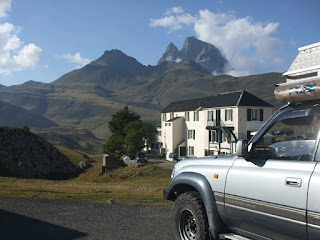 We arrive in Spain 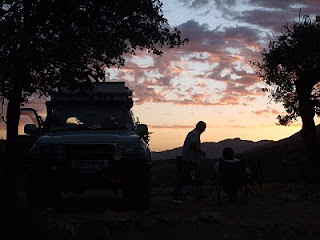 First Wild camp in Morrocco, having a beer before we put the tents up. 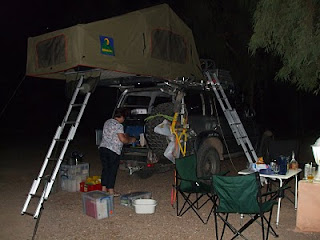 Second off road trip in Wales with Graham, this time with Pete and eldest daughter Sarah. A few other vehicles turned up this time. The highlight was us pulling Graham out after getting beached in snow.

Follow the following link to watch Sarahs 3 short films of the wekend on u tube http://www.youtube.com/user/aliasproductions2005?feature=mhum#p/u/3/R8ZNKkwIZd8

Following this weekend we decided to join Grahams trip to Morocco later in the year, but 5 weeks before the trip 3 of the 5 vehicles pulled out forcing him to cancel. We had already booked Chris's flight to Madrid and back from Marrakesh and Sarah had also booked a return flight to Marrakesh to join us for a week so we were going regardless. We had been debating whether to go it alone anyway and had also been debating whether or not to have a winch, so bought a winch instead.

Over the following months the cruiser went to Footloose 4x4 for a major overhaul/refurb of all of the suspension and running gear , including a 2" lift with stronger springs. We added an additional tank, National Lunar 50l Fridge Freezer and ordered a new design of Howling Moon Tent (The Stargazer, with Windows in the roof as well as all around). This was touch and go as it got delayed in a dock strike in South Africa and we finally had it fitted the weekend before we left for Morocco. Our first night was on the in laws drive, which caused great interest amongst the neighbours.

Prior to setting off for Morocco we met up with Graham in Wales once more, did a couple of routes in the new configuration (minus roof tent) and he gave us his intended route and all of his notes. This plus Chris Scott's book was really all we needed. 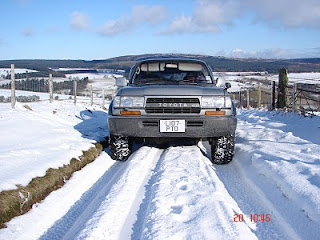 After staying at Fritz Manor (an apparantly haunted B & B) we met Graham (Tracks Overland) at Llangollen for our first off road adventure. It had been snowing for days and the other 3 vehicles supposed to be joining us cancelled due to the weather so we had Graham to ourselves. The weather was amazing the whole weekend, the cruiser trundled over everything and other then Grahams Landrover having a fuel leak which which lost us Sunday morning it was a superb first weekend.

Thus far the only vehicle changes were 16" steel wheels (to replace the 18" alloys) plus Micky Thompson MTZ's
Posted by Mick at 02:05 No comments: 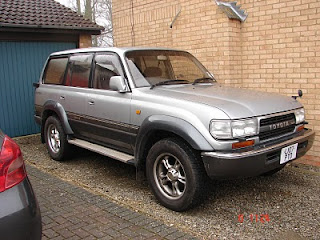 The time had come. After looking at a few ageing cruisers we went to Chequered Flag in Halifax, where they had no less than 5 for sale. One in particular stood out and after a drive round the block I new that this would be the vehicle we would drive round the world. And so began a new chapter in our lives. 15 years old, 122,000 miles and in superb condition, no doubt it would get a few knocks along the way but at least they would all be mine.