The reason for spending Christmas at Cochabamba was two-fold, one was that we had been told of a Hostel that had a large garden for camping, a large indoor space and a large kitchen, but also there were lots of good mechanics and body shops around at very reasonable prices. So the plan was to get the truck serviced, the door repaired or replaced from the accident, and also to repair some bad corrosion around the rear windows.

The plan worked out in as much as the camping place was good and we had all the mechanical work completed prior to Christmas, but they needed 5 days for the bodywork so this was booked in between Christmas and New Year. It was also good in as much as there was a good crowd in the Hostel and Steve (who we bumped into as we left the Road of Death, after not seeing him seen since last New Year in Mexico) came to join us. We all went to the supermarket and managed to buy turkey and most of the trimmings for a proper English Christmas Dinner that everyone joined in with.

However, whilst all this was going on things went from bad to worse at home, dad (93) had been taken into hospital and then mum fell whilst visiting him, cracked her hip, broke her finger, and was also in hospital. We then had lots of debates as to whether I would go home alone for a short visit (we could only leave the truck for a few weeks in Bolivia) or whether we should make the 2,000 mile drive to Uruguay (where we can leave it for 12 months) so we could go home early (we were going home from April to September).

Initially, dad appeared to be making a good recovery and mum went home after a couple of days, so we elected to abandon the work on the truck and set off on the drive to Uruguay on the 28, but as we had booked our flights through an agency in London we could not change them until the 29th. What we did not appreciate is that Christmas is the main holiday period in Argentina, so the country is virtually closed between Christmas and New Year and all flights are fully booked, so the earliest we could get a flight was 12 Jan.

The first days drive was long and hard through the mountains, at the end of which we managed to find internet only to learn that dad had passed away that day.

The following day we decided to take a 'short cut'. The main road looped round through a number of small towns and then through Santa Cruz (one of Bolivia's major cities) so we took a secondary road that appeared to go direct to a point after Santa Cruz and looked to be around 30 miles (instead of the 65 miles on the main road) - Wrong. Turned out to be 57 miles of basically farm track, with more river crossings than we ever did in a day in Mongolia, and took 4 hours. It did however make me think of my dad a lot, he loved driving and always said that his favourite roads were the ones with grass growing down the middle and most of these roads were just that (or worse), he would have loved it.

Once we got back on the main road we set a good pace and completed the 2,000 miles in a total of 7 days and fortunately found some indoor parking for the truck quite quickly, so now it was just a question of waiting out the days before we fly home.

It is strange how things work out.


We first met Mike and Shannon (Americans travelling on motor bikes) in Mexico and met up with them again on numerous occasions throughout Mexico and Central America and finally said our goodbyes in Panama on the day we flew back to the UK and they took a boat to Colombia. As they left they told us that they had been sent a replacement inner tent from the US to Panama but it had been delayed at customs and asked us to collect it for them when we returned to Panama.

This we duly did and have carried it them for the last 7 months. When we returned to Panama we were 11 weeks behind them, but rather than catch up we got further and further behind. When they brought forward their planned shipment from Montevideo to Belgium to before Christmas we said that we would never catch up with them!

They were originally due to ship on 24 Dec, this was first delayed to 4 Jan and then again to the 18 Jan, we are parking just outside Montevideo before flying back from Buenos Aires so suddenly we would both be in the area at the same time and finally able to hand over their new inner tent.

The Sting in the Tail.

After all that it was the wrong bloody inner tent and did not fit at all!!! 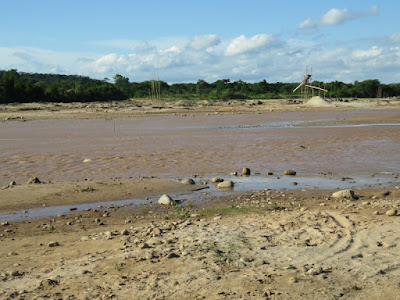