Intrepid For 10 Minutes rides again (this time in comfort)

With the Land cruiser still in South America and us spending more time in Europe we bought a hi roof, long wheelbase Renault Traffic and have had it converted to a camper and after 2 short trips in the UK we crossed from Dover to Calais on 6th September and headed south.

Our first target was to catch up with Paul who was cycling the length of France (from St Malo to Sete), had circumstances been different I would have been cycling with him, but fitness dictated that this was not possible. We caught up with him in the Dordogne and because the forecast was so bad for the next few days he reluctantly accepted a ride with us down to the Carmargue. Where, although the weather was good the wind was horrendous and my plan to cycle with him failed after about 8 miles and I just let the wind blow me back to where I started (even Chris was struggling on her electric bike!). Paul did manage to cycle on to Sete and we followed on in the van.

After Paul flew home we crossed into Spain and then headed East for Portugal. We had intended to cross the Pyrenees, but again the forecast was for heavy rain for the following few days so we took the good weather route.

By the time we crossed into Portugal a cold that had started in France had turned into Bronchitis and having had this before I knew that it would not go away without antibiotics. I discussed the options with the camp site owners at Lamego and took their advice to go to the local hospital and a couple of hours later, after blood tests, chest xray and 45 minutes on oxygen (not sure what that was about, maybe they thought I had Pneumonia) I left with the appropriate prescription, and I must say the service was excellent!

After a week recovering we carried on down the Douro, then doubled back to the border and south, visiting many of the old castles along the border down to Evora. But then we heard that Chris's Mother had been taken into hospital. Although she was only in overnight our daughter Sarah went over for a couple of days and said she thought someone should be with her, so Chris took the decision to fly home. Unfortunately flights were in turmoil with loads of flights being cancelled, but we managed eventually to get a flight from Lisbon and our other daughter Jenna, picked her up from the airport.

I carried on as planned, spending a couple of days with friends near Seville and then on to our house in Spain to either put it on the market (as we are now travelling too much to go there) or look into long term rental.

After a coupe of weeks of painting internal walls and seeing friends I, in many ways reluctantly, headed slowly home (reluctantly as although late October the weather was still amazing), spending a day cycling on the Via Verde, another night with our friends near Seville and then back up through Spain and France to Calais. Finally leaving summer behind in northern Spain, spending a few days of autumn in France and arriving at Dover in the Winter! 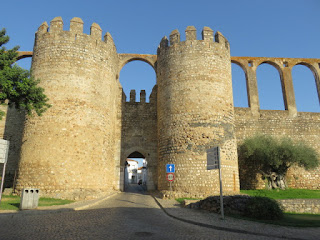