Back from the Abys

At the end of the last blog we had just been to my fathers funeral and having decided to stay home until September (the original plan was to come back in April and stay to September) we started to make plans for the next 8 months. Top of the list was to get my mother into sheltered accommodation and our daughters wedding in July, plus a couple of months touring with the caravan in Europe later in the year.

However, I had been getting some blood in my urine for some weeks before returning and as soon as we were back from the funeral I arranged an appointment with the doctor. I had some symptoms which I thought attributable to kidney stones and the doctor agreed but sent me for tests in case of any 'nasty's' in there. 2 weeks later I was in hospital for the tests. Ironically, that morning there was big news about a new method of cancer treatment being tested. This was also on the radio on the receptionist desk and started me thinking 'what if this is cancer?' Up to this point I had not given it any consideration. during the 20 minutes whilst I waited for my turn I started to consider the implications. Thus, when they inserted the camera into my bladder (not a pleasant experience) and found a cancerous tumor at least I had prepared myself for it!

3 weeks later I was admitted to hospital and the tumor was removed. Since then I have had 2 more operations and 2 courses of treatment after which they confirmed that the bladder is clear and the last biopsy confirmed no trace of the cancer. But, it was a very aggressive form of cancer and was close to going through the bladder wall (which would be a serious game changer), which has resulted in frequent checks followed by preventative treatment.


This somewhat changed our plans, our 2 months in Europe turned into a 2 week flight to Spain, but we did manage to move my mother into a bungalow in a really nice sheltered village, just down the road. She has made new friends, joins the knitting and sawing group and is a regular at Friday Bingo (which she had never played before she came here). Our daughter had an amazing wedding and we fly back to Uruguay tomorrow. But where as the original plan was to return in September and come back next May, we now have to come back in November for me to have another check-up and more treatment. From then on the checks are 6 monthly so we will then fly back to Uruguay in late Jan early Feb until May.

We park in Uruguay as it is the only country in South America that allows 12 months vehicle entry and we are going back now to take it out of Uruguay to re-set the 12 months permit (the current 12 months is up on Jan 3), which we would miss if we stayed until after the next op).

I thought hard before writing this as it is designed to be about our travels, but decided that it was part of our life and therefore should be part of the blog and also as a warning to anyone, especially other travelers that if you start peeing blood, get it checked. If I had not come home 3 months early because my father had passed away and I had not had it checked until April, the cancer by that time would have broken through the bladder and the consequences are unthinkable.

Having said that there were lots of good things that happened over the past 8 months. 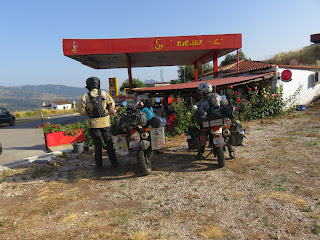